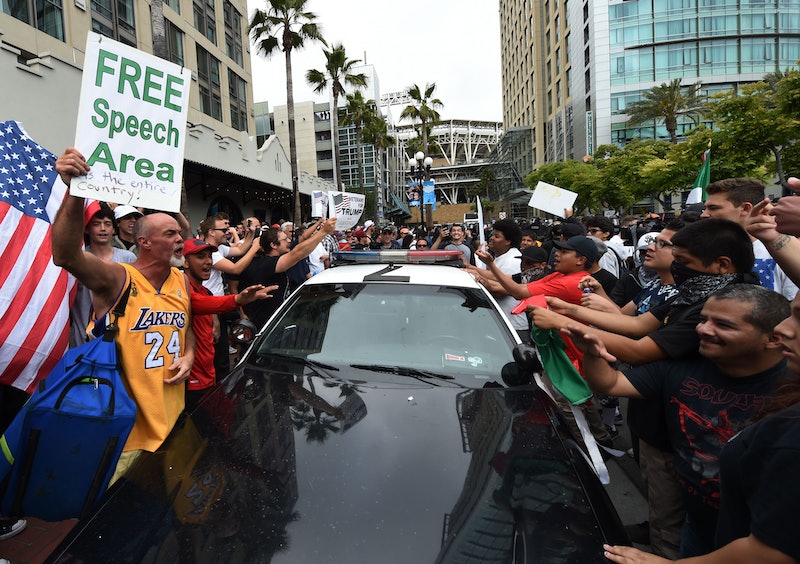 A protest outside a Donald Trump rally in San Diego turned violent Friday, raising more concerns over the likely Republican nominee, his presidential campaign, and his unapologetic rhetoric about race and immigration issues in America. According to reports, Trump supporters and local police clashed with anti-Trump protesters outside the San Diego Convention Center, where the presumed GOP nominee was holding a campaign rally in advance of the California primary. The anti-Trump demonstration targeted the candidate's harsh immigration policies, which are primarily aimed at Latino immigrants.

Although Friday's protest started out peaceful, the demonstration reportedly ended with riot police, batons and pepper spray. CNN reported that riot police were called in to disperse the anti-Trump protesters. When the protesters didn't leave, law enforcement officials reportedly began using their batons to push the large crowds away. The news source added that pepper spray was used on some of the protesters.

The San Diego Police Department tweeted Friday afternoon at 3:30 p.m. PT that several protesters attempted to "breech a secured area." An hour later, the police department declared the assembly "unlawful" and told protesters it was illegal to remain in the area. Then, the San Diego Police Department tweeted that riot police were forced to move in after "violence and physical confrontation."

San Diego police confirmed that 35 arrests were made during Friday's protest. No injuries or property damage were reported.

Earlier in the week, San Diego Police Chief Shelley Zimmerman told reporters during a news conference that "violence will not be tolerated" when Trump comes to town. Zimmerman made that announcement following the fiery protests in Albuquerque, where anti-Trump demonstrators reportedly threw burning T-shirts and other items at police officers.