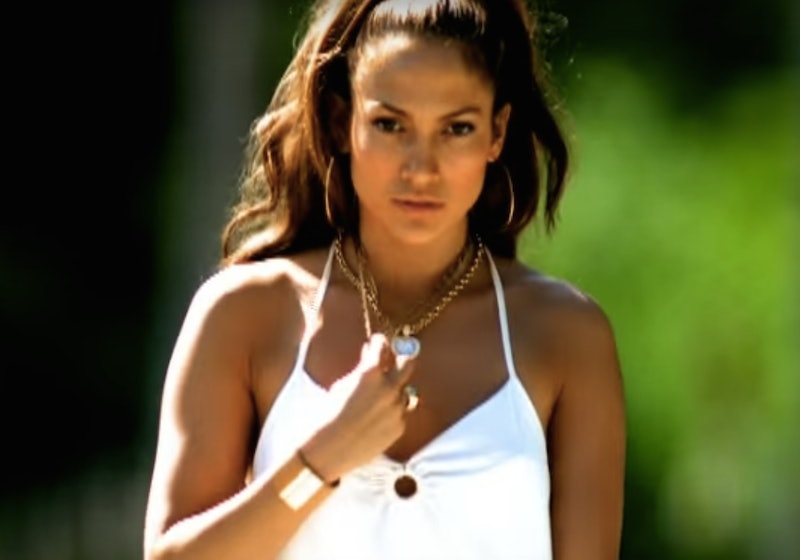 In the early aughts, you were nobody in pop if your music video didn't include an elaborate, over-choreographed mass dance routine. In those lazy, hazy days of 2000-2005, extra status points were won via, a, complicated constructs to incorporate your dance into the video narrative (think: Jennifer Lopez "Love Don't Cost A Thing" postcard dance troop or *NSYNC-as-puppets in "Bye Bye Bye") and b, matching outfits, a la Christina Aguilera's troop of sexy girl-boxers in "Dirrty" or B2K's mass denim look in "Uh Huh." But those days are gone. Today's pop royalty, whether Justin Bieber or Selena Gomez or Ariana Grande, insist on painfully dance-free music videos. I have zero idea if these artists are sexy, cool, lithe in the sack or if their crew's tight. There are no clues anymore.

So, without further ado, let's revisit the best dance routines the early '00s had to offer us. The ones you practiced for hours in front of your bedroom mirror so you could "effortlessly" introduce it at the next school dance.

It looks complicated, but it was actually so simple: jiggle your legs a lot, add in some angular posturing with your arms and snake your neck in staccato to the beat. Done.

You had to have serious 'tude to pull this dance off. Those snaky hip movements and aggressive shoulders were just plain ridiculous without the requisite bad girl credentials. Kind of an awkward one when rocking it solo, but hey, at least it was easy, right?

Not for the faint of heart — after all, in terms of footwork/falsetto, Usher's basically our generation's Michael Jackson. Honestly? Not sure anyone could pull this one off apart from Usher and his troop of painfully talented dancers.

The Sistine Chapel of music video dance routines. It's the best because it's not just aesthetically appealing, it's deep. That girl is playing them! They're puppets! She's making them dance for her affection! Ugh, I can't even.

Even when not constrained by a skintight red PVC catsuit and dancing on a planet with a regular level of oxygen, those moves were hard.

Don't be fooled by the snazzy matching camouflage — this dance routine was oh-so-possible for your average non-Beyoncé human.

Pre-solo career Justin Timberlake was so good: "Hey there, sassy girl." Also, those moves. Sure, the armwork was a little out there, but if your crew was tight enough (tight as *NSYNC! impossible) then this was your dance.

Pole dancing but not. Just go reinvent a whole genre of dancing, Mya.

Ride into your school dance on a motorbike and then thrust like there's no tomorrow. This is what twerking looked like in the '00s.

Miley Cyrus, Rihanna, and Ariana may all be a helluva lot cooler than the musicians on offer in the early '00s pop universe, but what they make up for in street cred, they lack in movement. So please, 2016's popstars. I know you can sing. Your Snapchat presence is seriously something. That fashion line on the side looks dope. But where oh where are the routines?

More like this
The Best Memes & Tweets About Beyoncé’s Surprise “I’M THAT GIRL” Video Teaser
By Brian Anthony Hernandez
Bridgerton’s Simone Ashley Stars In ODESZA's "Love Letter” Music Video
By Radhika Menon
What Is Ben Affleck's Net Worth? At 50, The Oscar Winner Makes 8 Figures Per Film
By Meg Walters
What Is Megan Thee Stallion’s Net Worth? The Traumazine Hitmaker Isn’t Worried About A Budget
By Hugh McIntyre
Get Even More From Bustle — Sign Up For The Newsletter