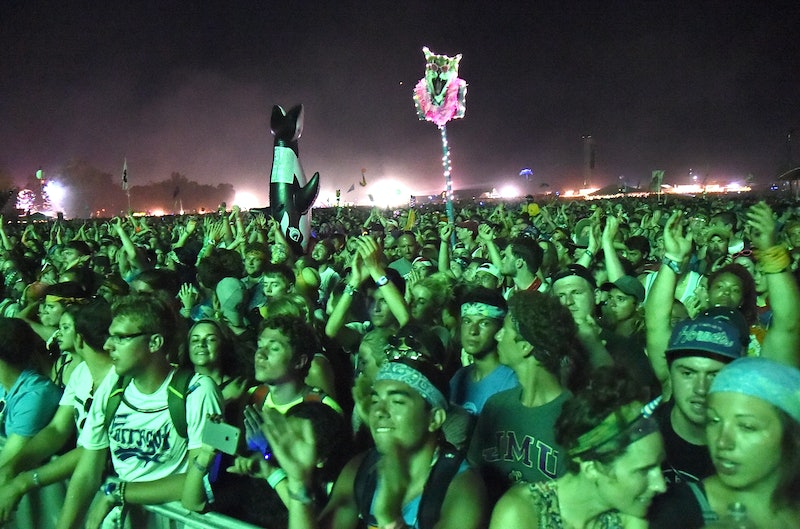 Coachella may already be behind us, but it's really Memorial Day Weekend that marks the start of summer, and therefore the true start of festival season. As music festivals have gone from a destination for hardcore music lovers willing to brave days of heat, dust, crowds, and bad openers, to every flower-crown-owning millennial in existence, it's hard to parse through the hype and decide just which are the best summer music festivals of 2016. Which multi-day orgy of sound and Snapchat should we prioritize? Which festivals offer both awesome tunes for the true believers and awesome Instagram opportunities for those who may not be "there for the right reasons" so to speak? (On that note, pitch to ABC: music festival of all aspiring musicians who have been Bachelorette contestants? I'd go.) Here's your guide to the best festivals of summer 2016.

Detroit has been cited as the birthplace of techno, and this event, formerly known as the Detroit Electronic Music Festival, launched in 2000. This year's event boasts dozens of artists and DJs (Richie Hawtin and Caribou among them), as well as a Kraftwerk multimedia event, and takes place on the pretty Detroit waterfront across the border from Canada. Checking it out is also a chance to get to know Detroit, which has awesome restaurants, shops, breweries, and a very legit burgeoning art scene.

On opening night, the much-missed LCD Soundsystem makes one of its first returns to the stage after a several-year hiatus. On night two, Radiohead will enact its debut performance of its recent album release, A Moon-Shaped Pool, which recently earned a 9.1 rating on Pitchfork. Another major highlight of Primavera is its location, steps from where Catalonia meets the Mediterranean Sea. Tickets are comparatively cheap (175 euros for three days) and the Airbnb scene is sweet — maybe skip the festival altogether and just hang in this villa? — but those coming from the states may be advised to not even attempt to fight the jetlag — the festival acts start in early evening and go until dawn.

This year's headliners include The Strokes, Kanye, and Robyn, and there are plenty of more obscure artists in attendance so you can make sure all your friends know that you've been into Father John Misty since he was playing with Har Mar Superstar in the mid-aughts. Ferry service provides convenient transport to the Randall's Island venue, in NYC's East River, and the food scene is serious, with vendors coming from some of the most-hyped eateries in the city.

A devoted Bonnaroo attendee doesn't leave the humid, hectic festival grounds each night to return to their air conditioned Airbnb — they camp on the premises for a more immersive, and unpredictable, experience. The festival features all this year's main headliners (LCD, Tame Impala, Haim), but brings a crunchier vibe with late night jam sessions and discos, and expands the typical festival experience with game tournaments, eco awareness events, parades, and people dressed like they think they're at Burning Man.

What used to be a traditional festival experience now seems quite unique amid today's modern events, which are highly produced, highly Instagrammed, and attended in large part by a millennial crew that often cares more about the scene than the music. Artists like Béla Fleck & The Flecktones, Emmylou Harris, and John Prine share the lineup with neo-hippie bands like Leftover Salmon and Yonder Mountain String Band, and attendees run the gamut: they're camping with their families, they're taking advantage of Telluride's rugged hiking and biking trails, and they're enjoying the state's recreational marijuana policy.

Those in the know pick this UK festival over Glastonbury. The independent arts and music festival takes place on the lands of a Georgian farmhouse, which encompass a lake with a floating party venue, art installations, and landscaped gardens holding 15 stages that this year will feature Caribou, Air, and Temper Trap. Revelers can join in on a "paint explosion, learn to fire walk or join a space safari."

Created by the same promoter behind Coachella, and taking place at the same venue as Governor's Ball, this festival has some big shoes to fill in its inaugural year — but its on its way with headliners like Arcade Fire, Kendrick Lamar, and LCD Soundsystem — I personally couldn't dream of three better main acts. Those who seek an inspiring female band or one-woman juggernaut will be pleased with the presence of Sia, FKA Twigs, Ex Hex, and other badass ladies. To set itself apart from the fray, Panorama will be going with an "advanced technology theme and interactive art installations."

Croatia has become a prolific destination for summer music festivals, and this one in particular is appealing for its idyllic location in a cove on the Dalmatian coast. The festivals sound is funky, all about drum & bass, acid jazz, hip hop, soul, and reggae, and this year's headliners include Pharoahe Monch and Calibre. Some concerts take place on boats in the Adriatic Sea, and there's a substantial art and film component to the long weekend. Also, there are donkey races.

More like this
Adele’s All-Female Lineup Includes Kacey Musgraves, Mahalia, & Self Esteem
By Shahed Ezaydi
Taylor Swift's “Carolina” Theme For 'Where The Crawdads Sing' Soundtrack Is Here
By Jake Viswanath
What Is Elvis Presley’s Net Worth? How The King Earned & Spent His Fortune
By Grace Wehniainen
'Elvis,' 'Walk The Line' & 10 Other Movies Where The Actors Actually Sing
By Radhika Menon
Get Even More From Bustle — Sign Up For The Newsletter