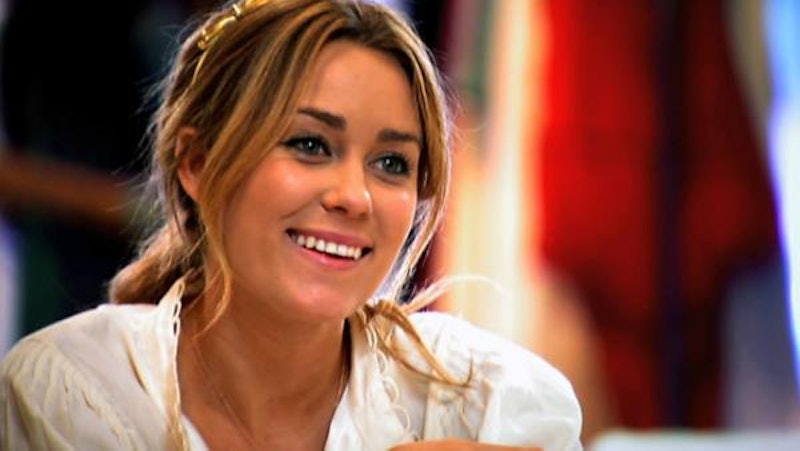 Before I moved to Los Angeles I was California dreamin' while watching The Hills in the dead of winter in New York City. The MTV reality series offered up warm visuals of the West Coast, along with an extra helping drama with a capital-D. Now that I live in the City of Angeles, I thought I'd check out The Hills filming locations then and now in Los Angeles in honor of the series' 10th anniversary. Can you believe it's been a decade since Lauren Conrad and Heidi Montag first charmed their way into our lives? I certainly can't.

Conrad first starred in the MTV docu-series Laguna Beach: The Real Orange County from 2004 until 2006. The Hills — a spinoff premiering in 2006 — focused on Conrad's new adventures as she moved to Los Angeles, where she attended the Fashion Institute of Design & Merchandising, interned for Teen Vogue, and made new friends. That is, until Heidi began dating a guy named Spencer Pratt and sparks flew. The drama multiplied like you wouldn't believe and served as the rest of the series' focus and gained lots of media attention for the feud, until Conrad exited the show.

Luckily, my life in LA has not been as dramatic, but here's a look down The Hills memory lane. Check out the filming locations then and now.

Where Lauren and Heidi initially study fashion and PR upon their arrival in Los Angeles. The school is located in Downtown LA.

Doesn't look like too much has changed at FIDM.

I'm going to be picky here: This is not the name of the apartment complex Lauren and Heidi lived in and it's definitely not in West Hollywood. According to The Daily Mail, they actually lived in the Villas at Park La Brea, which is located in neighborhood known as Mid-Wilshire, according to me. I'm not sure why the show wanted to designate it as West Hollywood — maybe that sounded cooler?

The real villas look like they had some painting and remodeling in the past decade.

You know, that super trendy sushi place the whole hang hung out at on Hollywood Boulevard.

This isn't another nightclub, but a trendy escape room paradise for the puzzler in you to conquer.

Then: Pinkberry On Melrose Ave

The place where Lo famously told Lauren to "eat her Pinkberry and enjoy life!" and where Audrina and Spencer went on a date.

Sadly, no one is eating Pinkberry anymore on this stretch of Melrose and La Brea Avenues. The Pinkberry has been replaced with Lucifer's Pizza. At leat M Cafe is still there.

The frequented hot spot by The Hills gang right off Hollywood Boulevard. It's also where Lauren and Heidi had their infamous "You know what you did!" blowout.

For awhile, Sadie Kitchen and Lounge occupied this space, but it has since closed. When I was there, there weren't any signs of life.

Known as the "Beautiful People Hike," Runyon Canyon Park is where you hike to people watch and see great vista of LA, so it's no wonder The Hills filmed here. Whitney and personal trainer Jarrett went on a hike here and he formally asked her out on a date with this gorgeous, smog-filled backdrop.

To the sadness of many Angelenos, Runyon Canyon is closed until July, which is right in the middle of prime LA hiking season for famous and regular people alike.

Heidi worked the opening for this upscale LA hot spot in West Hollywood.

Area closed and Greystone Manor took its place as an exclusive club, but Greystone closed for renovations earlier this year.

This trendy red-themed upstairs lounge was located on the Sunset Strip in Sunset Plaza in actual West Hollywood. It's where Lauren and Jason ran into Spencer and Heidi — and it was not good.

It's looks like what was once Ketchup is now a combination of a jewelry store, an Equinox, and a Verizon store.

It doesn't look like too much has changed at the store, other than the building coloring (lighting?) and the window displays.

The setting of many of Spencer and Heidi's dates. Spencer came to this West LA Mexican restaurant so often that he has a menu item named after him.

Don Antonio's still looks the same. I once hosted a dinner party here, and it's old-school, never-changing flair is all part of its charm.

More like this
18 Unanswered Questions From 'The Hills' That Still Haunt Us Today
By Ivana Rihter
Yes, You Can Really Charter Below Deck Med’s New Superyacht, Home
By Brad Witter
What’s New On Netflix: Lana Condor’s Ghostly Comedy & A Sexy Reality Series
By Arya Roshanian
Chrishell Stause & G Flip Have “No Rules Or Regulations” In Their Relationship
By Brad Witter
Get Even More From Bustle — Sign Up For The Newsletter