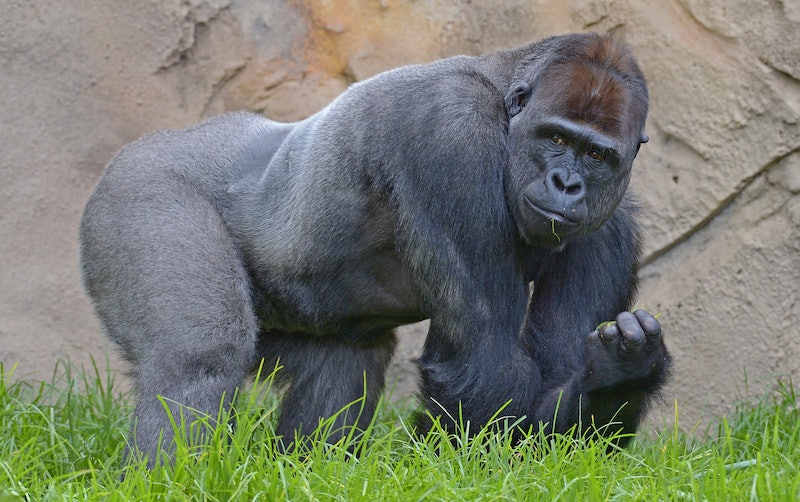 On Saturday, the Cincinnati Zoo shot and killed a western lowland gorilla to protect a 4-year-old boy who had entered the enclosure. The gorilla, a 400-pound male named Harambe, was part of a critically endangered species, according to the World Wildlife Fund (WWF). The zoo confirmed the incident at a press conference on Saturday, noting that although grateful that the boy had been rescued, the zoo team was devastated about the loss of the gorilla.

After reportedly climbing into the gorilla habitat, the boy was carried around by the male gorilla for about 10 minutes before the zoo's response team shot at it with a rifle. As CNN reported, the team chose not to use tranquilizers because they take longer to affect the animal. As such, the boy would have continued to be at risk. The boy was transported to a local children's hospital with non-life-threatening injuries.

Two female gorillas had also been in the enclosure at the time the boy entered the exhibit, around 4 p.m. local time. According to the zoo's statement on its website, those two females were immediately called back and removed from the enclosure. The zoo also confirmed that it would remain open during the holiday weekend, as it kicked off its summer season with shows, experiences, and discounted tickets for members of the military.

Critically endangered is one of the most dire scenarios for an animal species. The International Union for Conservation of Nature categorizes threatened species as vulnerable, endangered, or critically endangered. Beyond that, species are either extinct in the wild or totally extinct.

Saturday's incident in Cincinnati appeared to rattle an otherwise celebratory weekend at the zoo. Harambe was reportedly expected to father babies at the zoo, perhaps in an attempt to bolster the struggling population of western lowland gorillas worldwide. Although the zoo will remain open, the gorilla habitat was closed until further notice as of Saturday.

Bustle has reached out for comment from the Cincinnati Zoo.

More like this
The Families Of Grenfell Tower Are Still Waiting For Justice, Five Years On
By Bustle UK
How To Fight For Reproductive Rights, Based On How Much Time You Have
By Courtney Young
Boris Johnson’s Leadership Is In Question – Again
By Bustle UK
Your Dog Could Be So Much Better Behaved If You Tried Any Of These 25 Tricks
By Claire Epting
Get Even More From Bustle — Sign Up For The Newsletter