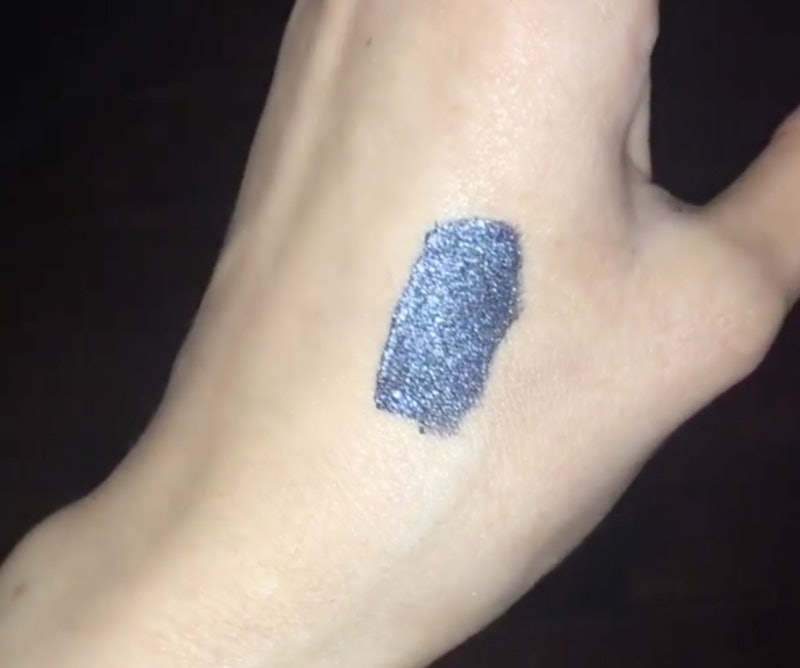 A filter and lighting can do so much to change the texture and the tone of a lipstick color in a photo. So can the person's skintone. When Kylie Jenner debuted Majesty, her matte black x blue Metal Matte liquid lipstick, it appeared to be Kylie Cosmetics' most versatile and edgy shade yet. Yes, it was adventurous, since it was not a neutral, which many of her Lip Kits and Metal Mattes are. It looked blue in some lighting, black in others, and had a silvery sheen, too. It's goth, it's rocker chick chic, it's intense, and it's dramatic.

Upon seeing Majesty, which has yet to go on sale, for the very first time, my initial reaction was that the shade was not exactly for everyone nor was it appropriate for wear every day or at the office. The latter still holds true, unless, of course, you work at a cool job with a super relaxed dress code or makeup policy. But after seeing Jenner's BFF Jordyn Woods rocking the Majesty Metal Matte, I was blown away.

This shade could veritably work for everyone because it's so multi-dimensional.

You can see the swatched version of Majesty in the video below. It has the gray x blue x black shimmer, due to the metallic finish.

If you want "LOOK AT ME!" lips, a couple of swipes of Majesty is the way to get 'em.

Here is Jenner rocking Majesty on her infamous pout. Consider the lighting, filters, her natural skintone, etc. It looked blue.

Woods also rocked Majesty, which was way more matte and rich on her lips. It also balanced out her super dramatic, sculpted brows. She wisely went with minimal eye makeup, since her lips and brows were the BAM! features. And yes, it does look breathtaking on her. It doesn't look as metallic in this shot, but who cares. It looks darn fine. She could have mattified it with some powder. It could also be the lighting.

But these are two different ways the same shade looks IRL.