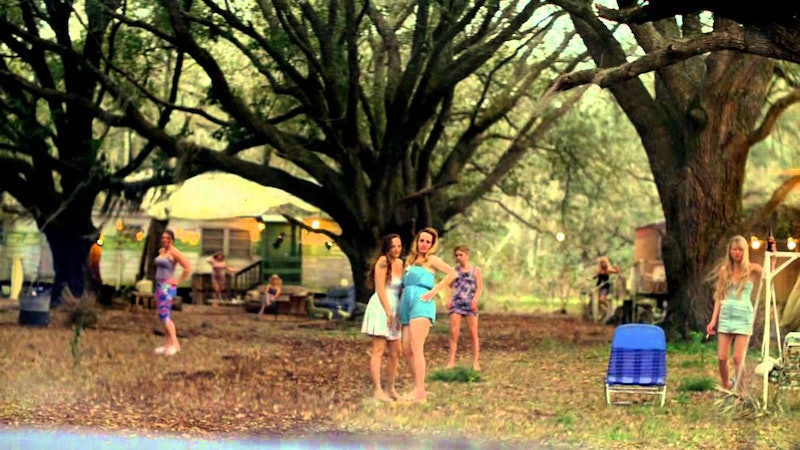 Since the first episode of True Detective , sex workers have played a central role in Marty and Rust's investigation of Dora Lange's murder. The initial clues come from sex workers at a truck stop, as do the quaaludes Rust desperately needs to get to sleep. As the show goes on, though, the relationships between sex, payment, and power grow stale, and the sometimes evolutionary stylings of the show fade to reveal troubling stereotypes about sex work.

As Emily Nussbaum of the New Yorker points out, the show's structure does not set up an excellent framework on which we can build our opinions of its "professionals," since it flattens their role to sometimes-abused sex toys. Its portrayal of sex workers generally falls into one of two categories: the sexually abused teenager, or the woman who was once a sexually abused teenager, who is now probably still being abused in some way. Even the madam of the trailer-bound "bunny farm" slips up during her supposedly feminist diatribe about sex work, when she states that one of the girls "ran out on her uncle." Although she brings up a great point about the relationship between ownership, power, money, and sex, the "it's our choice" rhetoric fails when she suggests that most of the girls on her compound ran away from sexual abuse.

Sure, the sex workers portrayed are making money, but how can they possibly be "choosing" this line of work when they have no other options? With this fallacy, the possibility of an empowered sex worker dies on True Detective.

Sex professionals on the show never get to experience in any positive growth, unless they leave "the business." Marty's attitudes toward the underage sex workers on the "bunny farm" show this perfectly: Instead of showing at least one woman who's sexual choices don't result from, or lead to, male rage and abuse, True Detective gives us sex workers who are abused by a system they desperately want to escape. Picture any of the many naked women in the show's last few episodes: Did any one of them look in charge of the scene? Many of the nude women on the show are strippers or exotic dancers, generally portrayed as working women surrounded by leers of bikers or ruffians who frequent their establishment. Viewers are meant to worry about their safety, especially since Marty implies that many of them are runaways or teenagers.

This portrayal is dicey enough as is, but True Detective also implicates viewers in the objectification of exotic dancers. Even if the "stripper" scenes look abusive, we are simultaneously offered money shots of thongs, nipples, and gyrating hips as some sort of titillating way to allow us to join in the leering. This contradicts any attempts to condemn the "villains" that pay these dancing women, because the audience is offered its own array of sensual shots. And don't forget, some of the naked bodies on the show are dead, and we all get to gaze at them, too.

Beyond the troubling implications of nudity on the show, though, lies the central tenet: True Detective's "case" is based on the gruesome murder of a sex worker whose life was out of control. Although they've dressed this trope up in exciting mystery and excellent storytelling, crime show audiences have seen it before. It was the center of the intrigue in Twin Peaks. It has cropped up at least once a season in crime serials like CSI. And with this trope comes the implicit warning that sex work is dangerous and victimizing, which True Detective has clearly shown at every turn.

But True Detective's problem with women extends beyond the series' sex workers. Most of the women on the show who aren't "professionals" have to use sex to gain validity. Marty's sexual encounter with Beth, the ex-sex worker, comes about because she has followed his ascent into power, and is attracted to it. The only redeeming fact about this power-tryst seems to be that Marty collected on his "down-payment" in an earlier episode, which paints him as a hypocrite. Even though Marty's hypocrisy is well-known by now, the power imbalance between Marty's motivations for sleeping with Beth is pronounced: the frequent shots to a bag of tampons imply that Marty feels "whipped" or "emasculated," so he sleeps with Beth. On the other hand, Beth sleeps with Marty because he has "been in the papers." Marty has sex with Beth because he's bored, but she has sex with him to be close to celebrity, or power. This means that even the ex-"professional" women on the show have to be sexual barterers, even if they aren't getting paid for it.

Whether or not the women of True Detective are "flat" characters, the sex workers are reductive clichés. And that's harmful for even the professionals who were not harmed like Dora Lange.