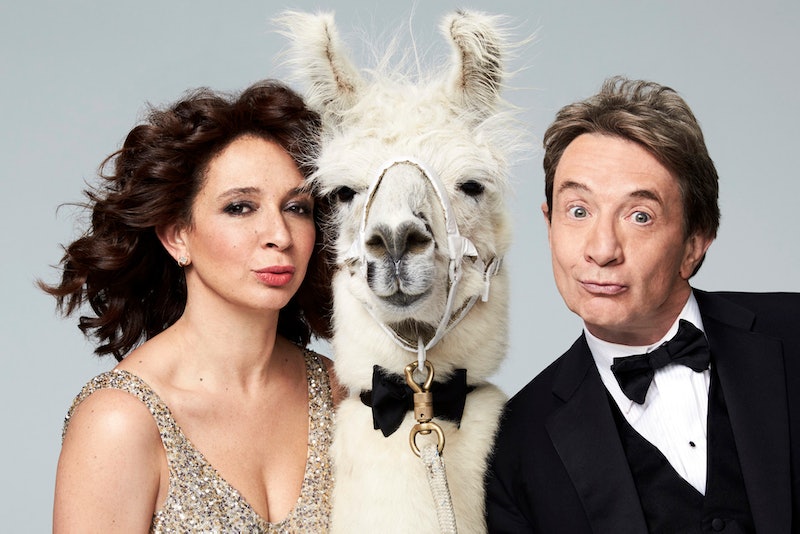 It's no secret that NBC's variety shows are top-notch and I can't wait to see what the May 31 premiere of Maya & Marty has in store. Produced by Lorne Michaels (who is basically NBC royalty at this point), the show will be lead by Saturday Night Live alums Maya Rudolph and Martin Short — and current cast member Kenan Thompson will join them each week. Another appealing aspect of the show is the weekly celebrity cameos on Maya & Marty. So, what famous faces can we expect to see this season?

Aside from the premiere episode, it looks like we'll be kept guessing — but that'll be part of the fun. Deadline and other outlets named the four celebs who will appear on May 31 and the eclectic mix of A-listers means this is probably going to be one heck of a premiere. Plus, it would be an understatement to say that Rudolph, Short, and Michaels are well-connected in the entertainment world — so I think we can expect a season full of amazing and hilarious guest spots.

Let's take a look at the celebrity cameos we have to look forward to on the freshman season of Maya & Marty — and a few unconfirmed entertainers who I really hope will show up at some point.

The one and only Larry David will appear in the premiere episode of Maya & Marty. It's safe to assume that the creator of Seinfeld and Curb Your Enthusiasm (who also does a spot-on impression of Bernie Sanders) will do a pretty, pretty good job of helping Maya and Marty kick off their show.

One of the most beloved actors in show business will also be on hand for the series premiere — and, like pretty much everyone else in the world, I'm always happy to see Hanks on my TV screen.

Fallon and Rudolph go way back — they were series regulars on Saturday Night Live at the same time, and I can't wait to see these two reunited on the small screen.

Cyrus will also appear in the series premiere and, although I have no idea what to expect from her, I'm fairly confident that she'll keep things interesting.

He won't be in the premiere, but Entertainment Weekly reports that Drake will appear in one episode of Maya & Marty this season.

So, Who Else Should Appear This Season?

We've been left hanging for the rest of the season, but that won't stop me from speculating. Here are some friendly suggestions for Rudolph and Short.

It'll be surprising if Fey and Poehler don't make appearances on Maya & Marty this season. The three worked together on Saturday Night Live and Rudolph had a supporting role in Fey and Poehler's 2015 comedy, Sisters. Plus, she made a special cameo on SNL when Fey and Poehler hosted the Christmas episode — so to say that they're supportive of one another's careers would be an understatement.

Martin and Short worked incredibly well together in the film Three Amigos!, which was produced by Lorne Michaels. Could we please reunite this team for an episode of Maya & Marty this season?

Murray showed off his singing chops in A Very Murray Christmas and I'd love to see him onscreen with Maya Rudolph again. Therefore, I'm officially adding Murray to my guest star wish list.

The premiere of Maya & Marty looks amazing and I can't wait to see which celebrities surprise us this season.