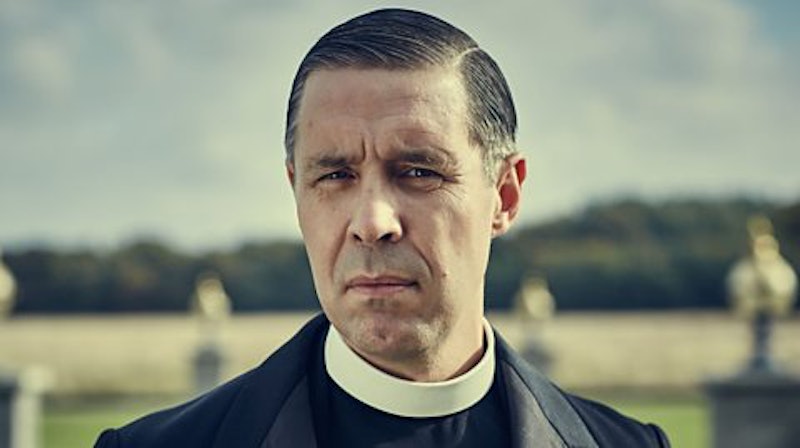 As head of the Peaky Blinders gang, Tommy Shelby (Cillian Murphy) has had a few run-ins with some unsavory characters. There's Major Campbell (Sam Neill), who made Aunt Polly do some terrible things to spring her son out of jail. There's Alfie Solomons (Tom Hardy), a violent gang leader who betrayed him on a dime. There's Billy Kimber (Charlie Creed-Miles) and Darby Sabini (Noah Taylor), rivals who have gotten in his way — to their (bloody) detriment. And let's not forget all of the people who have manipulated Tommy for their own political purposes. But, in Peaky Blinders Season 3, which hit Netflix on May 31, Tommy's going to come across a villain more vile than the rest of them. So, who is Peaky Blinders ' Father John Hughes, played by Paddy Considine?

Series creator Steven Knight summed it up very nicely in an interview with Crime Scene Magazine, quoted by the Independent, saying Father Hughes is "a priest — not a nice person." Well, obviously. No one on Peaky Blinders is really a nice person. So, how does Father Hughes fit in with the rest of the gang members, thugs, and criminals that populate the series? Let's take a look at the new face that's going to be causing a lot of trouble for Tommy. (Watch out: spoilers for Season 3 ahead.)

He's A Member Of The Economic League, Who Hide His Terrible Crime

Also known as Section D, the Economic League a nefarious organization, to be sure, but, also very powerful. And remember how Knight said Father Hughes is not a good person? That's putting it lightly, because Hughes is a pedophile, and the Economic League protects him from any punishment. The League is a force to be reckoned with, and Tommy is going to try.

He Likes to Throw His Weight Around

"He loves to show Tommy who’s boss, ordering him down to London on the milk train for a meeting with an exiled Russian aristocrat," the Birmingham Mail wrote of Father Hughes. Woe betides the person who sends Tommy on wild-goose-chase errands, though, so Father Hughes better watch out.

He's Not In The First Episode

Father Hughes doesn't make his entrance until the second episode, so you get a one-episode breath before you have to start dealing with his ickiness.

An evil, pedophile priest needs a heavyweight actor behind him to keep the show from becoming totally tacky. Considine, who has been excellent in movies like In America, Submarine, and the Edgar Wright movies, is the right call. "Paddy Considine is one of our best actors," Knight said in the same Crime Scene Magazine interview, "so to have him, Tom Hardy and Cillian Murphy is fantastic." It's a great cast, to be sure, but that doesn't mean you like their Peaky Blinders characters, as Father Hughes demonstrates in Season 3.