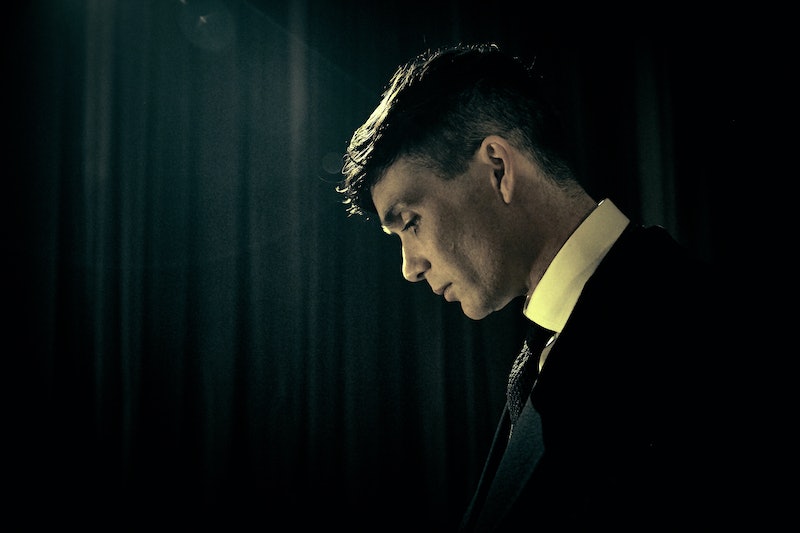 How's your day? Did you get a good breakfast? Are you hydrated? Good, because May 31 marks the arrival of Peaky Blinders Season 3 on Netflix and we all know that the physical toll of a good, solid marathon is no joke at all. But before you embark on your 600-minute adventure through the dark and crime-ridden streets of London in the 1920s, let me fill you in on the true lives behind some of your favorite Peaky Blinders characters. It's no secret that the show's true MVP is Cillian Murphy as Tommy Shelby, the head of both the Shelby family and the often fearsome Peaky Blinders gang, but the question remains, is Tommy Shelby based on a real person?

The answer, unsurprisingly, is pretty complicated. The BBC delved into the history of the real Peaky Blinders, an actual gang that took prominence in the UK during the late 1800s and earned their name from a tendency to sew razor blades into their caps in order to blind their victims and render them easy prey for petty theft. But just because the gang really existed, that doesn't mean Tommy Shelby did too. Peaky Blinders is hardly a non-fiction series.

The show is set in the 1920s, which was towards the end of the real Peaky Blinders' heyday, but the BBC Two series has kept intact the super-jaunty style of silk scarves and bell-bottom trousers. Similarly, what the character of Tommy specifically seems to have in common with real Peaky Blinders is his appearance. None of the names BBC listed as real former members have Shelby as a surname, so he was not a real person, but take a look at their photos and you'll see that the casting was perfect, as Murphy could fit right in with the real Peaky Blinders.

Stephen McHickie, shown below in the Peaky Blinders cap, (which according to the Daily Mail has helped boost modern-day billed hat sales by 83 percent), especially sseems to resemble Murphy, with his high cheekbones and prominent ears. McHickie apparently lacked the nine lives of Tommy Shelby though, as according to police records detailed by the Daily Mail, he was charged with breaking into a shop only a few doors down from his own home at the age of 25.

According to the same police records, it was overwhelmingly common for members of the Peaky Blinders to be much younger than McHickie's 25 years, which helps to make Joe Cole's very youthful John Shelby on the BBC Two series even more believable. In fact, Cole greatly resembles Ernest Boyles, a young member of the gang.

Though the Shelby family may only share some facial characteristics with the Peaky Blinders of history, there have been other characters with real life inspiration. Billy Kimber, a character in the show's first season, was the name of an actual gangster, a member of a criminal group known as the Brummagem Gang, according to the Birmingham Mail. Kimber is portrayed on Peaky Blinders as a crooked gambler, which lines up pretty closely with Birmingham Mail's description of the real Kimber.

It looks like Peaky Blinders is happy to exist in the territory of historical fiction that it does so well. While some characters, like Kimber, have specific, real origins, Tommy and others seem to be based more generally on the Peaky Blinders as a whole. They may share some facial characteristics and clothing choices with the real gang, Peaky Blinders' central characters mainly bring fiction into a historical setting.

More like this
17 Hilarious British Comedies On Netflix
By Sophie McEvoy and Sabah Hussain
A 'Bridgerton' Star Just Dropped A Major Hint About Joining The Live-Action Barbie Cast
By Bustle UK
'Ghost In The Shell: SAC_2045' Was Only Supposed To Last Two Seasons
By Kadin Burnett
What’s New On Netflix: 'Stranger Things' & 'Somebody Feed Phil' Return
By Arya Roshanian
Get Even More From Bustle — Sign Up For The Newsletter