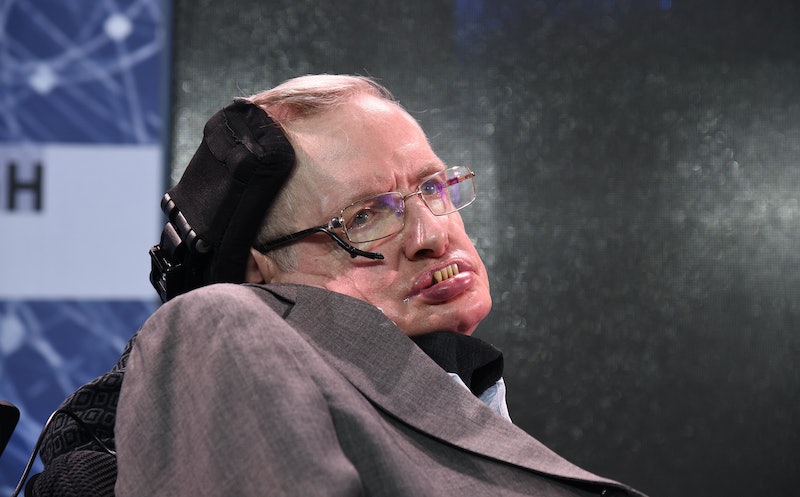 Few aspects of Donald Trump's road to becoming the presumptive Republican nominee have been predictable. His rise is a head-scratcher (and, for that matter, a headache) to many of the most seasoned pundits. The University of Virginia's highly-esteemed Center for Politics scholars even declared in a September 2015 newsletter, "Friends, there is no way on God’s green earth that the Republican Party hierarchy is going to allow Donald Trump to be their nominee for president." But, perhaps, the leading expert on quantum mechanics could shed some light on Trump? Stephen Hawking offered his analysis of Trump and while he said he was perplexed, he may have provided one of the simplest and sharpest explanations for the Trump phenomenon.

Speaking to Good Morning Britain, the author of A Brief History of Time was asked to explain Trump's popularity and Hawking professed, "I can't." However, he then described Trump as a "demagogue" (no shocker there) and added that he "seems to appeal to the lowest common denominator.” While those handful of words may have been a one-off remark from Hawking, they actually may encapsulate Trump's seemingly improbably political success better than any columnist who's been covering Washington D.C. for decades or a tenured political science professor could.

Even if Trump doesn't take the White House, people will be analyzing his campaign for decades to come — a bombastic reality TV star with zero political experience, a noted record of flip-flopping, and an eagerness to insult women, minorities, and people with disabilities defied the Republican establishment in one fell swoop. How? Well, as Hawking said, by attracting a following through the "lowest common denominator" — also known as fear and distrust.

According to a Pew Research Center survey from fall 2015, only 19 percent of Americans trusted the federal government to "do what is right always or most of the time," and that dropped to just 11 percent among Republicans and Republican-leaning independents. Trump certainly tapped into that distrust with the federal government, and he played — rather, he still plays — to Americans' concerns about our safety and security. A survey from the non-partisan Public Religion Research Institute from December 2015 found 75 percent of Americans believed terrorism was an important issue facing the country, up from 53 percent just four years earlier in 2011. It also found 47 percent of Americans feared a loved one would be a victim of terrorism, up from 33 percent just a year earlier.

Trump has deftly exploited the growing common fears of outsider attacks combined with the increasing belief that the government is not to be trusted, including when it comes to protecting citizens. Without actually offering substance or sense, Trump has appealed to people's darkest concerns and ugliest beliefs. The "lowest common denominator" strategy has worked for winning the Republican nomination. Whether the better angels of our nature win out will be determined in November.