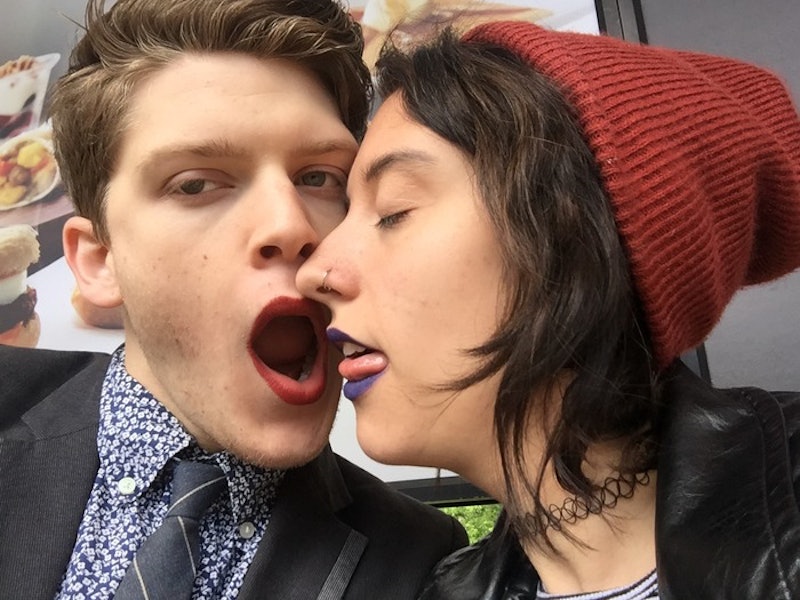 Before my current relationship, much of my dating life consisted of pained efforts in trying to conceal the "gross" things about my body. It was difficult for me to feel positive about natural bodily functions in intimate settings, when many of my partners perceived sweat, blood, poop, and farts to be major turn offs. For that reason, I never felt as though I could truly be my full self around anyone I dated.

When I met Skylar, however, I didn't feel the same judgment. Although people of my past thought it unfit for feminine humans like myself to fart and sweat, Skylar was different. Part of this could be down to the fact that Skylar is the first partner I've ever been honest with when concerning my non-female gender identity. But I believe the majority of it is simply down to them being a good person. They don't wish to censor or police the body of their loved one. In fact, they take that sentiment one step further.

Skylar has a knack for making every "gross" thing about my body seem endlessly attractive in a half-teasing, half-genuine sort of way. For example, my body is pretty much a never-ending stream of congestion. I used to be incredibly self conscious about this thanks to being called out by multiple people. But whenever I clear my throat to hock up a loogie around Skylar, they make purring noises as if what I'm doing is sexy. Once, they even said, "Baby bird it to me!" I didn't, but their attitude helped me laugh off my insecurities, and clear my throat around them without feeling repulsive.

Many couples that have been together for over a year have likely gotten to a point of being more comfortable when it comes to doing things like farting or peeing in front of one another. But for many of the couples I know, there is still some measure of disgust to such actions that contributes to one partner feeling stuck in a certain negative opinion about how their body functions.

I've seen this in countless of my friends' relationships, as well as that of my parents. Everyone in my immediate family is comfortable with farting in front of others. My dad, who is undoubtedly the loudest farter in the house, gets to enjoy this the most. However, he has told my sister and me multiple times that farts aren't "ladylike."

My sister and I are much too stubborn and secure in our gender identities to ever react or be repelled by his disapproval. But when it comes to my mom, my dad gets grossed out and asks rude questions about her bathroom needs whenever she lets herself pass gas around him. Each time, she is discouraged, and each time, I have to comfort her with loving words or a fart of my own. Seeing this makes me feel extra grateful for my own supportive and respectful partner. The small body positive actions Skylar takes, especially when directed at something I was previously told was gross, make a huge difference in how I feel about my body.

My friend and editor Marie Southard Ospina can relate to this feeling with her partner, Patrick. "I remember the very early days of our relationship," she tells me over GChat. "I was so embarrassed of things like farting in front of him. Well, in front of anyone. Same with sweating. I would carry around paper towels with me to stuff down my bottoms to avoid swamp ass."

But Patrick's body positive attitude soon became apparent to her. "He was one of the first people to introduce me to the simple idea that bodies are, naturally, kind of gross," she adds. "And that's OK! In the time since, I've felt so much more comfortable with everything natural that my body does. It bleeds, it sweats, it smells bad sometimes, it farts, and it's magical."

We both agreed that de-stigmatizing the things feminine people "aren't supposed to do," like fart or sweat, is undoubtedly helpful to our psyches. With so many people (arguably men especially) holding narrow ideas of femininity and of how their feminine partners should exist, it's refreshing to hear a new outlook from our current partners. But even things women are "supposed to do," like get their periods, are often treated with disgust. For instance, many men seem to either jump away from any semblance of a blood stain, or feel extremely proud of themselves for buying us a box of tampons while we remain on menstrual cramp-fueled deathbeds.

Back in the day, I was incredibly insecure about leaks during my periods, and any vaginal bleeding at all. After a partner reacted with horror at an old blood stain on my sheets, I did whatever I could to hide the fact that I was a living, breathing, bleeding human. Period sex was absolutely out of the question (which is a shame, since I'm extra sensitive and horny when I'm menstruating), and I dreaded sleeping next to anyone when that time of the month was approaching. I'll never forget the night I leaked through my panties while sleeping next to a particularly judgmental partner, and trying to extract the stain from the sheets in an anxious frenzy.

My good friend Winnie McNally has had similar experiences with past partners, and was surprised at her current partner Kurt's reaction to the idea of sex while on her period. "We were making out a little while ago and I was bummed because I had my period and had my Diva Cup in, so we couldn't have sex," she tells me in a text. "I thought that nothing sexual was going to happen because I'd assumed that all boys are horrified with anything period-related. But he actually asked, 'Can I eat you out with a Diva Cup in?' I was just like, 'HELL YEAH.'"

I remember how surprised I was when Skylar expressed interest in having sex with me while on my period. Of course, there's nothing gross about my blood or my period, but I too was used to people reacting negatively to my monthly cycle. Skylar's positive take helped redefine what my period meant in an intimate context, and has since allowed me continue to feel desirable in any state. Kurt did the same for McNally.

"It was really gratifying to see that my boyfriend didn't think I was disgusting," she tells me. "I normally feel really crappy on my period, so just knowing that he still thought I was sexy was very empowering."

We undoubtedly deserve to feel sexy and empowered in every context, especially concerning our romantic and sexual partners. Keeping the lessons in mind that I've learned from having such a body positive partner (specifically concerning my body functions), it's difficult to imagine ever settling for anything less. My friend Belle Glass agrees, since her current relationship with partner Jairo is filled with fart competitions and poop pep talks. Heart eyes.

"I dated a person who would constantly joke that 'moms/girlfriends/sisters/women don't fart," she tells me in an email. "You can imagine how frustrating that can be. I had a lot of pent up gas."

With Jairo, things are luckily very different. "Being with someone who understands that these sorts of things are natural and well, human, is so refreshing," Glass adds. "He is my best friend, and a person who accepts everything about you — even the things society says are not so great — is the right kind of partner to have."

From my experiences, this is certainly very true. If your partner doesn't have your back, or thinks that your natural bodily functions are repulsive and should be suppressed, then how far can that relationship really go? As someone who has struggled with a myriad of body image issues including the intersection of my gender identity with my disabilities and history of trauma, the reality is that if my partner isn't down to worship my whole body, I simply can't be my true glittering body positive self around them.

Personally, I need whoever I'm sharing my body and life with to be the antithesis of "grossed out" when it comes to the things my body does, and the way my body looks when doing them. As Southard Ospina tells me, "To live life in constant fear of letting your body do its thing is kind of a sad existence. Our bodies are rad, wacky, gross things — and they allow us to do a lot of amazing stuff. A little fart isn't going to change that."

This is why I'm endlessly grateful to be with my current partner: The person who licks my sweaty armpits, who attempts to push out my farts by pressing on my belly, and who will never shy away from a little period sex.

More like this
The Best Time To Date After A Breakup, According To Experts
By Bustle Editors
Most Comfortable Underwear For Big Butts
By Audrey Williams
Are Virgo & Capricorn Compatible In A Relationship?
By Kristine Fellizar
20 Things You Should Never Tolerate In A Relationship
By Rachel Sanoff and Kathleen Ferraro
Get Even More From Bustle — Sign Up For The Newsletter