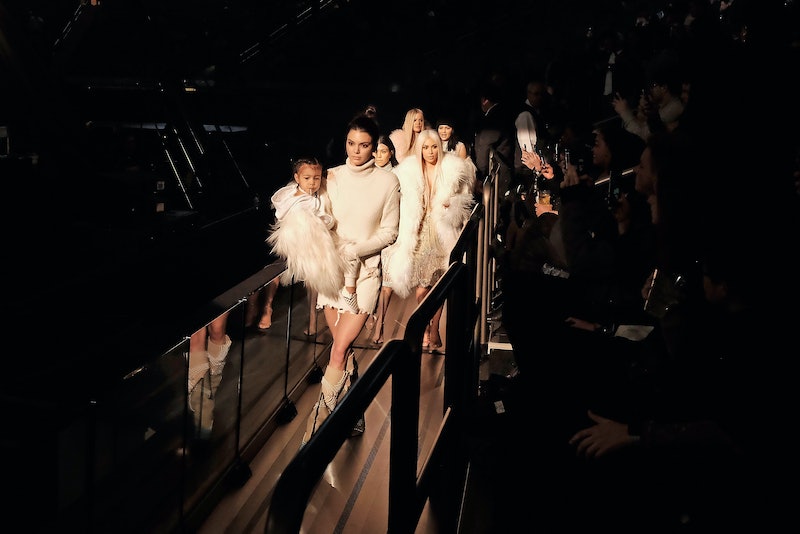 There is something changing in the Kardashian-West household. Now that the whole brood has successfully moved out of momma Kris Jenner's house, the times they are a-changin'. This year, the all the Kardashian sisters finally joined Snapchat, and all of them are finally catching up to Kylie Jenner's Snapchat popularity. When Kim Kardashian first joined and debuted cutie North West on the app, the 2-year-old was noticeably scared of the filters, but she is afraid no more! Kardashian has declared that North is now a fan of Snapchat, and her cutest snaps are already proving that she's well on her way to continuing the family legacy of ruling the app and always being ready for the camera.

Two months ago, Kardashian posted a video of a distraught North, who did not understand the filters quite yet. I totally understand, because sometimes that fang-faced, screaming creature filter pops up out of nowhere and it ruins my entire night. While the tot would naturally be afraid of those spooky filters, North got a bit more curious with the flower crown and makeup filters, which is totally adorable.

North is just a curious little girl having fun on the app, and in the short time since her debut, she's already my favorite Snapchat star. Here's some of her cutest moments.

1. When She Tried On The Bejeweled Eye Makeup

I think this filter could convert anyone.

2. When She Said Hi But Didn't Quite Understand It

She's so adorable in her confusion.

3. When She Was Working The Star Crown

Here she is slowly coming to terms with this whole filter thing, and I think she likes it.

4. When She Made The Pig Filter Look Cute

Not many can pull that one off, but North killed it.

5. WHEN THIS WAS THE CUTEST THING ON EARTH

Why do I suddenly want children? Help!

6. When She Was Feeling Her Makeup

I have a feeling Kylie will have some competition in the makeup game in a few years...

7. When She Knew To Rock The Most Popular Filter

8. When She Handled A Face Swap Like A Pro

Just still chewing during the snap like it's nothing.

Ugh, she's so cute and so happy with her flower crown. I can't take it.

It's only been two months since she's been trying on Snapchat filters, but North is coming for the family crown real fast!