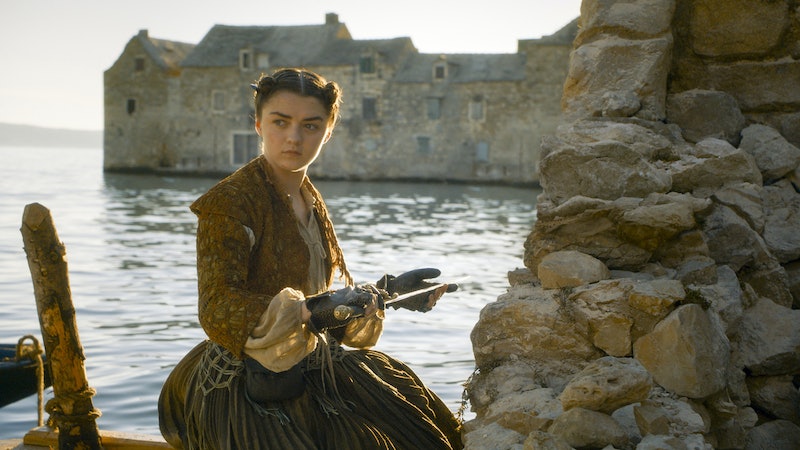 Why be no one when you can be Arya Mother Freakin’ Stark? It seems Arya herself came to that same conclusion on HBO’s Game Of Thrones. Though it was awesome to see Arya follow her own moral path, regain her independence, and reunite with Needle, her decision to defect from The House of Black and White is likely a dangerous one. Many fans are concerned that it may be her last decision, and there are theories that Arya Stark will die on Game Of Thrones.

On a series where no character is safe and fans are navigating uncharted territory, as the show has burned through almost all of the A Song Of Ice And Fire book series’ material, viewers are beginning to squirm as danger surrounds their favorite, remaining characters. With Jaqen H'ghar and The Waif — you know, the magical assassins — unhappy with Arya and planning to go after her in the latest episode, many fans are concerned Arya will die at the hands of the Faceless Man, and woman. But, I don’t think Arya is going to go down that easy — in fact, most evidence suggests that Arya has something prophetic to carry out. After all, what is the one thing Arya Stark says to death? Not today.

So, with this foreshadowing in mind and considering Arya’s current escape from The House of Black and White, it seems her business with the Faceless Man and The Waif is far from over, but it doesn’t mean Arya will die. Here are all of the theories about Arya’s future on Game Of Thrones.

Arya Will Kill The Waif

Arya and The Waif will face off, so to speak. According to WinterIsComing.net, fans took photos of the two characters sparring on set. And, it appears to be a yet-to-be-aired scene as Arya has her vision and was suspended in air during filming. The one concerning thing about these images from set is that The Waif is holding a bloody knife...

The Waif Is Connected To Jon Snow… And Maybe Arya Is Involved?

According to Tech Insider, a few years ago Redditor that_man_salz suggested that Arya’s training with the Faceless Man could lead her to have to assassinate one of her siblings, maybe even Jon Snow? The Tech Insider author Kim Renfro posited an attack on Jon Snow by the Faceless Man holds water, considering a recent interview with the woman who plays The Waif, Faye Marsay. The actor said she knew of Jon Snow’s resurrection — while many actors did not, including Sophie Turner who plays Sansa — but she coyly said she could not say how she knew this. As of right now, The Waif and Jon Snow are at other ends of the country, but the characters do have someone in common: Arya. Will Jon Snow and Arya connect and be confronted by The Waif? Will Jon Snow alone interact with The Waif? Or will Arya rejoin the House of Black and White and face her brother? There are a lot of possibilities here.

There are a couple of different ways this theory could work, and yes this would mean Arya eventually dies. But won’t they all eventually die? For those of you who may not remember, Nissa Nissa was the wife of hero Azor Ahai, and she was sacrificed by her husband so he could create his powerful sword. Many believe Jon Snow to be Azor Ahai, so Arya could be Nissa Nissa to Jon Snow, because their love is just as deep, but platonic. I don’t want to call it brother/sister love because Jon Snow’s parentage is TBD. Some people also think she could also be Nissa Nissa to Gendry Baratheon, because like Azor Ahai, Gendry is a blacksmith. On a more optimistic note, whatever did happen to Gendry? Perhaps he and Arya do have a future together? Maybe even a happier one?

A couple of years ago Maisie Williams was discussing how the show is catching up with the book, she took the opportunity for mystery to scare fans. She was quoted in The Guardian as saying, “We're coming to the end now, so I don't know what they're going to do next year … It's the end of Arya, as far as anyone knows.” This isn’t the first time Williams has given us a heart attack or hasn’t sugarcoated it for fans. She unapologetically told us Jon Snow was dead and posted this video after the Red Wedding. We can count on Williams to keep up the suspense — and raise our blood pressure.

Arya’s Got People To Kill!

Hello, girl has a list. And, it would be downright anti-climatic if this plot didn’t go anywhere. Some people think Arya is going to take out someone big on her list, like Cersei or Walder Frey next.

So, again, what does Arya say to death? Not this season.