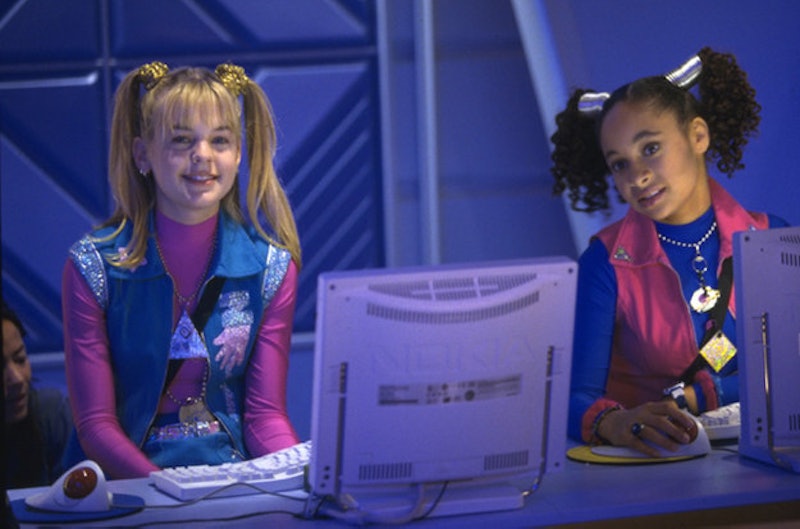 If you were a Disney Channel kid like I was, then odds are you secretly wanted to be Zenon at some point over the course of your childhood. She lived in space, was super cool (for 1999's standards), and her parents were scientists whose worst punishment for Zenon was sending her back to Earth... Seriously. However, despite growing older, and (arguably) wiser, going back and watching Zenon: Girl of the 21st Century still makes me excited. Because now I can watch Zenon: Girl Of The 21st Century in the present day with a whole new perspective.

In the DCOM, living in space means never getting sick, not having to worry about dressing for the weather, and living an all-around better, more peaceful, technology-filled lifestyle than the ones we live today. Therefore, re-watching the movie comes with its own fair share of jealousy. I mean, not only is this because we still don't live like that today, but because, as an adult, it's easier to realize that Zenon's problems are nothing compared to what we mere modern humans have to put up with on a daily basis. However, despite that, the movie is still hilarious — and brings on some adult revelations that I never would have picked up on as a kid. Here are just some of things I noticed while re-watching Zenon: Girl of the 21st Century.

1. They Have iPads And Video Chat

Since the movie was made in the late-'90s, obviously the technology looks older than it is today. However, they do use items that look very similar to the iPads and video chat options we have today. Disney Channel just knew what was coming.

2. Their Space Lingo Is Still Amazing

Zetus lapetus. My childhood self believed that everything they said in this movie was completely absurd. But, today, when sayings like FOMO and bae are common, I actually wish that we were fortunate enough to use the really cool space language Zenon used. Seriously, when are these words going to catch on?

3. The CGI Was Actually Pretty Bad

Zenon: Girl Of The 21st Century was a Disney Channel movie, so I don't exactly expect the special effects to be up-to-par with the theatrically-released major motion pictures of the times. But the space ships and automatic doors that I thought were so cool during my childhood viewings fail to amuse me this time around.

4. The Fashion Never Advanced Past The '90s

Hair scrunchies. Jean vests. Lots of pink and blue. Zenon and her friends' style may have been considered futuristic for 1999 Disney Channel, but unfortunately (or fortunately?) I don't these are going to be the trends to stick around once humans live in space.

5. They Referred To There Being Another Clinton In Office

Did Zenon predict the future? Not exactly. In the very beginning of the film, Zenon's teacher actually refers to a future female President Clinton. However, instead of Hillary (who is currently running for office) , the movie refers to Bill Clinton's daughter, Chelsea Clinton, as being the one holding down the position. Close but no cigar.

Not only is Zenon's teacher teaching the class via hologram, but holograms are regular occurrences everywhere. When are we going to have regular holograms already?

7. Her Boy Band Crushes Were On Point

No matter how much time passes or how much technology advances, I'm starting to think that there will always be boy bands and fangirls. Zenon and her friend freaking out over Microbe and their lead singer, Protozoa, totally makes sense. They're cute, their song "Supernova Girl" is still catchy, and they're like *NSYNC in space.

8. Raven Made The Perfect Best Friend

Between her snark, ability to keep Zenon in check, adventurous spirit, and fashion sense, Raven was never not cool when it came to her roles on the Disney Channel. Playing Zenon's BFF, Nebula, she was just as lovable as she's always been.

In Zenon's world, not everyone is privileged enough to live in space. So, when Zenon complains about wanting to space-walk on her own at the age of 13 and bashes life on Earth, it's hard to not cringe. Her snarky attitude has no filter.

10. Bullying Is Worse Than Ever In The Future

While everything in space may seem great, the teens on Earth do not hold back with their judgements. In fact, everyone is more judgmental given the variety of different lifestyles that now exist. This is probably one of the things that makes me happy I'm actually not Zenon.

11. Her Aunt Judy Is #AuntGoals

Between her cheesy jokes, her unhealthy diet, and the fact that she's always there for Zenon, Aunt Judy is the best. Even though they don't necessarily see eye-to-eye when it comes to their living preferences, I don't understand why Zenon wouldn't want to stay with her.

12. Zenon's Got Some Serious Game

She was on Earth for five days, and she already got a guy. In fact, she was pretty upfront with her guy, too, with quotes like, "If you want to kiss me just do it!" and "Dare to try again?" If only we all could go to space and then come back to Earth as the cool space girl.

I know I said this a million times, but I'm pretty sure that we're getting closer to living in space now than we were when I watched this as a kid. And, while living in space may be dangerous and scary, I still want to go. I really hope the whole experience is as cheesy as Disney Channel made it sound.

So, excuse me while I move on to the sequel, because this has to be some of Disney Channel's greatest work.