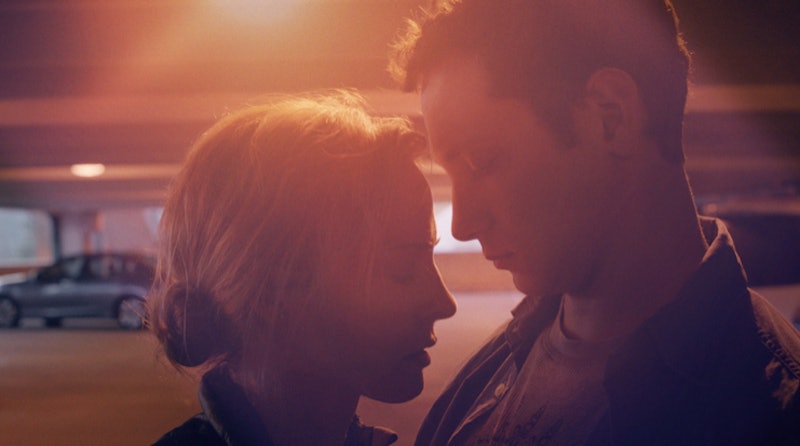 When Asher Millstone is done learning How To Get Away With Murder on the hit ABC series, the actor behind the character, Matt McGorry, is busy falling in love. Or at least that's what he's up to next in the film festival-run and upcoming feature film, How He Fell In Love , from Harvest director Marc Meyers. The film, which stars the breakout Orange is the New Black star and Homeland's Amy Hargreaves, follows the story of, "A casual affair between a young musician and a married woman turns into an intimate and profound connection that threatens to derail their lives." And now, the exclusive look at How He Fell In Love's official movie poster makes it clear that I'm already going to need some tissues watching this one.

However, there's a clear difference between this unrequited love story and the one of Romeo and Juliet. According to director Marc Meyers, the ways in which love can break past boundaries is being explored through a more complicated, adult-based perspective.

"I wanted to explore how two people can become genuinely and intensely connected to one another, even when timing and boundaries don’t work in their favor. With that, I didn’t want to place judgment that their love is forbidden. I believe these two characters, Travis and Ellen, could potentially help make the other a better person. It was also through this lens that I could look at marriage under pressure, revealing both the gems and heartaches in Ellen and Henry’s own relationship."

Just look at this poster for yourself to immediately bring on those heartache feels.

The film also stars Skins' Britne Oldford and Mozart In The Jungle's Mark Blum and has screened as an official selection of the Cleveland International Film Festival, the 2015 Los Angeles Film Festival, and the Woodstock Film Festival. Obviously, McGorry and Hargreaves are ready to let nothing come between their love story and the film's official wide release.

How He Fell In Love will be premiering in Los Angeles on July 8 and in New York on July 15 before it is released nationwide. Check out the film's official website, here.

More like this
'That '90s Show' Star Callie Haverda Got Advice From Mila Kunis & Ashton Kutcher
By Brad Witter
Vanessa Hudgens Is Reportedly Engaged To Cole Tucker
By Jake Viswanath
Alicia Silverstone Revives Her 'Clueless' Character In This Super Bowl Commercial
By Jake Viswanath
How Andrea Riseborough Got Nominated — & Almost Disqualified For An Oscar
By Jake Viswanath
Get Even More From Bustle — Sign Up For The Newsletter
From hair trends to relationship advice, our daily newsletter has everything you need to sound like a person who’s on TikTok, even if you aren’t.