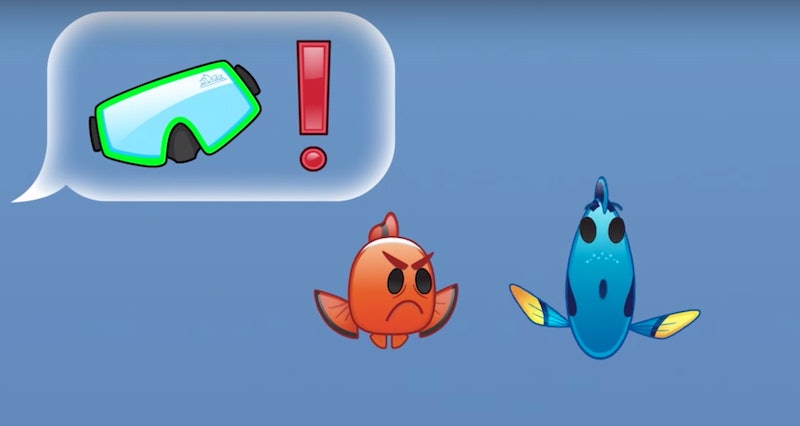 If you are a little rusty (or should I say Dory?) on what happened in 2003 Pixar flick Finding Nemo, but you aren't sure you will get around to revisiting the movie before sequel Finding Dory cannonballs into a movie house near you on June 17, do not worry. The folks at Disney have you covered. On Monday, Disney’s YouTube channel shared a painfully adorable emoji-fied recap of Finding Nemo (h/t Entertainment Weekly). In under three minutes, the newest Disney As Told By Emoji clip retells the story of Marlin the clownfish's search for his son, Nemo. Now, the video does not utilize the standard emoji set; the renderings featured in “Finding Nemo As Told By Emoji” are original illustrations. Stupid-cute original illustrations. Stupid-cute original illustrations that I would like to add to my cellular device right this second.

OK. Are you ready for a heaping spoonful of bad news? Are you sure? Don't say I didn't warn you: The Finding Nemo emoji aren’t in the App Store. I know, right? I am so bummed that this Finding Nemoji set is not something I can actually download onto my phone. And yes, I definitely checked. And yes, I was beyond ready to spend multiple dollars on a Finding Nemoji app.

Until my phone has a Dory in a detective’s cap emoji, a Bruce the great white shark emoji, and the school of fish emoji, my phone will be incomplete.