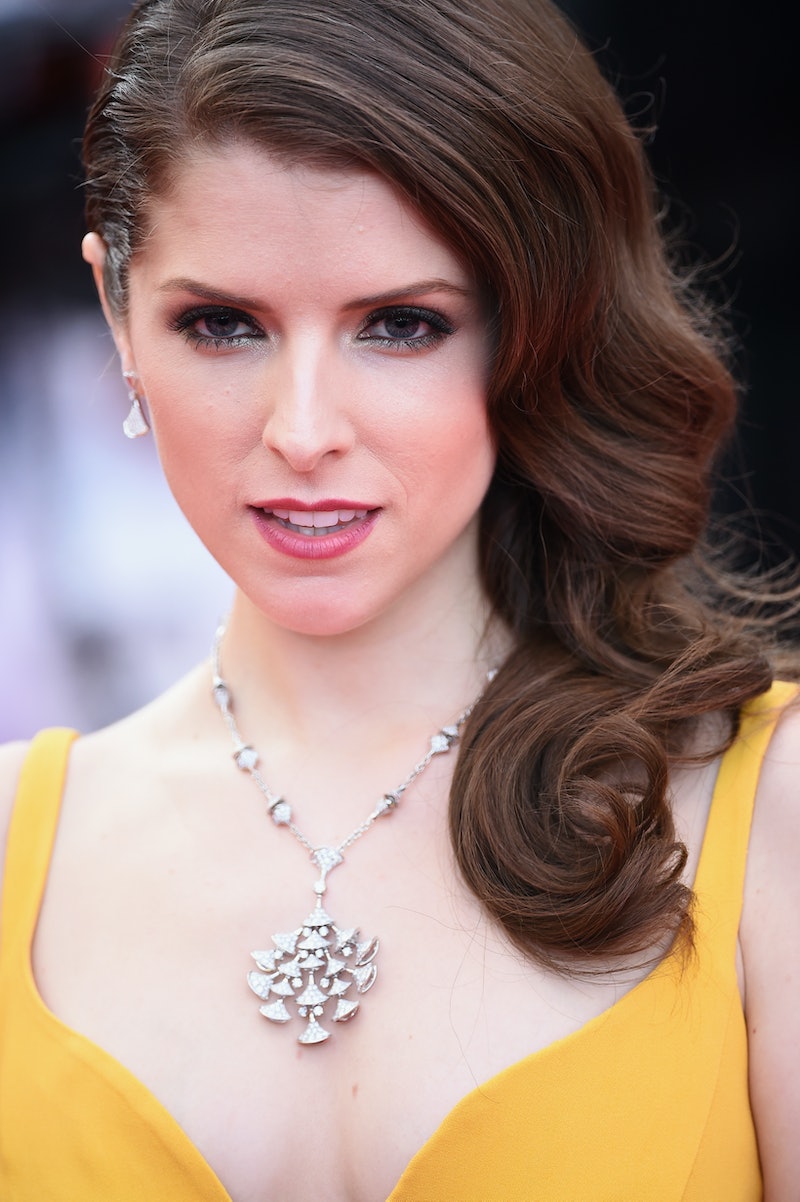 Sexism in Hollywood is sadly still the norm these days, but there is definitely one major step in the right direction happening among female celebrities: They're speaking out about the sexist treatment they've faced, which only serves to shed light on what's existed in the entertainment industry as long as there has been an entertainment industry to speak of. If there is ever to be positive change among the film and TV industries, speaking out about their experiences is the best thing that female celebrities can do, since exposing the harsh reality of sexism is the only way to ensure it doesn't happen in the future. These ladies have taken brave steps to admit when they've been treated unfairly, and it's inspiring.

Of course, the stark reality is that sexism exists in every industry, not just in Hollywood, but by these celebrities speaking out about the sexism they've experienced, therein lies a glimmer of hope that positive change can exist for all women, celebrities and non-celebrities alike. These women should certainly be applauded for igniting conversation about sexism and expressing their desire for change — and it's my sincere hope that positive change will happen soon, thanks to these celebrities and their openness.

It’s infuriated me when I have had conversations with male directors — and I would never in a million years name names — but I’ve questioned an edit, and I’ve been told, "Well you just don’t like her." And I’m like, "Well you just don’t like people a lot, and if you don’t show their flaws, you don’t show them as real human beings, so stop trying to cut out the ugly bits."

When the director says you really need to be topless in this scene, I go, "Do I?" You have to fight back and claim the right to develop the character. Women need to empower themselves and claim even a character that’s written in a clichéd way. You don’t have to play it that way.

After receiving backlash from movie critic Rex Reed in 2013 due to her weight in a film, McCarthy explained to Entertainment Weekly in 2015 that the same critic later approached her to praise her for a different movie role, and she told the magazine she asked him, "Are you the one who wrote I was only a good actor when I looked more attractive and that my husband should never be allowed to direct me because he allowed me to look so homely?"

He admitted he was. "Would you say that to any guy?" she continued. "When John C. Reilly — or any actor — is playing a character that is depressed and dejected, would you say, ‘Well, you look terrible!’?" She asked the critic if he had a daughter. He did. "Watch what you say to her," she told him. "Do you tell her she’s only worthwhile or valid when she’s pretty?"

At a 2014 Elle Women in Hollywood event, Garner addressed the blatant sexism that both she and then-husband Ben Affleck faced when doing press junkets for their films. In a speech at the event, which honored Garner, she said,

For example, my husband and I do kind of the same job, a little bit. Not long ago we both had one of those magical days, we call it a junket, where we both attended these lovely events where people come in every four minutes, they ask the same questions over and over again, you know the drill. We got home at night and we compared notes. And I told him every single person who interviewed me, I mean every single one, and this is true of the red carpet here tonight Elle, asked me, "How do you balance work and family?" and he said the only thing that people asked him repeatedly was about the tits on the "Blurred Lines" girl.

In 2016, the actor told British GQ of being paid less than her male co-stars for American Hustle:

The truth is we hire people to negotiate on our behalf, men and women... I knew I was being paid less and I still agreed to do it because the option comes down to do it or don’t do it. So you just have to decide if it’s worth it for you. It doesn’t mean I liked it.

The actor and advocate for gender equality told The Guardian in 2015, "I have experienced sexism in that I have been directed by male directors 17 times and only twice by women. Of the producers I’ve worked with 13 have been male and only one has been a woman."

Having starred in the feminist cult classic Thelma & Louise back in 1991, Davis told The Guardian that she "became hyper-aware of how women are represented in Hollywood," and said she hadn't experienced sexism on a level as bad as some of her peers, except for one instance that sticks out in her mind. According to Davis, a director once said he enjoyed hugging her every morning, saying, "It’s the only chance I get to feel you up."

Davis replied, "'OK, that made me uncomfortable'… And he would not stop defending himself, saying: 'But I am a feminist, I am such a feminist, and you know that.' I said: 'Nevertheless, I didn’t like it, that’s all. Just deal with it.'"

Arquette has put herself in the front of the line to fight against sexism and the wage gap in Hollywood, and in 2015, she told Fortune about an experience she once had with a director: "I remember a director telling my agent that it would be great if I could lose 10 pounds as long as my boobs didn’t get smaller. I didn’t want to lose 10 pounds and I didn’t."

Ferrera told The New York Times in 2016 of sexism she faced early in her career:

I had just won [a top award at Sundance], and [my manager] wanted me to audition for the Latina chubby girl in a pilot. She wasn’t even the lead; she was just the sidekick, with the same joke in every scene. I said, "I’m not going in for that." When I ultimately left him, he [told] another of my reps, "Somebody should tell that girl that she has an unrealistic idea of what she can accomplish in this industry." That was someone I was paying to represent me.

At Variety's Cannes Film Festival panel in 2016, Sevigny revealed she's had some sexist experiences on set. She said, "I've had the ‘what are you doing after this?' conversation. I've also had the ‘do you want to go shopping and try on some clothes and, like, I can buy you something in the dressing room' conversation. Just like crossing the line weirdness." In another instance, a director told her, "You should show your body off more. You shouldn't wait until you're as old as this certain actress who had just been naked in a film, you should be naked on screen now."

In 2015, Saldana told an interviewer she was once hired for the way she "held a gun while wearing panties." She told Philly.com, "That story is true. A producer once told me he hired me for the way I held a gun while wearing panties, not for my opinions. I wish I'd recorded it, so I could play it for every girl in elementary school and tell them never to let anybody treat them that way."

McGowan made headlines in 2015 by sharing a casting note about showing off cleavage to Twitter, and she explained to Entertainment Weekly that this wasn't the only sexism she'd faced in her career. She said, "When I did my first film, I was told by my agent that I would need to have long hair so men in this town would want to f*ck me and hire me. That was said to a 17-year-old."

Hot on the heels of her success in Pitch Perfect and its sequel, Kendrick revealed to Glamour in 2015 that she still faced plenty of sexism when going for roles. She said,

There's [a film I'm considering] now where I have to wait for all the male roles to be cast before I can even become a part of the conversation. Part of me gets that. [But] part of me is like, "What the f*ck? You have to cast for females based on who's cast as males?" To me, the only explanation is that there are so many f*cking talented girls, and from a business standpoint it's easier to find women to match the men. I totally stand by the belief that there are 10 unbelievably talented women for every role.

Poehler revealed to Fast Company in 2015 that sexism happens on the production end as well. She said,

I have these meetings with really powerful men and they ask me all the time, "Where are your kids? Are your kids here?" It's such a weird question. Never in a million years do I ask guys where their kids are. It would be comparable to me going to a guy, "Do you feel like you see your kids enough?"

Back in 2000, Janney recalled to People a harrowing moment she had early in her career in regards to her height:

Years ago, one casting agent told me that the only roles I could play were lesbians and aliens. When I said that Sigourney Weaver was tall, [the agent] replied, "Well, she is drop-dead gorgeous." I could feel the tears brimming in my eyes.

In 2015, Mara told The Guardian that she has been called "horrible things" in her line of work. She said,

To me, the thing that’s more unfair than the pay is the terminology that’s used to describe actresses who have a point of view, and want to have a voice in their life and their career, and what they choose to do. I’ve been called horrible things. If a man was acting in the same way that I was acting, it would just be considered normal. To me, that’s the thing I find so frustrating is calling women spoiled brats and b*tches. We just want to have a voice in our life, and I don’t think that’s anything that shouldn’t be encouraged in any human.

After her 2016 Oscar win for Best Actress, Larson told reporters backstage, according to The Guardian:

There were many times that I would go into auditions and casting directors would say: "It’s really great, really love what you’re doing, but we’d love for you to come back in a jean miniskirt and high heels." Those were always moments of a real fork in the road, because there’s no reason for me to show up in a jean miniskirt and heels other than the fact that you want to create some fantasy, and you want to have this moment that you can reject. I personally always rejected that moment. They were asking me to be sexy, but a jean miniskirt and heels does not make me feel sexy. It makes me feel uncomfortable. Every time I was put in front of an opportunity where I had to decide in those moments, do I or do I not wear a jean miniskirt? They became huge moments for me of confidence.

These celebrities are doing exactly what needs to be done in order to break the mold of sexism in Hollywood, and they should certainly be applauded for speaking out about their experiences, no matter what backlash may come of it. Bravo, ladies.