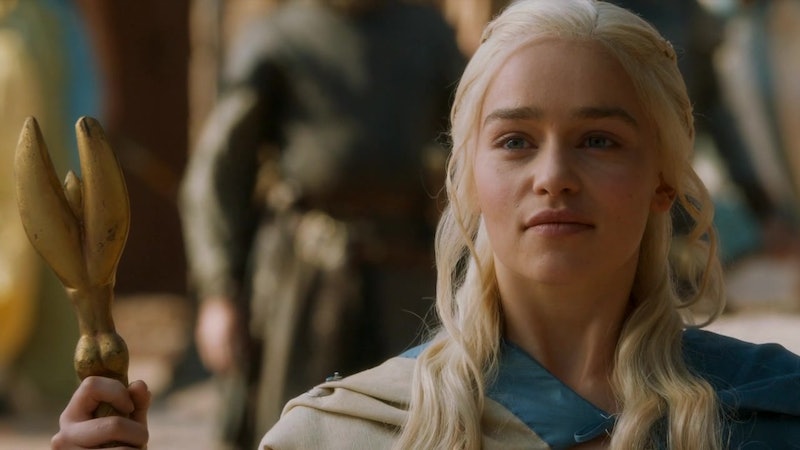 If you'd thought that acting on Game of Thrones would be as harrowing and psychologically troubling an experience as watching the show (just me?), you'd be wrong. The gods don't just smile on Westeros, they laugh along with the jokes played there, as this Entertainment Weekly summary of Game of Thrones' practical jokes proves. While you'd imagine with insane shooting schedules, there might not be time for things like this, worry not — there certainly seems enough time for that most essential of work pastimes, aka, messing around with your colleagues.

Apparently, John Bradley (Samwell Tarley), Kit Harington (Jon Snow), Rose Leslie (Ygritte), and Alfie Allen (Theon Greyjoy) have all been the victims of some elaborate on-set practical jokes involving fake recitals, Tudor-style costumes, and actors' characters even being killed off (too far, you guys: anything can and does happen in Westeros). But the GoT cast and crew's pranking talents aren't limited to each other: over the years we've also seen the actors play some of their juiciest jokes on the unsuspecting public.

But when it comes to the jokes of Game of Thrones, only one can take the iron throne. Only one can rule them all, control the dragons, command the populus, beat off the Wildlings. Whose joke is a kingslayer and whose is a, well, Theon Greyjoy after meeting Ramsay? Let the ranking commence.

12. Lena Headey Posts A Stone Heart On Instagram To Mess With Your Head

Since Catelyn Stark was known as "Lady Stoneheart" in the books, the whole Internet went — and is still going, check out recent comments on the Insta — nuts over this, even though Headey later 'fessed up that it had zero relevance to Game of Thrones. She explained “No, that was me drunk in Palm Springs going, ‘This is so pretty.’"

Verdict: Since Headey is playing innocent on this one and won't even come clean that it was a prank, I'm so not impressed. Keep trying, Ms. Headey.

11. Maisie Williams Pretends To Be A Shop Assistant Called Lorraine

Williams had to pretend to be a shop assistant at a shop that was doing a Game of Thrones giveaway and every time someone said "You're Arya!" pretended she had no idea what they were talking about and had never seen the show. Droll.

Verdict: It's a smart prank except for one key detail that nobody seemed to have factor in: Williams struggles to maintain an American accent and keeps slipping back into British English... as a result, the customers look more in on the joke than they do fooled by it. Fun idea, but no cigar.

So, apparently actress Rose Leslie hates singing in public. According to Entertainment Weekly , in the book version of Game of Thrones, Ygritte sings a song that includes the not-unembarrassing line “Oooooooh, I am the last of the giants, so learn well the words of my song, or when I am gone the singing will fade, and the silence shall last long and long.” The showrunners obviously decided to capitalize on this opportunity for leg-pulling by incorporating the song into a script and sending to Leslie.

Verdict: I mean, mildly amusing, but I'm not in stitches. You've got the faintest shadow of a smile etched into my face, but not much more. I know you can do better, GoTers. I believe in you.

In a fake script the showrunners mocked up, Snow gets disfigured after he sets fire to a wight. Entertainment Weekly reports the script as reading as follows: “Jon plunges his hand into the fire, seizes the burning drapes, and FLINGS them at the dead man, engulfing them both in flames… When the fire is finally out, we see by torchlight that all of Jon’s hair has burnt down to the scalp. The skin on the top half of his face has been melted in the extreme heat, blistered and pustulant. Despite what must be the extreme agony of permanent disfigurement, Jon stands stoically by his master’s side.”

Verdict: Harington's good looks are the show's most important natural resource, like diamonds or oil. The contours of his cheekbones provide some much-needed aesthetic relief between all the severed penises and stabbing. Nope. Can't laugh at this. Not even a little bit. But I can see that this is a more ambitious attempt at a joke than the song one above, thus the six ranking.

No sleeping around the Queen of the Dragons! As the video above depicts, when Clarke's co-star Joseph Naufahu went for some shuteye, Clarke tried to dribble caramel onto his hands and then eventually slot the spoon into his mouth — but he woke up just in time.

Verdict: Strong first effort, Clarke. I salute you. But a bit less giggling and a bit more pranking would be appreciated in future.

7. The Crew Put A White Walker In A Flat In Spain For A Fake Spoiler

Why should non-Game of Thrones workers not have the pleasure of being pranked? Well, exactly. Per this tweet, us normals got pranked when presumably out of frustration out of trying to guard a set in Girona (and subsequent spoilers leaking) from nosy fans, the crew posted the best fake spoiler: a White Walker in a flat. Can you imagine? Game of Thrones the spin-off: White Walker Friends. Just a bunch of 20-something White Walkers, cohabiting across three apartments in the same building, sharing love, laughs and a serious coffee addiction with their friends. Down.

Verdict: Yessss. It's funny because it's feeding into what we're all craving: more information about future episodes.

6. Nikolaj Coster-Waldau Holds Up A Duck, Says "Think About It," Internet Goes Nuts

Coster-Waldau identified one key truth about the GoT fanbase: that sector who have already read the books are so smug about it. So smug that they're easily duped by a play to their superiority over other fans, making them the perfect victims for a low-effort practical joke. After holding a duck up and saying "This is just a little spoiler for the book readers. This duck: think about it." The well-read fans certainly did: check out their speculations in the comment section of this article.

Verdict: So evil. So Jaime. I love this!

How do I love thee, Peter Dinklage? Let me count the ways. You're the heart of Game of Thrones and the funniest scenes are always yours, so of course your prank is up here. Dancing your entrance and annoying the crew? Why not.

Verdict: OK, so it was seriously low-key and required zero prep. But it annoyed everyone, which, at least to me, is always the badge of a high-quality practical joke.

According to Entertainment Weekly, basically, the showrunners convinced Alfie Allen that his character was killed off by Bran Stark at the end of Season 2 when Theon Greyjoy loses control of Winterfell. The joke was on the showrunners though, 'cause Allen thought it was a cool twist and went off on holiday instead of arguing his character's fake death.

Verdict: Impressed by the showrunners' commitment to taking the mickey. Writing an entire alternate ending involving multiple characters is a cut above your average practical joke.

3. Khal Drogo Wears A Pink Fluffy Sock Over His Love Sword During A Sex Scene

Jason Momoa didn't look like a laugh-a-minute in his bleak incarnation as Khal Drogo, but apparently he's hilarious, because this happened, according to Emilia Clarke during an appearance on The Graham Norton Show: "There was the lovely, uh, the lovely rape scene... so obviously, there's nudity and you kind of have to try to lighten the mood," said Clarke. "So he decided to not use a modesty sock but use a beautiful pink, fluffy sock. So getting that close-up from me looking petrified, just like 'I didn't want it to happen' [drew] lots of laughter — 'it's huge and it's big and i don't know what to do!'"

Verdict: Brilliant. Momoa, perhaps if it hadn't been for your early on-screen demise, you would have taken the pranking throne.

According to Entertainment Weekly, inspired by the hardship of basically wearing nothing but a burlap sack for years, Hannah Murray (Gilly) teamed up with Kit Harington to persuade producers to play a prank on John Bradley: he would be given a new costume and it would look absolutely ridiculous. Think: Tudor style but multiplied by 10, with a codpiece and a puffy hat. Bradley told EW “I looked so bad and ridiculous, it was unbelievable... the reason I bought it is because we’d never seen Sam at home before, and [his parents think] he’s an idiot. [Maybe] Sam dressed like an idiot before he came to Castle Black.”

Verdict: priceless. The hangdog look on Bradley's face while attired in his new garb is worth the effort and expense of piecing together ten fake costumes.

1. Jaime Lannister Gets A Buzzcut

Every bit as tricksy as his character is actor Nikolaj Coster Waldau. According to Entertainment Weekly, when he discovered the producers had a haircut planned for his character, he sent them an angry email about how upset he was that they were changing Jaime's hairstyle without requisite thought for how this would impact his character... followed by a photo of him with a shaved head. Only when the assorted producers got anxious about scheduled reshoots where hairstyles wouldn't match did Coster-Waldau come clean — it was an old photo.

Verdict: Nikolaj, this is it: The practical joke to unite the kingdoms. It's deliciously simple and yet throws the whole Game of Thrones operation into chaos. Truly, I bow to you.

It's a relief to discover that our favorite Game of Thrones actors and producers are leading such fulfilling, joke-filled on-set existences. Now they just need to add footage of the jokes into the ad breaks to give us all a breather from the deadly seriousness and dicing with mortality of Game of Thrones.