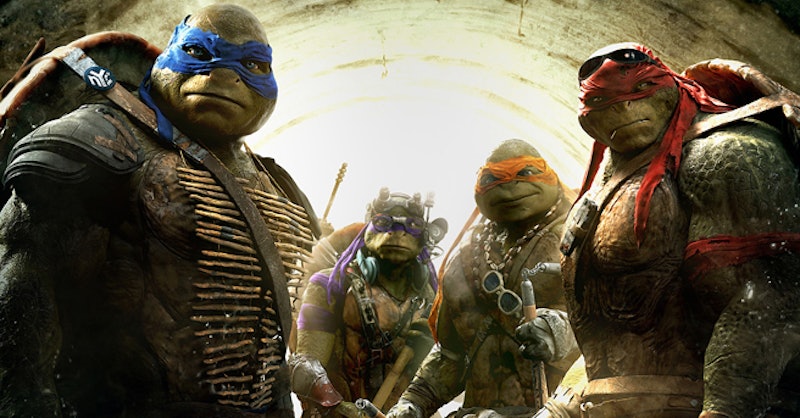 Is a reboot even a reboot if it doesn't cross the trilogy threshold? X-Men: Apocalypse rounded the X-Men revival out to three this summer. Star Trek Beyond will do the same for that franchise. Teenage Mutant Ninja Turtles: Out Of The Shadows brings the TMNT count up to two. Is there enough gas in that tank (or ooze in that sewer, as if were) for a third? TMNT 2 arrives in theaters on June 3, and another sequel might not be far behind. TMNT 3 could happen, so don't put those pose-able action figures away just yet.

Of course, a feature trilogy based on the amphibious comic book characters Leonardo, Michelangelo, Donatello, and Raphael is already in the books. A concept like the Teenage Mutant Ninja Turtles, with their rat mentor and their Renaissance artist namesakes, could only have originated in the '80s. An animated series capitalized on the popularity of the comics books in the late '80s, along with a line of toys. In 1990, the Turtles starred in their first live-action movie, Teenage Mutant Ninja Turtles. That film gave the boys their origin story and teamed them up with intrepid reporter April O'Neil and vigilante Casey Jones against the nefarious Foot Clan. A sequel, The Secret Of The Ooze, followed in 1991, introducing Rock Steady and Bebop work-arounds Rahzar and Tokka and gifting the world with the Vanilla Ice soundtrack single, "Ninja Rap." Teenage Mutant Ninja Turtles III came out in 1993 and took the Turtles back in time to feudal Japan. While more incarnations of the characters came and went in comics, video games, and television in the meantime, the Teenage Mutant Ninja Turtles didn't return to the screen until the animated standalone TMNT in 2007.

The Teenage Mutant Ninja Turtles are such a product of their time, and are basically nonsensical on top if that. (If they grew up in the NYC sewers, why do they speak in west coast surfer parlance?) Yet those characters have yet to die. Michael Bay picked up the property and produced the combination live-action and motion-capture animation reboot in 2014, casting his Transformers leading lady Megan Fox as April. Teenage Mutant Ninja Turtles picked up over $65 million in box office receipts its opening weekend. Before that first weekend was out, Paramount had already announced via The Hollywood Reporter that a sequel was in development.

It sounds like the studio was ready to push the button on this sequel the moment the fan response became apparent. Though the first Turtles movie in this trilogy wasn't well-reviewed, it earned back its budget and then some. History could repeat itself and news of a third film might become public this weekend.

Megan Fox's schedule could be a deciding factor here. The actress just announced that she's pregnant with her third child. She's the most recognizable name in the series. Besides co-star Will Arnett and new addition Stephen Amell as Casey Jones, the star power of TMNT are Fox and the characters themselves. I doubt Bay would put a third film in production without Fox's commitment, unless he has a recast up his sleeve.

Are audiences and critics clamoring for another Teenage Mutant Ninja Turtles? Not exactly. But another sequel could project respectable enough numbers to complete the possible trilogy.