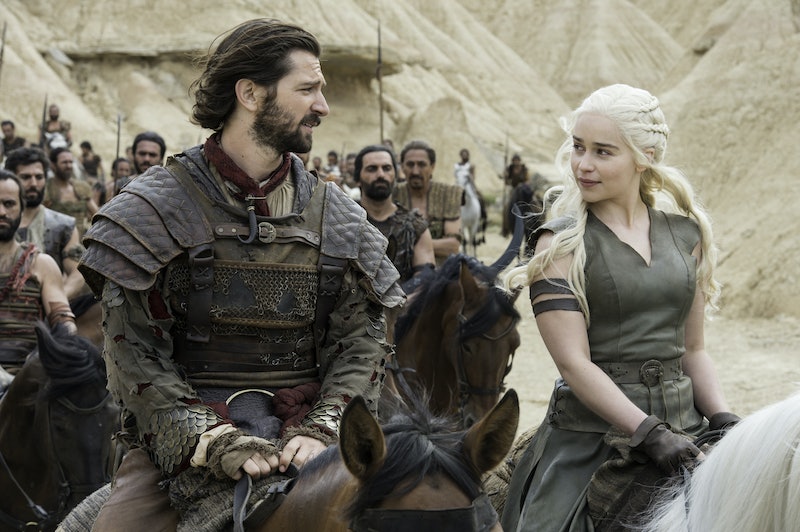 Ever since Daenerys Targaryen was first introduced in the pilot episode of Game of Thrones, fans have watched in awe as she's morphed into a truly phenomenal and inspiring leader, destined to make her way to Westeros and bring peace to the Seven Kingdoms. We've rooted for her every step of the way and sworn vengeance on those who would do her harm. But what if he destiny lies down a different path than we ever expected? What if Dany goes mad on Game of Thrones , much like her father Aerys II Targaryen did, aka The Mad King?

If you had asked me that question even a week ago, I wouldn't have dared to breathe such volatile accusations. I mean, Daenerys as a villain in this story? There's just no way that can be the endgame here, not when she's performed such admirable acts in the past. And yet there was a distinctively violent edge to her most recent speech to the Dothraki Army that left me feeling slightly uneasy about her long-awaited journey to Westeros. "Will you kill my enemies in their iron suits and tear down their stone houses?," she asked them.

And while I welcome the thought of Ramsay Bolton and Walder Frey meeting such an unpleasant end due to their continued success at being world-class jerks, I'm worried for those who don't necessarily have to be Dany's enemy, like the Starks and yes, maybe even the Lannisters. So her general approach to killing every person in her path is very worrisome and calls to mind another Targaryen family member who didn't care who died as long as he got to rule...

Thanks to Bran's latest vision reel of everything that has (and will) come to pass, viewers caught their very first glimpse of the Mad King himself, sitting upon the Iron Throne while screaming his infamous line to "Burn them all" during the great uprising. Was this perhaps to show us what Dany will eventually become: the Mad Queen? Her desire for the crown has increased significantly since Season 1, but as is the case with so many leaders in real life — the more you want power, the less you should probably have it.

Dany has committed violent acts in the past, but it's always been under the guise of a higher purpose, like freeing all the slaves (hence the title, Breaker of Chains). But without those reasons to back her up, all that talk about killing to take what is hers "with blood and fire" sounds a lot more sinister than it did before.

Even her decision to kill the Dothraki khals felt a little too villain-esque for comfort. Sure, they were being extremely rude to her and making derogatory remarks, so it's not like they didn't deserve some sort of punishment. But the look on her face as she watched them burn felt like maybe she was enjoying the whole torture process a little too much. Dany's always resorted to violence when necessary, but this seemed to come more from a place of enjoyment than anything else.

It's also worth mentioning the wildfire portion of Bran's vision. We know that it was used to help defeat Stannis' army during the Battle of the Blackwater. We also know that the Mad King had a fondness for it and intended to use it on innocent lives during the rebellion, but he never got a chance to. (Jaime managed to slay him just in time.) So you can imagine my confusion when the vision shows wildfire being ignited underneath King's Landing. Could this be a glimpse into the future? Will Dany seek to carry out her father's work and use the concoction to bring the world to its knees?

I hate to think Dany would be capable of such a corrupt act, but maybe she's more like dear ole dad than we (and maybe even she herself) ever realized.