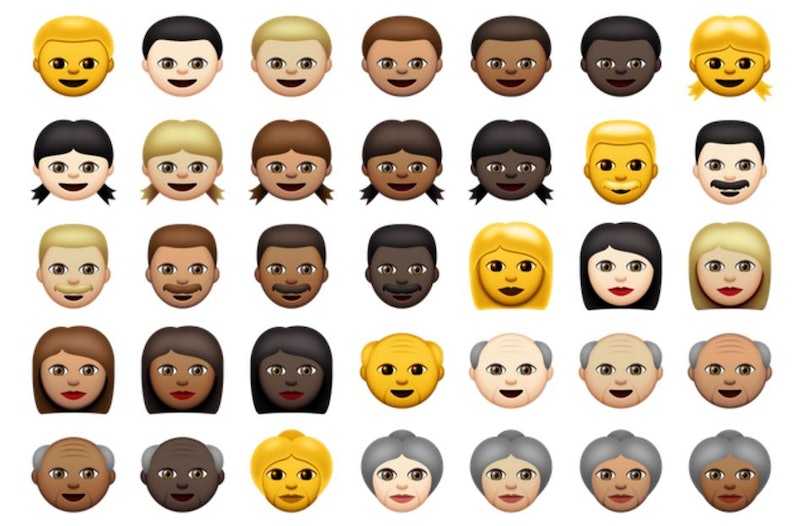 If ever there was a moment for a well-timed set of praise hands, this is it, my friends. New female Facebook Messenger emoji are on the way. And they're coming soon — as in "June 2, 2016" soon. Designed to be more diverse in general and more representative of women specifically, this change will take five emoji that have hitherto only been available as men and recode them as women. There will now be a female pedestrian, police officer, jogger, swimmer, and surfer. Obviously, having these emoji (and so many more!) shown only as men is woefully inaccurate. Not only can women be these things, but many woman are ... and darn proud of it. It's about time women also had emoji to reflect the different roles they choose IRL, amirite? Kudos to Messenger for stepping up to make emoji more inclusive.

After all, emoji usage is so universal in today's society that some scholars consider it a newly emerging language. Billions of emoji are sent every single day — according to Facebook, nearly 10 percent of all mobile messages sent through the Messenger app include emoji. Thus far, women using this popular chat platform have had to resign themselves to using male emoji in some instances when they'd rather use female ones. Women of color have had to opt for emoji that don't reflect their skin. Not any more, though!

As a post on the Messenger Facebook page announced, the new female emoji — along with all the other Facebook Messenger emoji — are standardized, meaning that the emoji you choose will be the one the recipient of your message sees, whether they are on Android, iOS, or some other platform. No more messages will get lost in translation or replaced with annoying little blank boxes. We'll just see consistent characters — which, bonus, are doing a much better job of representing the many different types of people who make this great big old world we're living in go round.

In fact, the updated emoji are part of a much larger update within the Messenger system aimed at creating more accurate representation within the social messaging world. In total, there are over 1,500 newly-designed Messenger emoji, including varied skin tones and even gender-agnostic options. You can pick the skin color and gender you prefer simply by toggling the new emoji picker. If you don't want to have to toggle every time you message, you can set your default emoji choice the first time you fire up the new system.

It goes without saying that this is great news. While the gender of a handful of emoji may seem like a first-world problem, it's reflective of the much larger issue at hand: gender equality. As society continues to become more digitally native, the use of emoji will only increase exponentially. The standards for these programs should evolve to reflect the fact that men and women are deserve the same rights and opportunities across all sectors of society, and that includes our digital communication.