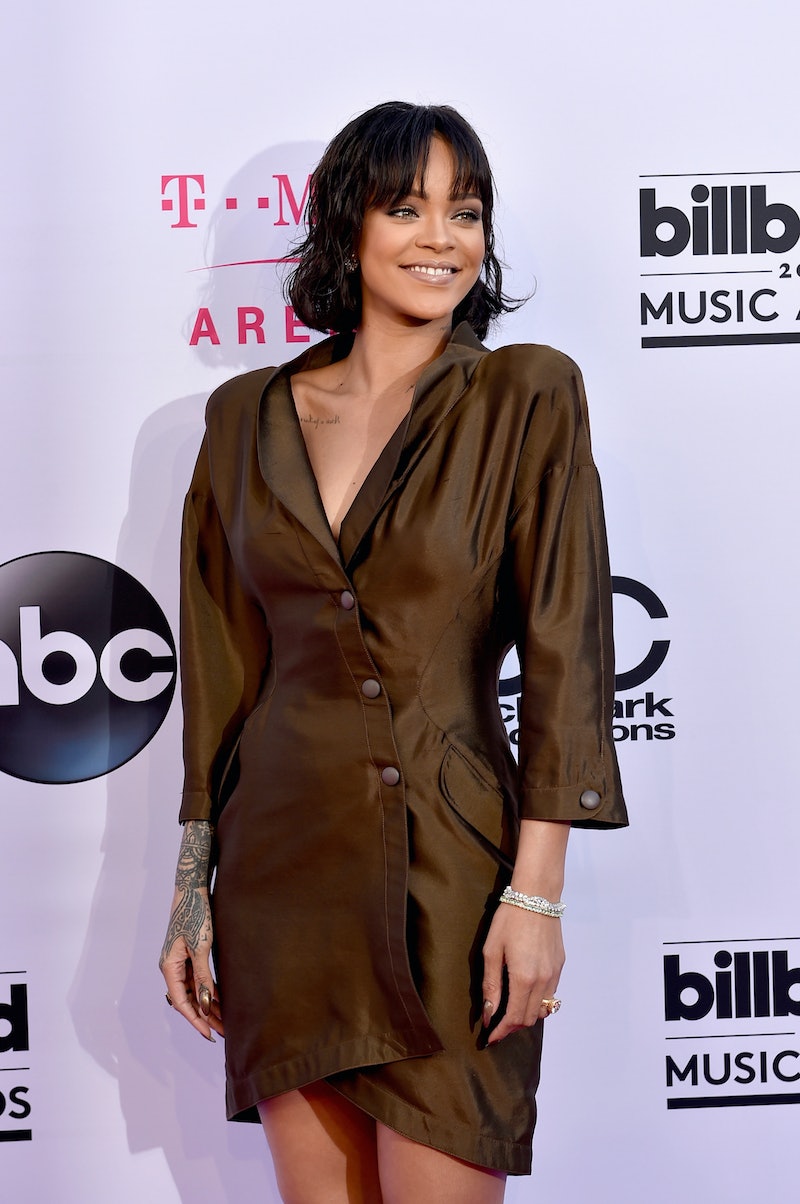 With summer officially here and the weather getting super hot, most people are starting to hit up the pool or beach for the first time this season. Celebs are no exception, and Memorial Day weekend brought lots of vacation pics. Some celebs are still vacationing, including Rihanna, whose swan float she posted on Snapchat is bound to be a summer staple. The singer posted several Snapchats from her account Wednesday of her floating in a pool on a giant patterned swan float (someone else was videoing). So where do you buy Rihanna's swan float? I've got the answer.

The pool float Rihanna posted on Snapchat is the Gray Malin x Funboy collection float, and it's available for preorder on the Gray Malin website. The official ship date is soon — June 7. In case you're not familiar with Malin, he's a photographer who's known for his iconic photos of beaches, including his famous photo of Australia's Bondi Beach, which is what's on the float Rihanna managed to get before the official release date. (Are you surprised?)

The float is limited edition, and the print was hand silk-screened onto the vinyl. Sounds pretty chic, right? Here's Rihanna floating on it.

How amazing is it? And it's surprisingly big.

And here's another shot (with the gorgeous pool Rihanna was floating in). Can I join her on vacation like, right now?

Here's the official version Rihanna's floating on, which is totally amazing. What a fun way to have a piece of Malin's photography.

But if the $128 price tag is a little out of your budget (or you just can't wait until June 7 to get your own), here are four swan float alternatives that won't break the bank.

This Urban Outfitters version of the famous swan float isn't too expensive at $48, and it features a classic white swan look.

Don't necessarily want to float on your swan raft? Use it to hold your drinks instead. This mini version has four cupholders.

Want to look really luxe this summer pool season? This gold swan float will do the trick. It's not exactly subtle, but who really expects that of a giant floating swan?

Another affordable option, this one from Amazon is your basic swan float, but at less than $35, it's really inexpensive. Add this to your list if you're on a budget.

More like this
Kim Kardashian Just Wore A Latex Bra Top For Miami Art Basel
By Dominique Norman
Kendall Jenner Wore A $38 Sweater & Sports Bra For A Chic Workout Fit
By Allie Fasanella
The 8 Best Walking Shoes For Metatarsalgia, According To A Podiatrist
By Lauren Moison
Anguilla Is The Under-The-Radar Caribbean Destination You Need To Visit
By Rachel Lapidos
Get Even More From Bustle — Sign Up For The Newsletter