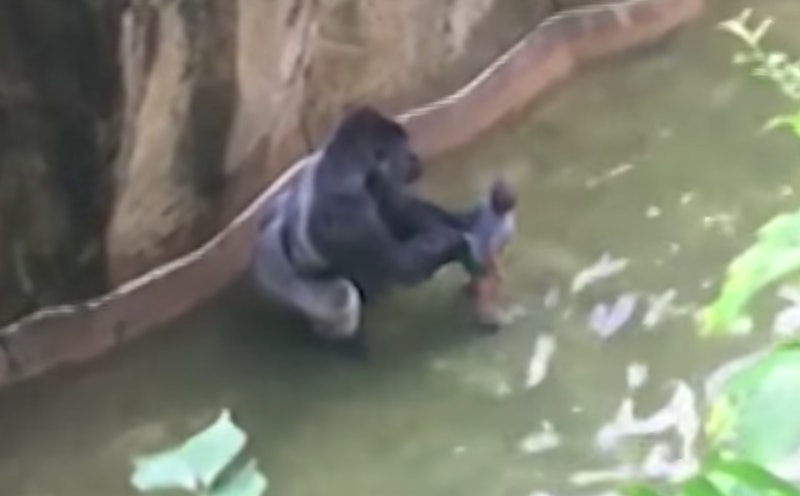 The killing of Harambe, a western lowland gorilla, at the Cincinnati Zoo this weekend has united the internet — mostly against the zoo and the mother of the boy who fell into the enclosure. But there has also been positive reflection on human responsibility for animal welfare, especially in captivity, as well as a time of communal mourning for the 450-pound gorilla. This is fitting, given the meaning of the gorilla's name. Even the man who named him hopes that this can have a positive influence on the world, and on western lowland gorillas in particular. So what does "Harambe" mean?

Dan Van Coppenolle, a counselor at Brownsville Independent School District in Texas, explained in a piece for CNN what the name meant, and how he was inspired to name the newborn gorilla at the Gladys Porter Zoo. "It's a Swahili name meaning working together, pulling together, helping each other, caring, and sharing," he said. He was listening to Rita Marley sing the song "Harambe" while exercising on the treadmill back in 1999. She explained what the word meant, and he was struck by the name and decided to share it with his students. Then he came across a naming competition for a newborn gorilla:

After I was finished exercising, I sat down to read my local paper and came across an article about a contest to name a baby gorilla at the Gladys Porter Zoo in Brownsville, Texas. Immediately, a light bulb went off in my head and I thought of Harambe. It seemed perfect: an inspiring African name for an endangered species.

Van Coppenolle entered the name into the competition with a description of its meaning. "The uplifting message of the name seemed fitting, and the judges agreed," he wrote. Van Coppenolle was interviewed on TV and in the local newspaper, and he was able to meet officials at the zoo, including Jerry Stones, the zookeeper who raised Harambe from infancy (and called him "Skeeter" before he was officially named).

Then Van Coppenolle began regularly visiting the zoo with his sons and nephews. They grew up with Harambe. He also used the name as a lesson for his students in classes he taught at a Brownsville elementary school. They discussed concepts like compassion, cooperation, and tolerance — something he hopes the general public can do now. He explained in his piece:

Upon learning of his death this week, my wife, sons, nephews, students, and family members were deeply saddened. But despite this sadness, I am also hopeful.

Van Coppenolle makes the very good point that the discussion may raise awareness, and even funds — a "Remembering Harambe" fund has been set up by the Gladys Porter Zoo — for the endangered African lowland gorillas still living in their natural habitats. He hopes that perhaps one day "we won't have to resort to raising these great creatures in captivity to help ensure the species' survival." That would be a great day.

More like this
Picky Eater? Sensitive Stomach? This Vet Nutritionist-Designed Dog Food Has A Plan For That
By Maria Cassano
Dog Trainers Say These 30 Cheap Things On Amazon Are Pure Genius
By Allison Bolt
Ashamed Of Your Screen Time Stats? Here's How To Change That
By Alexis Morillo
You’ve Got 'Love Island’s Farmer Will All Wrong
By Jack Orenstein
Get Even More From Bustle — Sign Up For The Newsletter
From hair trends to relationship advice, our daily newsletter has everything you need to sound like a person who’s on TikTok, even if you aren’t.