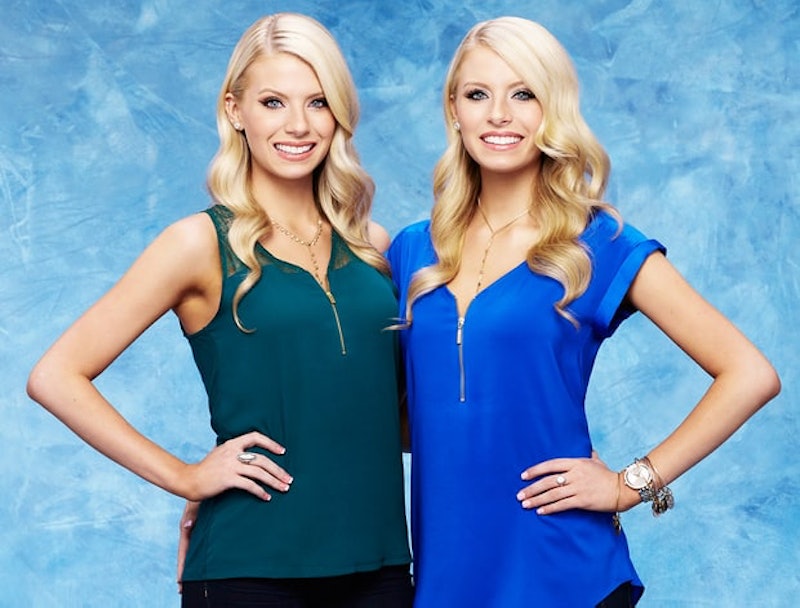 We all knew that the Ferguson twins never stood a chance when it came to winning Ben Higgins' season of The Bachelor. It's nothing against them personally, but the show films over a short period of time and most of their time was spent playing up the twin gimmick instead of highlighting aspects of their individuality. Plus, it was just very awkward to see two girls who are so close in every way competing for affection of the same men. That's why I am so happy that, according to Us Weekly, Emily and Haley Ferguson are joining the Bachelor in Paradise cast.

Emily and Haley instantly garnered a ton of attention from the moment they stepped out of the limo on night one of their Bachelor season. I really feel like they were meant for reality TV, and I can't even hate them for being "professional twins" as a living, because who doesn't want to be famous for no reason?

While the news isn't yet confirmed by BiP, I'm hopeful that it really is true. I was hoping that the twins would be a part of the Bachelor spinoff series. This is the ideal show for them to be on, and there are many reasons why.

They Can Shine As Individuals

I'm not gonna lie, it was tough to tell the twins apart when they were on The Bachelor. Not only did they look and act alike, but they really played up how in sync they were as twins. Don't get me wrong, it made for some entertaining television, but Emily and Haley are more than just a set of twins. I'm sure that they each have something great to bring to the table.

They Will Not Be Competing For The Same Man (Hopefully)

Yes, the sisters are super close, but it had to be really awkward when they were both trying to date Ben. Bachelor in Paradise will have multiple suitors for the twins, so they will not have to compete for the same boyfriend... well, in theory. It is still possible that they would have an interest in the same guy.

They Are Committed To Finding Love

The twins were all in while they were on The Bachelor, so I am sure that they will be open to finding love on BiP. I just hope that they don't fall too hard too fast; although that would make for captivating television.

They Are Always Quotable

Whether they were saying the same thing at the same time or interacting with their fellow cast members, the twins were a barrel of laughs. Sometimes it was hard to tell if they said these things on purpose or if it was just how they are, but they were always saying the darnedest things.

They Have Great Reaction Faces

Emily and Haley really wear their hearts on their sleeves. They could not put up poker faces no matter how hard they tried. Both of them were always so expressive, and on Bachelor in Paradise, they would probably provide perfect material for reaction GIFs.

They Aren't Afraid To Stir The Pot

Emily and Haley were never afraid to speak their minds in the Bachelor house, so I'm sure that they will not keep it to themselves if they have issues with anyone on BiP.

They Can Still Play Up The Twin Thing

I really do think that going on BiP will give Emily and Haley a chance to shine as more than a pair of twins, but there is also nothing wrong with being proud twin sisters. I don't think that they need to put their love of twinning behind them necessarily, and if you really think about it, it is unique, in its own way, that they twin so hard.

Emily and Haley will be great cast members on Bachelor in Paradise, and I cannot wait to see what kind of shenanigans they get into, if they do, in fact, join the show. I'm just hoping that they don't end up in another twin love triangle.