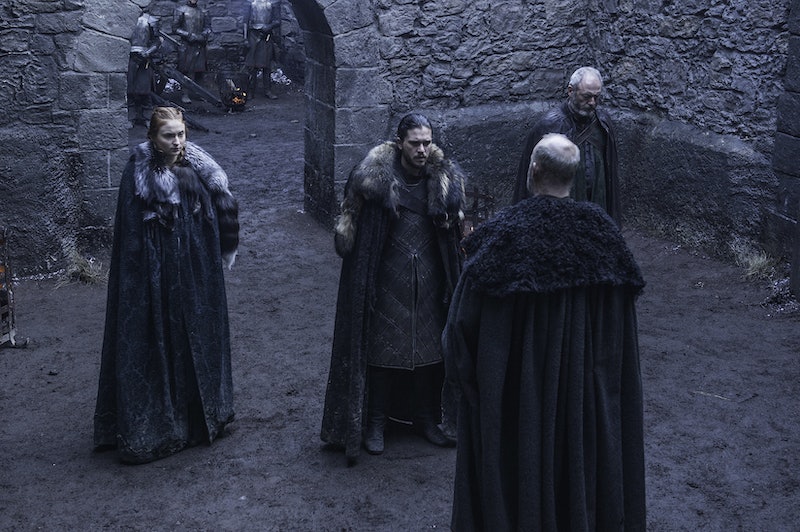 Jon Snow famously rose from the dead earlier in Season 6 of Game of Thrones, freeing him from his loyalties to the Night's Watch. What it doesn't free him from, however, is the universal truth that all men must die. "Valar Morghulis," as many would say. Despite the joy of having Jon Snow back in the mix, those pleased with Jon Snow's resurrection didn't get much time to celebrate because as faster than you could say "Damn, Daenerys," Jon Snow was back at it again with plans to reclaim Winterfell from the Boltons. Jon Snow, reunited with Sansa and with Ser Davos by his side, is working to unite the Northern armies in what's promising to be a battle of epic proportions. With battles comes death — but could Jon Snow die again on Game of Thrones?

In short: Yes. Death is such a constant at this point of Game of Thrones that it's weird when an episode doesn't kill someone off. Game of Thrones has subverted expectations since the beginning, so what would make Jon Snow different? Surely the last person anyone expects to die now is the man who just came back to life. If Jon Snow does die, however, it's going to be OK. Fans all been through this before, and we've learned a few things.

It's Known That Jon Snow Can Come Back From Death

It was revealed in Season 3 that Beric Dondarrion of the Brotherhood without Banners had been brought back to life by his compatriot Thoros of Myr a total of six times. This means as long as Jon is able to keep most of himself together and manages not to lose his head or anything, Melisandre will likely have at least 5 more chances to bring Jon back to life.

With only a few seasons left of Game of Thrones , important characters are sure to start dropping left and right. While this is certainly a huge bummer, at least it will provide some solace in the fact that a late-show death is far better than having never had Jon Snow survive past Season 2.

He Already Saved The Night's Watch

The truly awful thing about Jon's death at the end of Season 5 was that it left Alliser Thorne in charge, who had no interest in working with the Wildlings or acknowledge the greater threat that lied beyond the wall. Luckily, with Jon Snow's resurrection came a new order of things at Castle Black. Jon Snow executed the dissenters and placed Castle Black in the hands of the trustworthy. Now the death of Jon Snow won't mean the death of the Night's Watch or the death of the Battle against the White Walkers, Jon's death will be far less traumatic the second time around.

Others Are Ready And Able To Take Over For Him

Everyone loves Jon Snow. Those dreamy locks of jet black hair, his clueless nature, the fact that his dead body looks better than most living ones. When Jon Snow first died, the most devastating aspect of it would be that no one would be able to carry out the work that Jon Snow spent 5 seasons trying to accomplish. Diplomacy with the Wildlings, a plan for the White Walkers, and ensuring the safety of Westeros was the last thing on anyone's mind. Everyone but Jon Snow seemed far too busy worrying about their own personal matters, and only Jon was thinking about the larger picture.

Now, however, Jon has his half-sister (or possibly cousin) Sansa by his side to continue his mission should he fall. Similarly, Jon Snow has the allegiance of the motley crew that is Ser Davos, Melisandre, and Tormund to keep the bigger picture in mind. That's not even mentioning Samwell and Edd, both of whom are in positions of power with the opportunity to affect change. When Jon Snow first died, his mission died with him.

With these extra weeks of life, Jon has been able to carry on his mission to others — meaning that if he dies again, it will not be in vain.