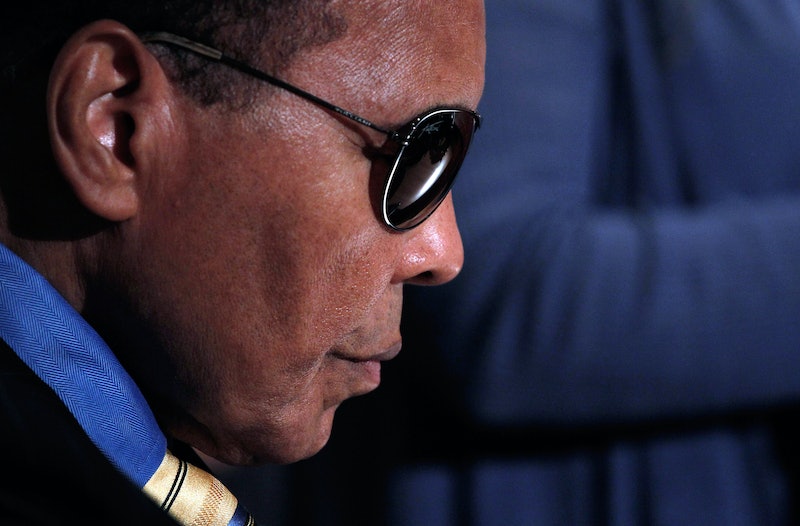 On Friday, beloved athlete Muhammad Ali died at 74, leaving behind a legacy that all people — heavyweight watchers or not — could appreciate. And Ali, who passed away in Phoenix following a respiratory illness complicated by Parkinson's disease (which he was diagnosed with in 1984), also left behind a legion of fans. That much was more than clear following his death.

Of course, many of those fans were famous, including President Barack Obama, who, in 2010, wrote a tribute to Ali in USA Today, outlining what the boxing star meant to him. Wrote Obama, "We admire the man who, while his speech has grown softer and his movement more restricted by the advance of Parkinson’s disease, has never lost the ability to forge a deep and meaningful connection with people of all ages."

And that certainly is true, judging by the mass reaction to Ali's passing. As Obama also wrote, to everyone, Ali was, and will always be, "the champ." (Following Ali's death, Obama released a statement about the boxer as well, saying he "shook up the world. And the world is better for it.")

Here are just a few reactions from some of Ali's fans circulating the web, proving that the champ will never, ever be forgotten.

But, most of all, it seems fans are letting the legend speak for himself — because no one can speak about how Ali should be remembered as beautifully as Ali himself.

It's easy to believe he's remembered for all this and more.

More like this
This Is When Netflix Is Going To Start Charging You For Sharing Passwords
By Darshita Goyal
6 Organizations Fighting Police Brutality That You Can Support Right Now
By Syeda Khaula Saad and JR Thorpe
Watch Jacinda Arden’s Devastatingly Honest Resignation Speech
By Sam Ramsden
Twitter Is Shook As Tom Brady Holds Back Tears Announcing His 2nd Retirement
By Marina Watts
Get Even More From Bustle — Sign Up For The Newsletter
From hair trends to relationship advice, our daily newsletter has everything you need to sound like a person who’s on TikTok, even if you aren’t.