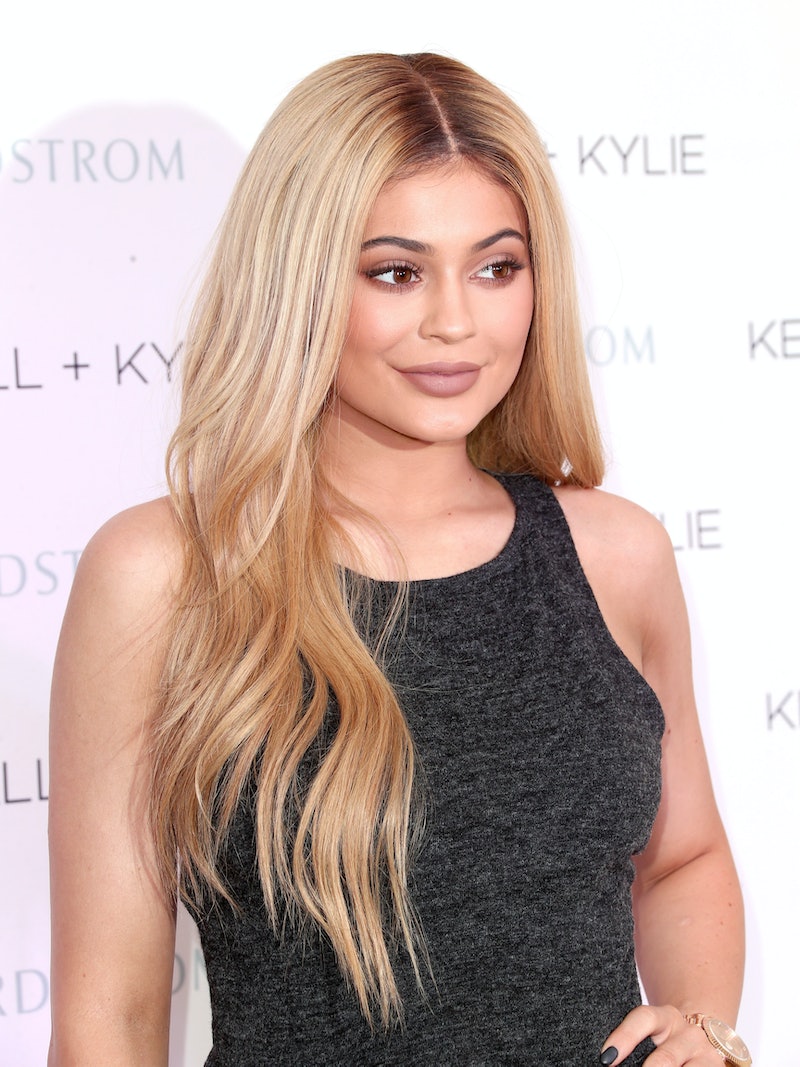 When it comes to her cosmetics line, Kylie Jenner is all about surprises, last-minute notices, and big announcements. But based on the speculation on Twitter, the surprise of the next Kylie Cosmetics Lip Kit shade may just be spoiled. Fans and beauty-obsessed users are curious to know if the rich, dark red matte lip color Jenner stepped out in last week is the next shade to be released. And based on what we know about Jenner's Kylie Cosmetics releases, and this shade in particular, they have every reason to be freaking out!

If you, too, need a moment to freak out before reading all the details, by all means take one! Because Twitter may have just cracked Jenner's Lip Kit code and figured out the next shade before the first official announcement of it. Let the freak out commence.

OK, back to business! According to Seventeen Magazine, Jenner grabbed dinner in Hollywood, CA on June 2 in gray suede heels, a bandage jumpsuit, and a stunning deep red matte lip color. Naturally, everyone went to Twitter to discuss whether or not that lip color could be the next shade for Kylie Cosmetics.

While nothing has been confirmed just yet, the general consensus from Twitter is that this dark red matte lip is probably the next Matte Lip Kit shade. If you need more hard evidence, let's go over the facts.

Seventeen pointed out a few things that could very well make the connection. First off, when Jenner released Exposed, she did mention that two new shades were on their way on her Snapchat. Since then, the dark Majesty has been released, with one still to be determined. Also, before officially announcing Exposed, Jenner had been wearing the shade for weeks before. Finally, Jenner is a good spokesperson for her own brand because she pretty much only wears her own lip products.

On top of all that, the shade is totally unique compared to other Lip Kit colors. It looks slightly similar to Kourt K, but has a much deeper red base as opposed to Kourt K's plum color.

It is absolutely stunning. Just look at it's deep red hue, and it's matte texture. Even though it's definitely an autumnal color, Jenner made it perfect for spring/summer with an edgy yet skin-baring outfit.

Now that sounds like something, doesn't it? Yes, yes it does. And the fans know it!

If Jenner was hoping to be sneaky with the release of this Lip Kit shade, she definitely wasn't trying hard enough. I would't be surprised in the slightest if fans on Twitter cracked her system, and figured this shade out before Jenner announced it herself. While nothing has been confirmed quite yet, I bet we're going to officially find out about this shade via King Kylie herself within the next week or two. Let's just hope it's soon.

Because the sooner we can get this lip color on ourselves, the better!