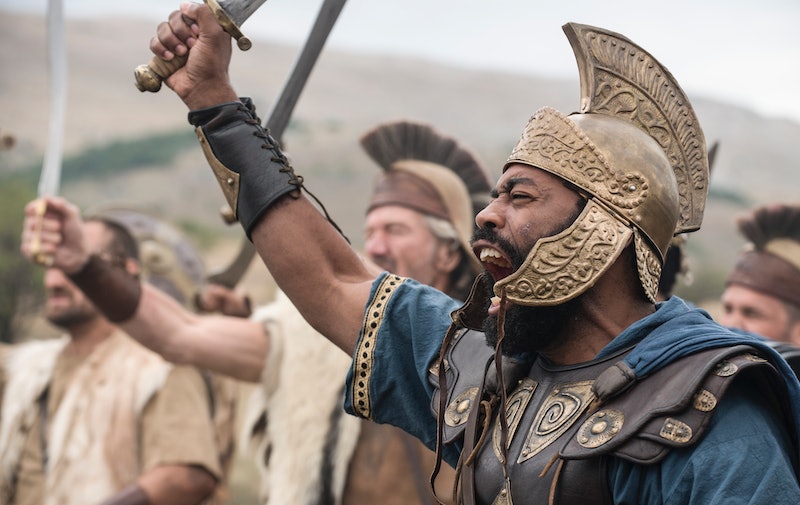 Though I've enjoyed some of History's reality TV shows over the years, I do miss those specials and docuseries explaining real historical periods and events that form the foundation of the network. Luckily, we'll get a brand-spanking-new one starting Monday, June 6 at 9 p.m. ET, Barbarians Rising. Still, it'd be natural to wonder how much of Barbarians Rising is a true story while you're watching this four-part docu-drama.

Though this series about the fall of the Roman Empire as told through the eyes of the barbarian rebel leaders that eventually contributed to its downfall features dramatic re-enactments, it should be an altogether accurate depiction of history. "The four-part docu-drama reveals the true story of the 700-year battle for supremacy, a fight for freedom that would shape the world to come," History describes the series on its website. And the nine main barbarian leaders featured in the series were all real people that helped bring down the Roman Empire.

The "fully dramatized portrayals" of the barbarian leaders, as History calls it, will be accompanied by expert commentary that includes historians, military leaders, and civil rights activists. They will help "reveal the fact-based history behind the legends," the network said in a press release about the new series. This contemporary commentary will not only help Barbarians Rising tell a true story about the past, but it should also help us understand why our world is the way it is today.

Of course, it's possible that Barbarians Rising will not be 100 percent accurate since history is based on various sources and accounts that not all historians may agree with and that can change as new discoveries are made over time. But the stories of these nine barbarian leaders should be generally consistent with what we've learned about them over the years. Without any further ado, get to know a little bit about the history Barbarians Rising will present about these "legends" below.

Barbarians Rising starts out with the story of Hannibal of Carthage in North Africa, the son of the general Hamilcar, who had fought the Romans in the First Punic War and was forced to leave Sicily after the Romans destroyed the Carthaginian fleet, according to History's website. Hamilcar made his son vow to get revenge on the Romans, and he set out to do just that when he became a general himself.

With a large army of approximately 100,000 men and his now-famous use of elephants, Hannibal eventually marched his forces across the Alps and into Italy. Though the majority of his fleet was decimated by that time, the remaining troops wreaked havoc on the Roman Empire, even destroying a Roman force at Cannae, which was the worst Roman defeat of the war, according to History.

But after the armies led by Hannibal's brothers were defeated and the Romans attacked Carthage, the general negotiated a peace treaty with Rome before being forced into exile. Once Hannibal heard that the Romans were coming for him, he poisoned himself instead of allowing his perennial adversaries to capture him, which was likely in 181 or 183 B.C.

Next up in Barbarians Rising will be Viriathus of Lusitania, which was located in parts of what is now known as Portugal and western Spain, according to his description on History's website. The Romans broke a peace treaty with the Lusitanians around 151 B.C. and killed or enslaved all of the men of fighting age, which has been reported to be about 30,000 people. Viriathus escaped and went on to lead a rebel army of fellow survivors against the Romans.

Viriathus had his army use guerilla warfare in an effort to combat the highly-trained Roman soldiers, and they were successful, so much so that neighboring tribes used this strategy against the Romans as well. Viriathus tried to initiate peace with the Romans in 139 B.C., but they turned his messengers against him, and they assassinated the rebel leader while he slept.

Spartacus is a historical figure who may be best known by his dramatic portrayals, such as the eponymous 1960 epic film, whose trailer can be seen above, and the more recent Starz series, but this guy was very real. Born in Thrace, which was located in what is now Eastern Europe, Spartacus was said to have been captured and enslaved by the Romans after serving as an auxiliary in their army, according to his description on History's website.

After being chosen to become a gladiator, which we know is not such a great job, even when it's glamorized in such films as 2000's Gladiator, Spartacus organized an escape with dozens of his fellow gladiators. The army grew after Spartacus and his troops defeated the Romans at Mount Vesuvius. Three powerful Roman generals (Marcus Licinius Crassus, Pompey, and Lucullus) eventually came together with their armies to take down Spartacus and his rebels. It is said that Spartacus was wounded in battle, but his body was never found. As for the survivors of this fight, they were crucified along the Appian Way to Rome as a warning to anyone thinking about challenging Rome in the future.

Arminius and his brother Flavus were sent to Rome as hostages after the Romans defeated their Cherusci tribe, History's website describes. While there, they were forced to assimilate to Roman culture, becoming educated, training as soldiers, and becoming Roman citizens. Arminius, a statue of whom now located in Detmold, Germany is shown above, eventually rose through the ranks in the Roman military.

But once Arminius returned to his homeland of Germania and discovered that his people were being heavily taxed and treated as slaves by the Roman governor Varus, he decided to lead a rebellion. From then on, he sort of played as a double agent, gathering intelligence about the Romans while also forming a Germanic coalition to kick them out.

Arminius and the rebels ambushed the Romans and used guerilla tactics. As "one of Rome's most humiliating defeats," History describes on its website, this was a big win for the barbarians. Arminius then became the leader of the Cherusci, and his loyalty was completely with the Germanic tribe once again. Arminius fought the Romans for more than two years before they kidnapped his wife and he was injured in a battle at the Weser River. His retreat meant the end of his rebellion, and he was betrayed and murdered by a member of his own family, according to History.

Boudica is the sole female rebel leader featured in Barbarians Rising, but boy, was she fierce. She was born into a royal family and she married Prasutagus, the king of the Iceni, a tribe of Celtic warriors in the Roman province of Britannia, History's website says. Though the Romans and Iceni were at odds, they ultimately found peace, and Prasutagus agreed to make the Roman emperor co-heir to his kingdom, along with his wife and two daughters.

But when Prasutagus died, the Romans didn't live up to that promise. The Romans annexed Prasutagus' lands, beat Boudica, and violated her daughters when the former queen protested, History's website explains. The relatives of the king were enslaved.

After all of that, Boudica had revenge on the brain, and she united British tribes to rebel against the Empire. She led her army on a "slash and burn campaign against the island's Roman settlements" that destroyed three major hubs of Roman power and murdered "Romanized" civilians and a Roman legion, History describes on its website.

However, Boudica's forces were eventually defeated by the Romans on a plain near Londinium. There are varying accounts of Boudica's fate. Some say she escaped the battle, others belive she poisoned herself, and there's another record of her dying from an illness while planning a new attack. However, most historians agree that she was the first to unite the people of Britain.

And now we get to the Goths, thanks to Fritigern, who was from what is now known as Romania, according to History's website. After his tribe converted to Christianity, he asked fellow Christian and Roman emperor Valens to give his people asylum so they could escape the Huns, and in return, her would give the Roman army soldiers. Valens allowed the Goths to cross the Danube and settle in Thrace, but his general Lupicinus took advantage of the Goths' desperation by charging them high prices for few rations in return. What's more, Lupicinus invited Goth leaders to dine at the Roman camp only to betray them by killing their bodyguards and capturing them.

The Romans released Fritigern on the condition that he calm the angry Gothic masses, but he instead worked on getting revenge, attacking Lupicinus' army and gaining support from other rebel barbarians, according to History. Fritigern's troops eventually faced off with legions from Eastern and Western Emperors, and the Goths defeated the Romans. They settled back in Thrace, no longer under Rome's rule. Fritigern died shortly afterwards, but victory was sweet for his tribe.

After Fritgern's death, Alaric became the leader and eventual king of the Visigoths, History's website says. Alaric wanted to have his warriors become an official part of the Roman army, but the Romans' ill will and betrayals turned him against them for good. His troops faced off with those of the half-barbarian general Stilicho several times over the years.

After Stilicho was arrested and executed because the Romans suspected he was an enemy of the state, his remaining barbarian forces joined Alaric's army, History's website says. Alaric and the Goths entered Rome, demanding the freedom of 40,000 Gothic slaves and command of the Roman army. The Romans freed the slaves and gave Alaric a large sum of gold, but they refused to make another barbarian the commander of their army.

The Goths attacked Roma again for the third time in three years in 410 A.D., but Alaric died of disease that same year. Still, his reign showed that Rome wasn't invincible anymore, according to History.

Attila is one of the more famous rebel leaders to be featured in Barbarians Rising, and for good reason. As the leader of the Huns from Central Asia, Attila basically wanted to conquer the world, according to History's website. When Attila became the sole ruler of the Huns in 445 A.D. after his brother Bleda's mysterious death, the Romans recognized him as a major threat.

The Hun attacks in Eastern Europe caused a refugee crisis, which motivated barbarian tribes to make nice with the enemy Romans, as the aforementioned Fritigern did for the Goths. After the Huns developed siege weapons to take over walled cities and Attila eventually partnered up with the Vandal King Geiseric, the Huns' invading army was a serious force to be reckoned with, History's website says. Some incredibly bloody battles for both sides ensued.

However, the Huns became less of a threat to the Roman Empire when Attila mysteriously died after his marriage to an Ostrogothic princess, History describes on its website.

Geiseric was king of the Vandals, a traditionally wandering tribe who were eventually allowed to settle in Roman North Africa, History's website describes. Once they arrived, they were told to return to Spain, but Geiseric did not take no for an answer. The Vandals defeated the Roman forces, conquered a coastal territory, and then successfully led his troops into Carthage. Geiseric then turned "his Vandals into the Mediterranean's most formidable pirates," as History describes, and captured and sacked Sicily. While Rome was busy fending off Attila and the Huns, Geiseric and the Vandals easily raided Southern Europe.

In the 450s, Geiseric simultaneously made peace with the Roman Empire and bribed Attila to attack the Romans, according to History. After Emperor Valentinian died in a palace coup, Geiseric and the Vandals sacked Rome in 455, which was essentially the final nail in the coffin for the once-mighty empire. Geiseric would live for more than 20 years after that, dying in 477 after nearly 50 years on the throne.

Clearly, Game of Thrones has nothing on the history of the barbarian leaders.