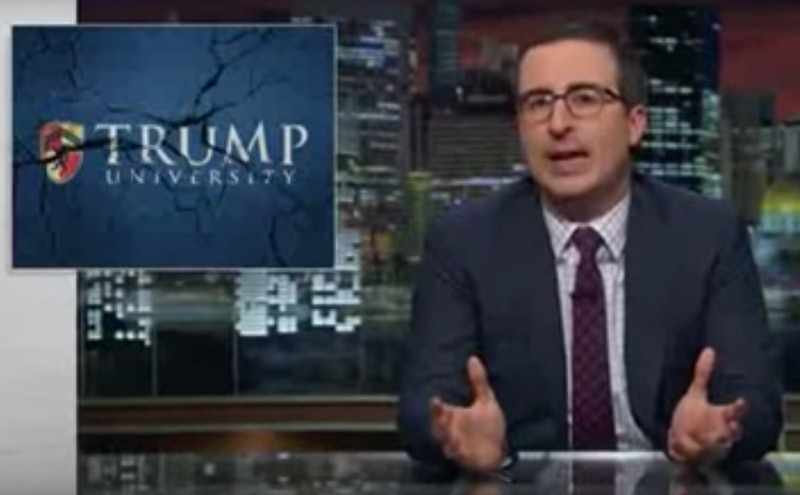 Donald Trump is leading more than just the delegate race among the presidential contenders. As John Oliver pointed out on Sunday's edition of Last Week Tonight, USA Today reported that Trump also has been involved in about 3,500 lawsuits across the country — an unprecedented number for a presidential candidate. Last week, one of them, a pending lawsuit against Trump University, went mainstream when a judge decided to release previously private documents and Trump called out the judge's Mexican heritage. Which brings us back to Oliver, who berated Trump's real estate "university," with some of the best insights into Trump and his campaign so far.

The most recent controversy started last week when Trump said at a campaign rally in San Diego that the judge is a "hater." He then went on to mention that the judge "happens to be Mexican, which is great." Trump added, "I think that's fine," something Oliver took issue with:

Oh, oh, you do, do you? You think that's fine? Great news people of Mexican descent — Donald Trump thinks it's fine for you to be a human being existing on this planet.

Oliver goes on to point out that the judge, Gonzalo Curiel, was born in Indiana. But that didn't stop Trump from claiming that he was unfit to rule on the case. CNN's Jake Tapper brought up the issue more than 20 times in an interview, asking about Trump invoking the judge's race when "talking about whether or not he can do his job." Trump's response?

Tapper, surely cutting him off in disbelief, said, "But he's American, he's an American?" Trump continued on unfazed:

He's of Mexican heritage, and he's very proud of it — as I am where I come from...

This does not fly with Oliver, who asked, "Wait — where exactly are you from?" before answering his own question:

Because you look like you came out of a clogged drain at the Wonka Factory, and you know what, that's great. I think that's fine. But think about what he's implying there: the judge is unfit to do his job because of his ethnic background.

But Trump didn't end there. Then he said "it's possible" Muslim judges wouldn't be able to treat him fairly because of his comments on a travel ban on non-citizen Muslims. Oliver called that "the dictionary definition of 'bigotry'," before adding, "except after this campaign the definition of 'bigotry' might just become See: Trump, Donald."

Then Oliver got into the case against Trump University that Judge Curiel is overseeing and what the documents he ordered release actually say. Some of the revelations were seemingly damning.

Oliver said Trump University was actually amazing because of the big claims Trump made when it first opened — and how far from reality that truly was. Trump made a commercial selling the venture explaining that the professors were handpicked and that if you didn't choose to attend, "You're just not going to make it in the world of success." New York's Attorney General began to look into it, noting that the first problem they found was that it wasn't actually a university.

"Holy shit," Oliver said, "Trump University wasn't even a university, which makes you wonder: what the fuck was in Trump Steaks? Oh god, it was possum, wasn't it? It was possum, you monsters!" But on a serious note, according to depositions Trump didn't even handpick the instructors like the ad claimed and couldn't even remember the names of the "school's" faculty.

That's probably a good thing, Oliver counters. "Anything Trump's tiny fingers touch turn into an ex-wife or an abandoned casino." But it, of course, gets worse:

According to the sworn testimony by several former employees, many instructors and mentors had no experience buying or selling real estate. In fact, one had worked as a salesman for Lowe's, and another had been manager for Buffalo Wild Wings. ... And even a former member of Trump's own sales staff testified that it was, among other things, "a joke... a facade... [and] it was just selling false hopes and lies."

And sure, to be fair, Oliver counters, "Every university has sold some of its students false hopes and lies, it's just most of the time they call it a theater arts degree." In the end though, these weren't even really students. The documents — called "playbooks" by Trump U — contained instructions on how to upsell the buyers (aka students). One of the tactics was to only say prices ranged from $29 to $35,000 — nothing more specific. Also they sales people were told to be aggressive, and as the book read, "If they complain about the price, remind them that Trump is the BEST!"

Oliver had the best insight:

You might laugh, but that is the same technique that Trump has been using to run for president and, apparently, it fucking works!

But what about those who couldn't afford the courses? The playbook mention them too, specifically theorizing about a single mother who might need to buy food. The playbooks advised the salespeople: "Money is never a reason for not enrolling in Trump University; if they really believe in you and your product, they will find the money. You are not doing any favor by letting someone use lack of money as an excuse." Oliver's response is priceless:

"Lack of money is not an excuse" is not what single parents need to hear; it's what Donald Trump needs to hear when a fifth company of his inevitably files for Chapter 11 bankruptcy.

Students were not pleased. One put about $35,000 on a credit card. Another student was disappointed when he didn't get his photo taken with the former host of The Apprentice. "It ended up being a cardboard cutout of Mr. Trump," the student said in a deposition. Oliver had a great point here too:

[It] is actually a perfect metaphor for Trump University: you're expecting the real thing, but in the end, all you get is a tacky two-dimensional facade with Donald Trump's face slapped on it.

The playbooks are pretty damning — they even included specific instructions on what to do if an attorney general arrived on the scene — but the "most valuable lesson" here, Oliver argues, is what Trump University teaches about Trump's presidential campaign:

The playbook tells his salespeople, "You don't sell products, benefits, or solutions — you sell feelings." And that is what is happening now. Crowds at a Trump rally may not be able to point to a concrete benefit or solution he offers, but they know how he makes them feel — and that is jacked up and ready to boo any name that sounds vaguely Latino.

Oliver couldn't be more right about the Donald. Hopefully by November someone can prove his presidential campaign is also a fraud.

More like this
Eurovision Has Been Given A Whole New Look Ahead Of Its Liverpool Debut
By Bustle UK
'That '90s Show' Is Officially Coming Back For Season 2
By Gretchen Smail and Grace Wehniainen
The Plane Crash In 'Dear Edward' Is Based On A 2010 Tragedy
By Grace Wehniainen
Keyla Monterroso Mejia Is Finally The Star Of The Show
By Gabrielle Bondi
Get Even More From Bustle — Sign Up For The Newsletter
From hair trends to relationship advice, our daily newsletter has everything you need to sound like a person who’s on TikTok, even if you aren’t.