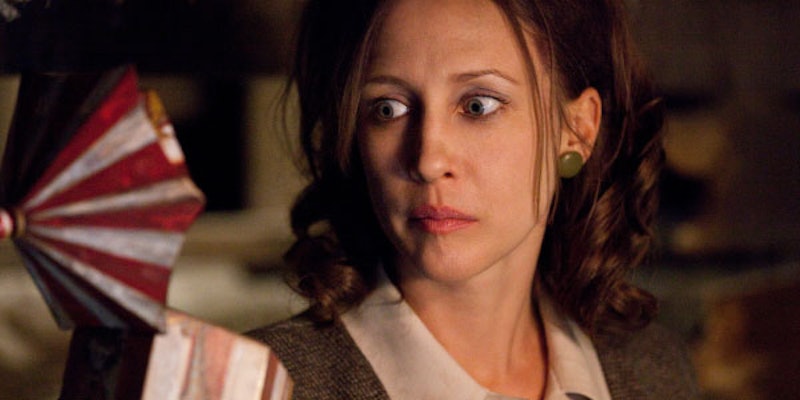 When my sweetie and I make plans for a Friday night, it usually looks like this: we text back and forth about all of the different restaurants we could try, decide we want to see a movie instead, have a loud "discussion" about which movie, choose to stay in with Netflix, and, at the last minute, meet up with friends at some bar. I'm guessing that Ed and Lorraine Warren, the married demonologists featured in The Conjuring series, probably had more exciting plans for Friday night — or any night, for that matter. While neither of the movies about the duo are documentaries, the first film tells the true story of the couple's research, which inspired The Amityville Horror. The good news for fans of this critically-acclaimed scarefest? Yep, The Conjuring 2 is also based on a true story, too.

Picture it: England, 1977. In the new movie, Ed and Lorraine head to Enfield, a northern suburb of London, where Peggy Hodgson and her four kiddos are being straight-up bullied by a buncha ghosts — you know that stuff's about to hit the fan when the kids are involved. Reports from the time show testimony from Hodgson describing how her two older children, an 11-year-old and 13-year-old, were the most haunted of the family. Talk about a rough go, right? The Conjuring 2 uses real research to tell this truly terrifying story.

The Committee of Skeptical Inquiry (CSI), a research group founded by scientists including Carl Sagan back in 1976, has "a mission to promote scientific inquiry, critical investigation, and the use of reason in examining controversial and extraordinary claims." (So, yeah, The X-Files also could be pretty darn real.) In 2012, CSI dug into the true story of Enfield Poltergeist and all of the horrors taking place in the Hodgson home at 284 Green St. "Two of the children, Janet and Johnny, attempted to convince their mother that their beds were unaccountably shaking," wrote reporter Joe Nickell, according to the CSI website. "The next night brought mysterious knocking sounds and the sliding of a chest of drawers in the girls’ room." Hodgson eventually called the police, and an investigating officer witnessed a chair move without cause.

The Warrens were just a few of the researchers who arrived to scope out the scene, but they are the most well-known sleuths out of the bunch. In the same article on the Enfield Poltergeist, CSI called the Warrens' stories exaggerated. Fangoria offered up some additional research on the matter. Citing the book The Demonologist , it pulled a quote directly from Ed Warren:

Now, you couldn’t record the dangerous, threatening atmosphere inside that little house. But you could film the levitations, teleportations, and dematerializations of people and objects that were happening there—not to mention he many hundreds of hours of tape recordings made of these spirit voices speaking out loud in the rooms.

While he died 10 years ago, Lorraine, 89, served as a consultant on The Conjuring. "The things that went on there were just so incredibly frightening. It still affects me to talk about it today," she told USA Today upon the release of the first movie. The Conjuring 2 stars, Patrick Wilson and Vera Farmiga, visited Lorraine again in preparation for the second film, snapping a selfie in front of the Warrens' Paranormal Research Center.

So, will The Conjuring 2 do Lorraine proud and make you sleep with the light on? Find out when it drops June 10.

More like this
Gerard Butler Insisted On Adding This Pivotal Scene To 'Plane'
By Catharina Cheung
Jemima Khan Used Her Own Life As Inspo For 'What’s Love Got To Do With It?'
By Darshita Goyal
Alicia Silverstone Revives Her 'Clueless' Character In This Super Bowl Commercial
By Jake Viswanath
Rupert Grint Just Shared A *Major* Update About Ron Weasley’s Future
By El Hunt
Get Even More From Bustle — Sign Up For The Newsletter
From hair trends to relationship advice, our daily newsletter has everything you need to sound like a person who’s on TikTok, even if you aren’t.