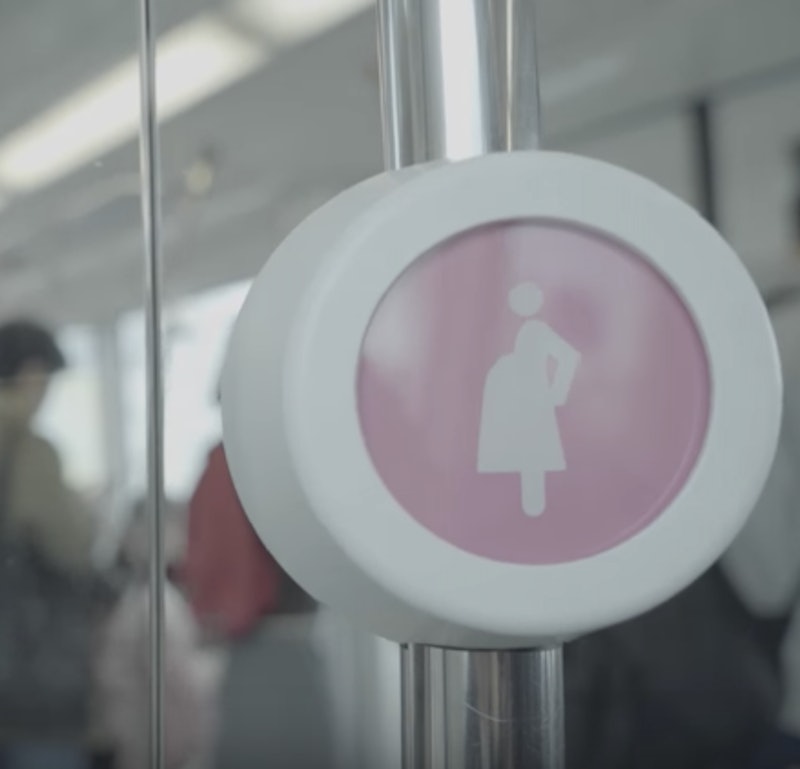 We’ve all been in the embarrassing situation where we see a woman who may be pregnant and want to offer our seat, but are afraid to ask. South Korea may have found a solution for this quandary, launching a trial program using sensor lights for pregnant women on public transit to alert commuters when to give up their seats. The Pink Light campaign had a successful five day trail run on the Busan-Gimhae Light Rail service in the busy port city of Busan, the BBC reports. Five hundred expectant mothers carried special bluetooth sensors on the outside of their clothes and bags that activated pink lights with a pregnant icon on the hand rails above priority seats.

Busan's city council and the Korean PR company, Daehong, collaborated to launch the Pink Light campaign in an attempt to ease the difficulty many pregnant women have finding a seat on a busy train or bus. "Consideration for pregnant women should prevail and they should be able to use public transportation more easily and conveniently with this policy," Suh Byung-soo, Busan's mayor, told the BBC. "Women should be able to use city facilities easily even when they are expecting." The sensors, which have a battery life of six months, set off the pink light when approaching the designated train seat. Once the system detects that the woman is seated, the light above the seat turns off.

If the swollen feet, back pain, and extra weight that offsets balance making riding public transit uncomfortable for pregnant women is not reason enough for passengers to give up their seats, this bright pink alert system certainly should prompt a non-pregnant seated passenger into standing. Other countries have sought to combat the problem of public transport etiquette in their own ways. The New York subways have ads in the train cars encouraging passengers to be conscientious and give up their seats to the pregnant or elderly, while the UK's underground offers free pins to pregnant women that read "baby on board."

While the program seeks to bypass the awkwardness of asking if someone is pregnant and possibly causing offense, it may not be a perfect solution. Ellie Gibson, comedian and host of the parenting podcast Scummy Mummies, told the BBC that this effort "feels a bit like an overly complicated solution to a simple problem." The notification may be a tad too obvious for some, Gibson believes, "I found the level of attention embarrassing when I wore the 'Baby on Board' badge — I'm not sure how comfortable I would feel with pink lights going off when I got on a train."

The pilot program has so far only been tested on one train, but Busan is looking to soon expand it to all trains and buses, Engadget reports. While pregnant passengers are surely grateful for the seats, perhaps fellow strap hangers should work on being a bit more considerate and looking up from their smart phones once and a while.