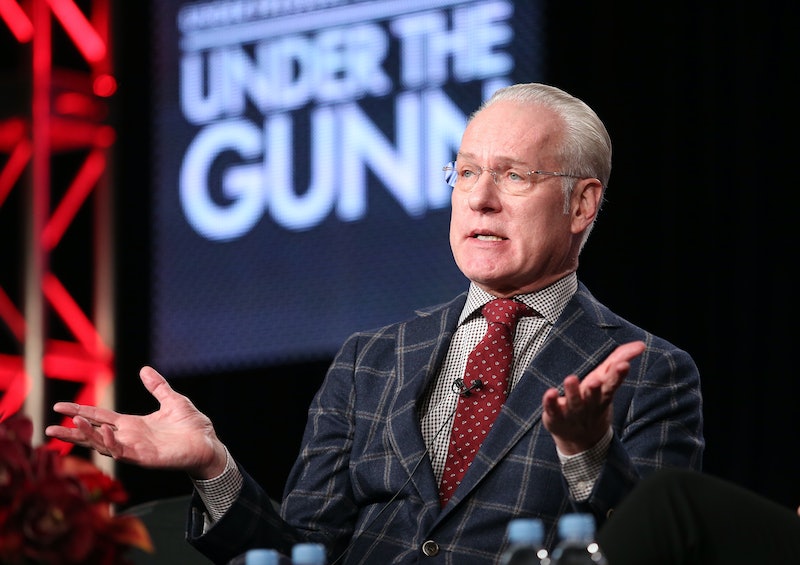 Tim Gunn is like the favorite uncle of the fashion world; aloof but caring, accessible but so much cooler than we ever hope to be. We know all about his opinions on style, but what about the hot-button topics of the fashion industry? It turns out, Tim Gunn might not be all that supportive of transgender models on the runway.

This might come as a surprise, given that Gunn is an openly gay man and vocal supporter of the LGBT community. His stance on the issue does not come from prejudice, but from concern about the (lack of) a range of female body types on the runway. In a statement for HuffPo, Gunn said:

"The fact that fashion designers would put basically adolescent-shaped boys or men in women's clothes is head-scratching for me because, anatomically, women and men have different shapes," he says. "So, to be looking at women's fashion on a tall, skinny guy with no hips, there's no way you can project yourself into those clothes."

He believes that more womanly figures need to come down the runway to repair the damage the fashion industry has done to the collective female body image. Transgender female models, because they were born anatomically male, are often slim-hipped and androgynous. Gunn doesn't think we need more androgynes on the runway.

"I'm conflicted," he says. "On one hand, I don't want to say that because you were a man and now you're a woman, you can't be in a women's fashion show. But I feel it's a dicey issue. The fact of the matter is, when you are transgender — if you go, say, male to female — you're not having your pelvis broken and having it expanded surgically. You still have the anatomical bone structure of a man."

This is a controversial stance for Gunn to take, given that he supports the LGBT community and he risks harming that reputation with these statements. He is clearly not anti-transgender rights. HuffPo's article reports that he seemed "almost apologetic about his stance on trans* models," probably because he knows he might incite anger.

When asked about the Barneys New York campaign featuring transgender models, Gunn supported the idea but said he thought a bigger impact would be made if Target or Kmart produced a similar campaign.

Gunn's comments make some sense, and we can appreciate his concern for the fashion industry's treatment of the female body, but he's kind of missing the point. The Barneys campaign and growing acceptance of transgender models like Andrej Pejic is about using art to bring the transgender community the recognition it deserves.

Social change belongs on the runway. The fashion industry has a tough task ahead as it continues to welcome transgender models and more accurately represent real women's bodies. But we trust the world of high fashion to make it work!