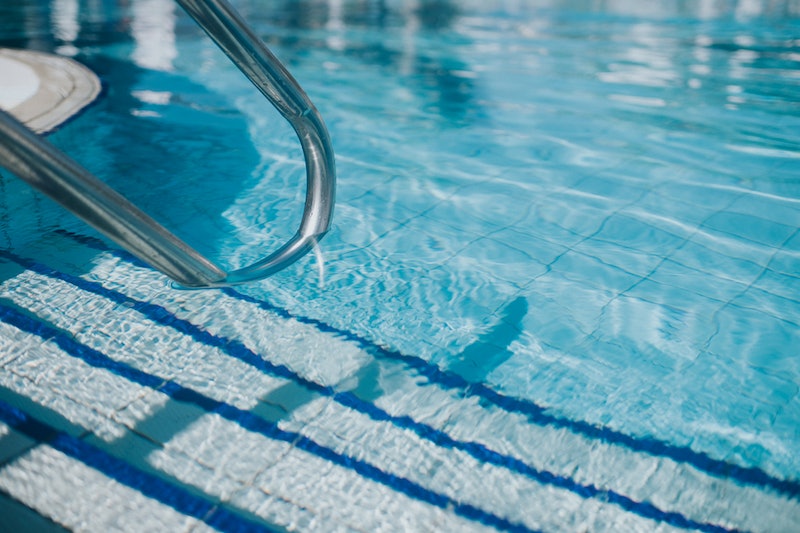 When you're rocking a new piercing, you've got to be extra careful with what it comes in contact with. And as summer is about to come blazing onto the scene, it begs the question, are pools OK? Is chlorine safe for piercings? Chlorine is, after all, used as a disinfectant — so does that mean it'll keep things clean enough to ward off pesky infections? Well, the situation is a little more complicated than you might think — first off, for the chlorine to to work most effectively, the pool has to be kept at a very specific pH. Then, there's the fact that it doesn't instantly kill all forms of bacteria — according to the CDC, most bacterium will be killed in a minute or so, though certain viruses and parasites can last much longer. Plus, chlorine — which is perhaps best known for turning hair green — can also act as an irritant, which may cause extra discomfort for brand new piercings.

So, sanitary or no, it's probably best to avoid swimming pools for a spell when you've got a fresh piercing. No chlorine can kill 100 percent of potentially infection-causing bacteria, and as Britain's National Health Service explains, "It's possible to pick up an infection from any body of water," so pools, rivers, lakes, oceans, and hot tubs should all generally be avoided.

It's a sad fact of life — after all, where better to show off a new belly button ring than at a summer pool party? Well, while you wait the prerequisite 9-12 months for the thing to heal (belly buttons generally take the longest, while tongues and ears can heal much faster), at least you can always lounge poolside...

However you decide to rock your new piercing, just be careful not to fall in! Piercing infections, while both avoidable and treatable, are generally no fun for anyone involved. Of course, it could be fine, but you can never be too careful — especially where piercings are concerned!