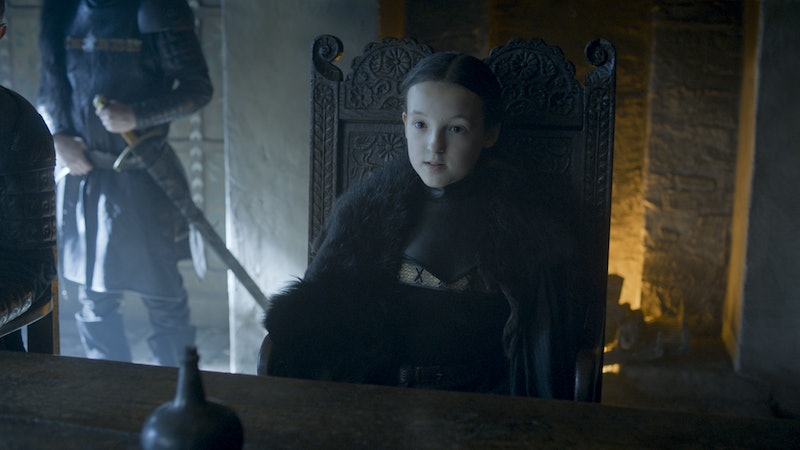 It looks like we've met our new fave Game of Thrones character and her name is Lady Lyanna Mormont. She literally stole the show on Sunday night when she met with Jon Snow, Sansa, and Ser Davos to talk army building. One thing became very clear very quickly: just because Lyanna is 10 years old does not mean she is a child. In fact, the ruler of Bear Island is a straight-up boss. As such, she immediately earned a spot in the GoT fandom's hearts. In a word, Lyanna is iconic, and the reactions to Lady Lyanna's Game of Thrones scenes were as epic as you would expect.

There was sass, ferocity, and straight-up awesomeness oozing out of Lyanna from the moment she came onscreen. I was more than a little nervous when it was first revealed to us that the Starks were speaking with a child leader. Historically, when it comes to kids in leadership roles on GoT, it's incredibly hit-and-miss on their readiness. It became evident very quickly, though, this was not the case for Lyanna. As it goes, fan reactions for Lyanna were not only warm, but they were also positively boisterous. From hailing Lyanna as the new feminist queen to gasping at the shade she threw a certain Stark family member, here are some of the best reactions to our new fave feminist hero in the North.

The tea got sipped so hard when Lyanna told off Sana.

Would she not make the best ruler of the Seven Kingdoms? Get her on the Iron Throne ASAP.

Give Her A Spinoff, Please

I think we'd all pay very good money to see this show happen.

Your New Feminist Idol Has Arrived

She's just giving me serious "down with the patriarchy" vibes, and I'm here for it.

She Doesn't Need A Husband, But, If So, It Should Be A Stark

In all honesty, she's still incredibly young, so, yes, she doesn't need to be married right away. You have admit, though, that the North would be stronger than ever if there was to be a union between the Stark and Mormont houses.

Stay As Motivated As Lyanna

Feeling tired? No motivation? Do you have serious FOMO? Then just re-watch Lyanna's scene and feel the vigor return to your bones.

The biggest takeaway from all of this Lyanna hype? She is an undeniable powerhouse in her own right, and we all need to bow down immediately. Fingers crossed that this isn't the last time she makes an appearance, because GoT is at its most magical with her onscreen.