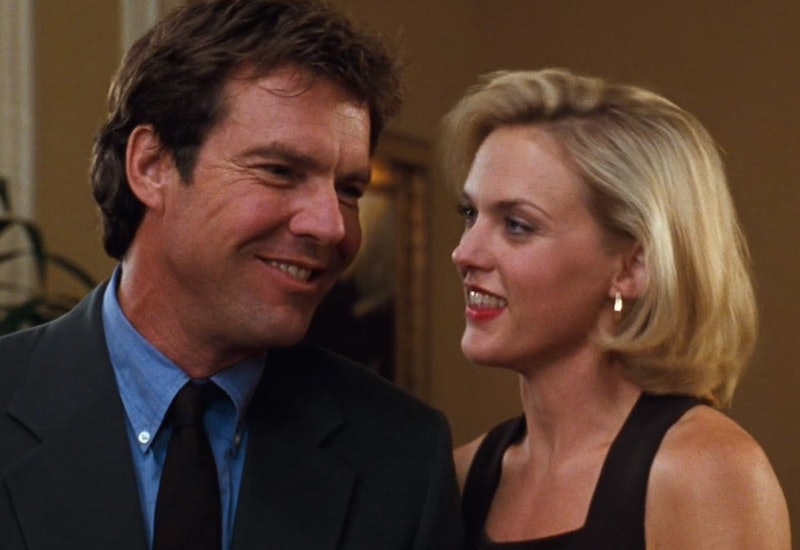 The Parent Trap was one of the few movies that I watched religiously while I was growing up. It not only made me seriously wish that I had a long-lost twin sister somewhere in the world, but it also introduced me to the wonderful taste of Oreos mixed with peanut butter and jumpstarted my efforts to perfect a British accent. I could never quite choose which one of the Lindsay Lohan twins were my favorite between Annie's classiness and Hallie's adventurousness, but, when it came to other characters in the movie, my opinions were much clearer back then. Still — and I can't believe I'm saying this now — Meredith from The Parent Trap actually wasn't so bad. You know, when you watch the film again as an adult with new eyes.

Thanks to Hallie, my Disney-watching mind has always connected their dad's fiancé, Meredith Blake, with Cruella De Vil. Instead of wanting to make puppies into coats, she wanted to steal Hallie's father away and ship the girls off to boarding school. She was every daddy's little girl's worst nightmare. However, in my current, more mature mindset, something about being an adult has me doing a double-take when thinking about the new woman in Nick Parker's life. I mean, she certainly wasn't going to be making puppies into coats. If anything, she was just trying to win over the man of her dreams — before she knew there were two scheming twin daughters involved.

Now, before you freak out, just let me explain. First of all, yes, Meredith was the 26-year-old girlfriend-turned-fiancée of Nick Parker. Not only was the age difference between herself and him, as well as the one between herself and Hallie questionable, but, when you also throw in the fact that Nick was the wealthy owner of a winery and a ranch, it's easy to paint her as a gold digger. However, who's to say that she didn't actually love their father? The entire movie is told from the perspective of two moody teenage girls who desperately want their separated parents to get back together. Any teenage girl would hate the woman who is stealing her father's heart while simultaneously ruining any possible chance for her parents to get back together.

What the movie doesn't show us is Nick and Meredith's actual relationship. I mean, she is able to make Nick happy enough that — out of all of the women he's probably dated — he is willing to introduce her to Hallie. And I don't necessarily take Nick Parker as being a stupid guy. And, what's more, I don't totally believe that Meredith had an negative intentions to begin with.

When we met Meredith's family, they did seem to already be pretty well-off. And, with Hallie away at summer camp, plus the fact that she has no kids of her own, she probably isn't the type of person who really knows how to adjust and relate to someone else's daughter. I mean, when she first started dating him she probably had no idea what she was getting into in terms of the baggage that came along with him having a teenage daughter. Hallie wasn't around, and, in Meredith's own words, from the way Nick talked about her, she thought she would be dealing with a little kid whose affections are much easier to gain. Then, when she was finally introduced to Hallie (aka Annie), snarky comments and judgments were thrown her way right off the bat. The girls never really gave her a fair chance.

Now, don't get me wrong. I don't think I can see myself being best friends with a woman like Meredith. However, while I understand Hallie and Annie's perspective, I also can see how she was thrown for a curveball in the progression of her relationship with Nick. She probably got accustomed to having romantic date nights, lots of alone time, and adult conversations — only to have her now-fiancé seemingly leave her behind to do things like go camping with his daughters and reunite with his ex-wife. For any woman, it would be hard to just sit back and accept changes you didn't even know were coming. The Nick Parker that Meredith fell in love with did not make his lifestyle and relationship with his daughter crystal clear to her at the start of their relationship.

Meredith was a classic case of the Disney-inspired evil stepmother. She wasn't Hallie's mom, and she wasn't Annie's mom, and, in that regard, she was evil. Yes, she said some horrible things about shipping the girls off and rang a house bell for Chessy to come serve her, but, as we see with her family later, that's the lifestyle she was used to. I'm not saying you need to love her, but some sympathy could be thrown her way. Making her carry tons of heavy rocks, having her eat a lizard, and sending her into the middle of the lake when she's clearly not an outdoors person was maybe pushing things just a tad bit too far. Plus, the man who supposedly wants to marry her laughed along with his daughters instead showing more concern for her well-being.

Meredith got the short end of the stick on this one, but she also represents a lesson for all women: Vet out your guys before things get too serious.