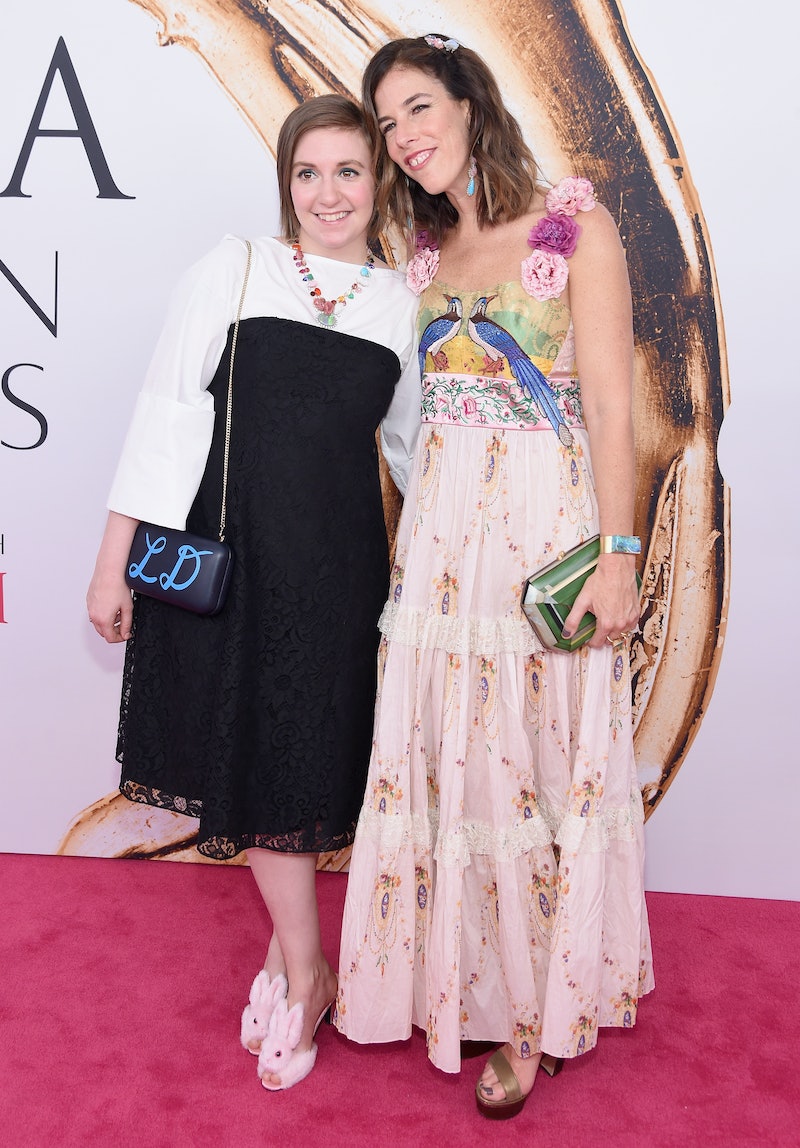 In a move that I didn't totally expect, Lena Dunham totally stole the show at the 2016 CFDA Awards on the red carpet with jewelry designer Irene Neuwirth. The Girls actress and producer attended one of fashion's biggest nights with Neuwirth, who's a CFDA member and known for her colorful jewelry designs. She totally brought that color to the red carpet, and Dunham's black and white look (accented with Neuwirth's jewelry, naturally), was the perfect contrast. But the best part of the outfit was Dunham's furry bunny slippers, which were totally whimsical and so her.

Adding to Dunham's whimsical look was a clutch with "LD" monogrammed on it. Her dress was a custom white cotton poplin and black silk lace dress from Creatures of the Wind's Pre-Fall 2016 collection, which was interesting enough for this fashionable night but let the accessories shine, including her bright beaded necklace, a Neuwirth design. And if you're wondering where Dunham got the adorable bunny slippers, you're in luck. The actress Instagrammed a picture of them a few days ago, and they're from the small fashion brand Streetzies. The company only sells bunny slippers, and they're available for the surprisingly reasonable price of $98. Not a bad price, right? And how cute are they on Dunham?

She and Neuwirth were the perfect pair with their quirky outfits.

I love the personality Dunham brought to this event.

And it looks like Dunham has two pairs of slippers — the pink and blue styles. I wonder how she decided which pair to wear?

Unfortunately for those of you who wanted to buy the slippers Dunham's wearing, it looks like they're sold out right now. If you try to add a pair of shoes to your cart, it'll tell you that all three colors (pink, baby blue,and black) are out of stock at the moment.

I'm sure Streetzies will restock, but it's not too surprising that Dunham's fans already bought out the store's supplies. I mean, those shoes are adorable. In the meantime, I'll be coveting them from home.