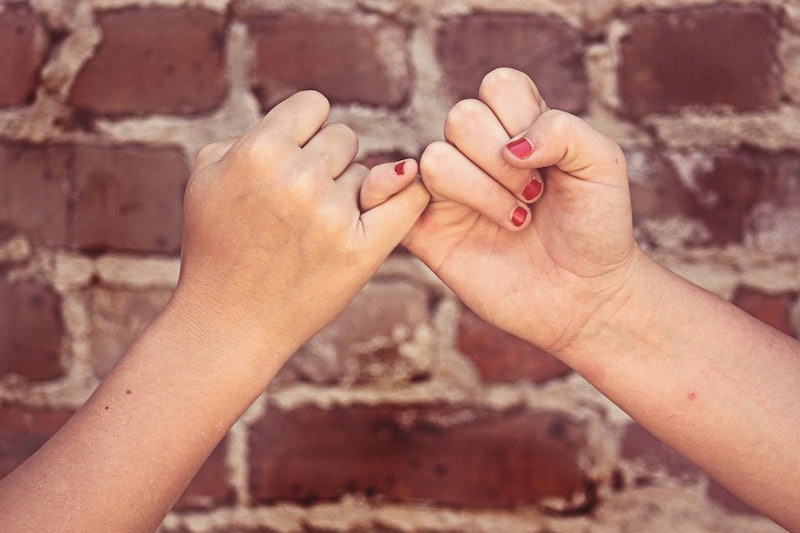 I have a hefty amount of first cousins: somewhere around 11, at last count. (There are a lot. You lose track.) My husband, by contrast, has none, and so he doesn't know the joys of running around family events as a large child-pack causing chaos. But when it comes to the science of cousins, from shared genetics to population-wide relationships, things start to get very complex and interesting, whether you've got a heap of them crowding up your family tree or not.

If you've never had the "X cousin X times removed" status explained to you, the essential model is: first, second, or third cousins are described in terms of their relation to you (first cousins have two of the same grandparents as you, second cousins share great-grandparents, and so on), while their amount of "removal" indicates a generational gap. To be "twice removed" indicates that they're two generations older than you, on the same level as your grandparents, for instance. This sounds like a hell of an annoyance unless you're really into genealogy, but it becomes necessary to understand the terminology when we start talking about cousins scientifically, because degrees of relation and removal have impacts on shared genetic material.

Let's get into some of the weirder things we've discovered about cousinhood over the years, from the science of fertility to the relationship between close friends and fourth cousins.

Surely this isn't actually a thing I need to say, right? Well, it turns out that the science on the actual difficulties with marrying and producing children with first cousins has swung rapidly back and forth from positive to negative over the past decade. The main issue, as you'll likely know, is that close genetic relations between parents may cause serious genetic defects in offspring. It's likely one of the main reasons behind the incest taboo in many cultures, but the science has been interesting recently, to say the least.

In 2008, two scientists called for the ban on first-cousin marriage to be "lifted," describing the rise in birth defects as insufficient reason to make the process illegal. Professor Diane Paul of the University of Massachusetts and Professor Hamish Spencer of the University of Otago compared the risk of genetic defects in babies in first-cousin marriages was roughly the same as the risk in babies born to mothers over 40. (They estimated the risk in both cases as four percent, as opposed to two percent in "normal" marriages, an estimate backed up by a center for genetics in Australia at the time.) Neither scientist believed that was sufficient to advocate for a ban, likening it to a ban on mothers over 40 trying to have kids.

But a 2013 study found that the risk was greater than a two percent rise; it actually represented a doubling. In Bradford, a region of the UK where marriage between blood relatives in the Pakistani community was more common than elsewhere, 13,5000 babies were studied between 2007 and 2011. Marriage to a blood relative accounted for 31 percent of all the birth defects in the babies, and the risk of defects rose from three percent among the general Pakistani population to six percent among married blood relatives.

2. All European Jews Are Distant Cousins

Some of the most interesting science we have about cousins comes from genetic relationships within and between cultures, instead of families per se. And a very cool one turned up in 2014 that suggested that the global population of Ashkenazi Jews, a Jewish community from Central and Eastern Europe whose descendants make up the bulk of American Jews, are all related, thanks to a small pool of shared ancestors.

The scientific team analyzed the genomes of 128 Ashkenazi Jews for similarities, and found that they could estimate the approximate size of the founding population for the Ashkenazi and how long it had been since they'd lived. Apparently, the entire Ashkenazi population worldwide is descended from 350 or so people approximately 800 years ago, making them all 30th or 32nd cousins. The real implications of this, the study's researchers told the Times Of Israel at the time, were to do with the group's particular tendency to get certain diseases: thanks to the genome analysis, "we will be able to more effectively map disease genes onto the genome and thus gain a better understanding of common disorders," said Columbia scientist Itzik Pe’er.

If you regard your friends as like your family, you may be more accurate than you think. Research published in 2014 found that close friends are likely to share quite a lot of genetic material: around the same as fourth cousins, in fact. The study, a collaboration between scientists at Yale and the University of California San Diego, didn't actually find its own data; it used the world-famous Framingham Heart Study, which has been analyzing the genomes and health of a particular community in Massachusetts for decades, and found something very interesting indeed.

Chances are strong, according to the scientists, that at least one percent of your closest friends' genes will mirror yours, which may seem small, but is in fact a pretty big chunk. It's about what you have genetically in common if you shared the same great-great-great-grandparents, or what we call fourth cousins. No, this doesn't mean that you should hunt down your fourth cousins and ask to be friends for "genetic reasons".

4. Having A Cousin With Autism Raises Your Own Risk Of Developing It

One of the interesting things about cousins is that they're usually conceived as quite distant relations; it's why we call things with indirect links "cousins" of one another (if you Google the term, you get frogs, worms, and various Australian animals as "cousins" to humans through newly discovered genetic links, and that's just on the first page). Genetic relationships with cousins are necessarily weaker than those with siblings or parents, which is why this piece of news is so interesting: autism's genetic components are strong enough, according to a 2014 study published in the Journal of the American Medical Association, that your risk of developing autism is raised if you just have a cousin who has it.

The study looked at autism development among extended families, and found a really strong genetic link: if your sibling has it, you're ten times more likely than the general population to be autistic in some way too. And if your cousin has it, your risk is still two times higher. The study concluded that genetics and environment both played a large role in autism's likelihood in a family; but it shows that, for some illnesses, extended family genetics play a bigger role than we may have thought.

If you happen to live in Iceland and have a crush on somebody who's descended from your great-great-grandparents, it's likely you may need to buy more cribs. In 2008, a centuries-long study of Icelandic populations published its conclusions, and it seemed that if couples were related at the level of third cousins, they produced the largest amount of offspring of the entire population. If you were a woman born between 1800-1824 and married your third cousin, you'd produce an average of 4.04 children, but if you were unlucky enough to marry an eighth cousin you'd only produce 3.34. And the trend continued in the 1900s; people married to their third cousins produced 3.27 kids, compared to eighth cousins' paltry 2.45.

What in the name of bizarre family reunions is going on here? The scientists involved thought that third cousinship, in some weird way, must improve human fertility, but they're not entirely sure why. It's not just in Iceland, either. In 2013, a study of communities in Northeastern Brazil found that couples who were closely related produced an average of 4.3 kids, as opposed to unrelated couples, who produced an average of 3.5; and a 1993 study of Pakistani communities found something similar. But this pattern hasn't been repeated in every study of populations, and explanations for why genetic relations might produce more kids aren't really forthcoming. Either way: you may want to get genetically sequenced before marriage if you come from the same part of the world. Just sayin'.