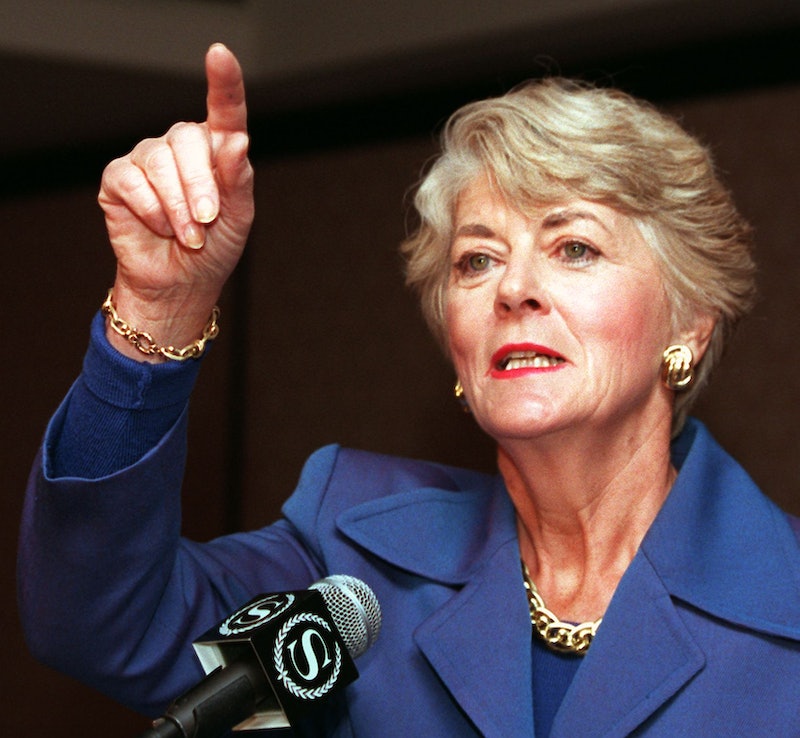 How to describe our excitement? The thrill, the pride, the tingle of joy, with a woman, finally, in reach of the White House?

Wait. I’m talking about 1984, when Geraldine Ferraro ignited waves of euphoria as the first woman to run for vice president on a major party ticket. “A Ticket for History,” boasted Newsday after Democratic presidential nominee Walter Mondale selected her as his running mate. Ferraro, a smart and sassy three-term congresswoman — a liberal from a blue-collar district in Queens, New York — seized the moment: “American history is about doors being opened,” she said, as millions of women inhaled the fresh wind of change flattening two centuries of political barricades.

One week later, her acceptance speech at the 1984 Democratic National Convention was electrifying. An ocean of women on the floor of the Moscone Center in San Francisco (wearing coveted floor passes donated by male colleagues, so they could savor the moment) danced in the aisles, turning the presidential nominating convention into a giant group hug. In the New York delegation, leading feminist and three-term Congresswoman Bella Abzug passed out cigars stamped, “It’s a girl!”

As the ABC News Correspondent assigned to cover this unique race, I kept my own satisfaction in check when Peter Jennings asked me to describe the supercharged crackle on the floor. “She is a genuine star, and these people hardly know her,” I said into my microphone. “Although I keep running into members of Congress who all suddenly insist they are her best friend.” From the podium, the 5’2” woman with the firm voice confirmed the promise in so many hearts:

As columnist Ellen Goodman noted, breaking the secret for many of us, “An unprofessional wave of goose bumps went up my writing arm.”

So, how come I’m not feeling the tingle today?

Don’t get me wrong: Hillary Clinton is more than the right candidate for the Democrats, for America, for a world trying to navigate the critical challenges of the 21st Century. And not because she’s the lesser of two evils. Strike that. There’s only one evil force. But somehow, “Hill-a-ry” doesn’t get the emotional juices flowing the way “Ger-ry” once did.

Maybe it’s because Ferraro was our first First, even though her role was secondary. And maybe it’s because pushing the “presumptive” button doesn’t trigger the same elation as “I accept your nomination.” Or maybe it’s because Clinton’s wonkiness and hyper-caution, shaped by decades of missteps and hostility in public life, just aren’t as sexy as the short-lived pizzaz from a newcomer known as “a housewife from Queens.”

And maybe the emotional thing doesn’t matter at all. But it surely has a lot to do with the woman thing.

Remember, Ferraro was appointed, after a lobbying effort from her few sisters in the House, by a man who sought “a” woman at a time when the gender gap was working against the Republicans. It was a leap of hope for the Democrats’ uphill fight against a very popular Ronald Reagan, and damn the critics who whined about pandering. “Half the human race is not a special interest,” Gloria Steinem explained.

That’s largely how Ferraro campaigned: “This candidacy is not just a symbol, it’s a breakthrough,” she said over and over. "It's not just a statement: It's a bond between women all over America." That line guaranteed cheers on the stump, from women — and men — of both parties, who came to be part of the history. They brought their children, mostly little girls, and held them up during rally after rally to show them the possibilities for their own future.

She’s been elected by her party because her credentials are catnip for anyone who cares about experience, because she’s got plans and policies and a vision that might just work. And while she’s a first class feminist who has fought for women’s rights and human rights — a moral equivalency she first advocated nearly two decades ago — she stopped pitching her historical case when it wasn’t working. So, when Donald Trump accused her of playing “the woman’s card,” I had no idea what he was talking about, other than his own inability to play with a full deck. Of course, Clinton is running as a woman. What’s her alternative? But she doesn’t bring it up so much now because voters don’t seem to care so much.

Ironically, she’s the victim of her own, and Ferraro’s, success.

In the Reagan Republic of 1984, Ferraro’s previously unthinkable candidacy was about possibilities. We’d welcomed one female Supreme Court justice, several female NASA astronauts, and yes, a few lonely voices in history, from Belva Lockwood and Victoria Woodhull during the suffrage years, to last century’s Margaret Chase Smith and Shirley Chisholm, who had launched brave little test runs for President. But never before had someone in a skirt actually been on a major party ticket, or on the debate stage, right up there with the potential Prez. A pro-choice Catholic, she was the first major politician to talk about abortion and credibly say, “If I were pregnant…”

Ultimately, the ecstasy didn’t translate into votes. The Democrats lost every state but Minnesota in 1984. And while folks generally don’t cast their ballots on vice presidential candidates, Ferraro’s lack of foreign policy experience, and the allegations about her husband’s business dealings didn’t help. (Her husband, John Zaccaro, pled guilty to a misdemeanor fraud charge in 1985 and was found not guilty on charges of extortion in 1987). She had to defend his decision about releasing tax returns.

Ferraro also had to prove that femininity was no barrier to leadership. When asked on NBC's Meet the Press, “Could you push the nuclear button?,” Ferraro responded simply and strongly: "I can do whatever is necessary to protect the security of this country." And during her debate with George H.W. Bush, she found the sitting vice president “patronizing” when he offered, “Let me help you with the difference…” about a Middle East issue. That was just after Barbara Bush had publicly called Ferraro, “I can’t say it, but it rhymes with ‘witch.’”

It wasn’t a smooth ride. But being on the ticket broke a barrier for more female presidential wannabes. The breathtaking “possibility” became a given. And while Sarah Palin briefly turned our feminist dream into a joke, the fact remains: if Palin could run, couldn’t anyone?

Now, it isn’t just anyone, it is Hillary Clinton, whose unlikely path from First Lady to U.S. Senator to Secretary of State, makes her a candidate like no other. We no longer say, “Isn’t it time?” We say, “Isn’t it time, already?” Shouldn’t this have happened already? What are we waiting for?

I won’t bother listing all the double standards Clinton has had to duck. But look where we are: she’s debated more men than could ever qualify for the Oxford, sometimes three in an evening; she’s negotiated the Middle East treaties that once were created by men; and she’s the one insisting her likely male opponent cannot be trusted with the nuclear codes.

No, Clinton is not a saint. But we don’t need a saint. And I’m sorry that surveys say people don’t find her likable, but politics is the art of the possible, not the lovable. And that speaking voice? As New York Times columnist Gail Collins says, she is the only candidate who has been “simultaneously criticized for yelling and for putting people to sleep.”

Give me a break.

In 1984, we thought the millennium had arrived. In fact, it took six more election cycles to get a woman on the ticket — but it was Palin. Two more cycles, and here we are.

We’ve gone from begging, then settling, for a room of our own to demanding the keys for, then kicking in the doors to all those other rooms; from banging our heads against all those obstructive glass ceilings to slipping through the “18 million cracks” leading to higher floors and the world of opportunity. Once, like Little Lulu, we fumed at being locked out of the clubhouse where Tubby had scrawled “No Girls Allowed”; now, we claim the White House, where anatomy is no longer destiny.

So, excuse me if there’s no time for goosebumps, not right now. There’s too much work to do. But come next January, when the hand on the Bible is one that has struggled with pantyhose and changed diapers and signed treaties, I’m guessing that the electricity will start to flow again. I can almost feel it now.