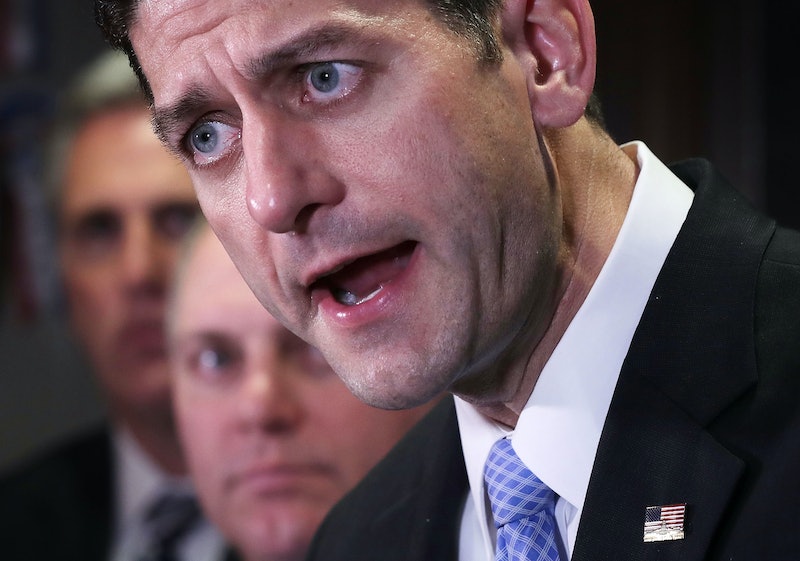 Although he said last week that he would vote for Donald Trump, Paul Ryan criticized his comments about Judge Gonzalo Curiel, who is presiding over a Trump University lawsuit. The speaker of the house called Trump's remarks about Curiel being too biased to oversee the lawsuit because he is "Mexican" (Curiel was born in Indiana) the "textbook definition of a racist comment." Over the past week, the presumptive Republican presidential nominee has criticized the U.S. district judge, accusing him of being biased against Trump because of his heritage. On CBS's Face the Nation on Sunday, Trump said that a Muslim judge could also possibly be too biased to rule on a case involving him because of his proposal to ban Muslims.

Ryan is hardly the first Republican leader to denounce Trump's comments. Former speaker of the house and Republican presidential candidate Newt Gingrich told Fox News that Trump's remarks were "inexcusable." Trump's former competitor for the Republican nomination, South Carolina Sen. Lindsey Graham, went so far as to tell The New York Times, “This is the most un-American thing from a politician since Joe McCarthy.” Graham also said:

If anybody was looking for an off-ramp, this is probably it ... There’ll come a time when the love of country will trump hatred of Hillary.

New Hampshire Sen. Kelly Ayotte also told The New York Times that Trump's comments were "offensive and wrong," and that he should retract them. Ayotte, like Ryan, has also stated that she intends to vote for Trump in the general election.

More like this
Christina Aguilera Took A Powerful Stand At Brighton Pride
By Sam Ramsden
It’s Official: 'The Bachelorette' Is No Longer A Fairy Tale
By Samantha Allen
Scotland's First Period Dignity Officer Has Sparked Backlash
By Darshita Goyal
A Political Thriller Inspired By The Munich Massacre Is Coming Soon
By Darshita Goyal
Get Even More From Bustle — Sign Up For The Newsletter