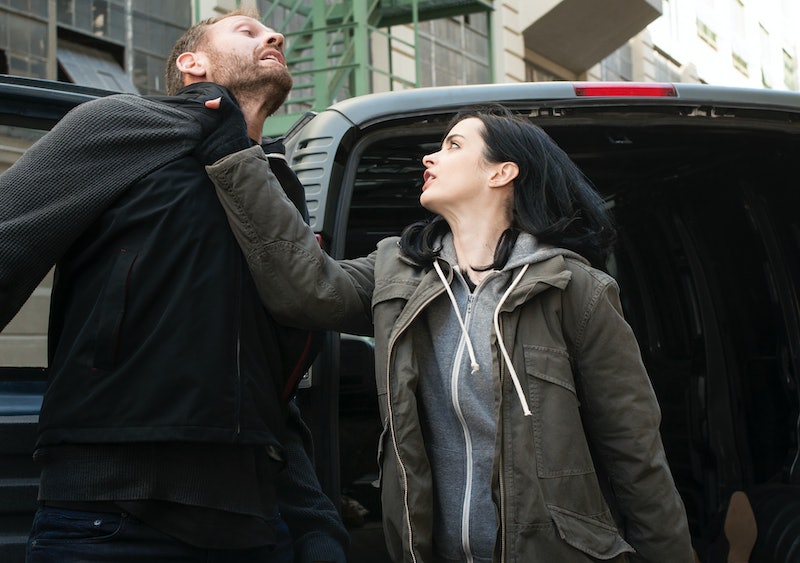 If you've seen Netflix's female Marvel superhero in action, then you know that she can kick butt. She has an attitude that proves she doesn't care what anybody thinks, and there's no messing with Jessica Jones. The showrunner of the Netflix hit, when crafting the adaptation of the superpowered badass from comics to screen, had a certain vision in mind for the character. In fact, Melissa Rosenberg wanted to avoid one big thing in Jessica Jones that is all too common in many shows: the male gaze. Jessica was no one's sex icon, and she was never going to be put on display in that way in the series. According to Rosenberg,

Despite how obvious of a choice this may be, getting Jessica Jones to make this powerful statement in the realm of the show was not necessarily an easy feat. Rosenberg also mentioned the numerous times she had to steer the show away from putting Jessica in a strip club-type setting, and how she had to take careful action when dealing with the show's topics including, "rape, abortion, interracial relationships" and more. (Curiously, Rosenberg says she got the most flack for the interracial relationship than any of the charged topics on the show.) The fact that the showrunner made such a point of not turning Jessica into a sexpot of a character, even for the length of time it would take her to infiltrate a strip club, is amazing.

According to Rosenberg, this was part of the reason that Krysten Ritter became a first choice for the role. It was Ritter's stint on Breaking Bad, and her comedic edge from Don't Mess With The B, that put her on top of the list of possible casting choices. The showrunner made it clear in the roundtable that Ritter was the full-package deal for the demanding scripts, and that casting was not based on the actresses looks right off the bat. The fact that Ritter also happens to be beautiful is just an incidental bonus.

Now, however, it's the future of Marvel superheroes that I've got in my sights. While we saw Daredevil 's Elektra holding her own with more of a sex appeal-based edge, I'm curious to see how the rest of the Hell's Kitchen's heroes will formulate when it comes time for the spin-off series, The Defenders . Honestly, Jessica Jones was the perfect female superhero to help pave the way to a new world in which a female superhero isn't even partially defined by how hot she is or how many skimpy outfits she can wear. And a new world in which, hopefully, no more missions involve a female character infiltrating a strip club.