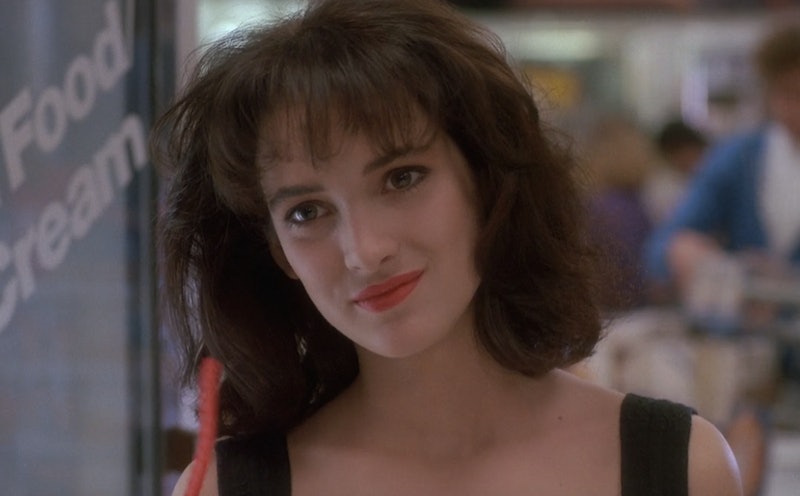 Winona Ryder started acting in the '80s with her first film Lucas, and now she's revisiting the decade 30 years later in the new Netflix series Stranger Things. On the show, which debuts July 15 and has been described as a "love letter to the '80s," Ryder plays a mother whose son disappears mysteriously. But that isn't the only strange thing going on in this Indiana town. We're talking "top-secret government experiments, terrifying supernatural forces and one very strange little girl." This isn't the first time Ryder's appeared on TV, but it is Ryder's first starring role on the small screen. Being that it's been a while since fans have seen Ryder in a leading role — 2012's The Letter, to be exact — it seems like this is the perfect time to revisit her past big screen work.

For those who were too young to remember the Winonassaince of the '80s and '90s, she was the alt It Girl. With her black hair and fair skin, she was the actress you wanted to be best friends with. She was obviously talented, but she also seemed relatable. Her appeal being that she was cool without even trying. She didn't seem to care about trends; she made everything her own. Before Ryder attempts to take over the small screen, it's time to revisit her best moments on the big screen. The moments that will have you thinking about getting your own "Winona Forever" tattoo.

Lydia Deetz may be the most goth character put to film. Her mood is as black as her wardrobe. Ryder barely seems to open her mouth to mumble, in monotone, her lack of interest in anything but the deceased couple she spots in her attic. Lydia is a strange and unusual girl who her parents may not understand, but most of us do. And clearly Ryder did as well, being that Lydia is by far her most iconic role to date.

Before Mean Girls there was Heathers, the dark, dark comedy about a group of popular high school girls with who lose their Queen Bee. Ryder gets to play the only Heather not named Heather, who really does all of the damage, accidentally killing the lead Heather with a lethal dose of Drano. It's all pretty tongue and cheek (Remember Big Fun's PSA "Teenage Suicide"?), but it's what made this film a cult classic. And the reason you'll never look at a red scrunchie the same way again.

As Myra Gale Brown, Ryder gets to play Jerry Lee Lewis' child bride like a naive bubble gum-chewing bobby soxer. In Ryder's capable hands, the 13 year old isn't an innocent girl being taken advantage of; she's a Lolita with an attitude. She's snotty and unafraid to speak her mind. You can't help but like her — even if the whole relationship leaves a bad taste in your mouth.

In Burton's quirky take on Beauty and the Beast, a very blonde Ryder gets to be the object of affection for man with scissors for hands. Ryder plays this one quiet, saying little throughout the film, but letting her facial expressions say it all. She's kind and tender with Edward, understanding that there's more to him than meets the eye. It's that innocence and acceptance she exudes that makes Kim's romance with Edward seem like one of the most tragic love stories ever told.

After growing up with her eccentric mom, played by Cher, Charlotte has decided to live her life in a way that's entirely opposite by deciding she'll be a nun. Never mind the fact she's Jewish. After getting a crush on an older man, though, she struggles to figure out who she is. Ryder gets at what it's really like to be a teenage girl — the manic feelings, the indecision, the struggle to find yourself. But she does it in a way that feels almost like it wasn't acting, like it was just real life.

In this Jim Jarmusch film, Ryder is a chain-smoking cab driver who just wants to be a mechanic. Ryder pulls off the tough girl with a heart act perfectly, embodying a devil may care attitude as she helps an uptight casting agent get to her destination. Ryder gave us a fully formed female character that didn't care what you thought of her; she was just fine in her own skin.

Ryder's Mary may seem like the innocent one as she watches her fiancé fall in love with another woman. But we soon learn Mary's got her own secrets that Ryder is very good at hiding. She's not naive, but better at playing the game than anyone. The doe-eyed Ryder does the "poor me" naive act well, but, in the end, she isn't the one getting played; she's the one doing all the playing.

This movie should be a prerequisite for any college graduate. As Lelaina Pierce, a recently graduated Valedictorian who loses her entry level job at a morning talk show, she shows us what it's like to really graduate, to lose your job and have to start over, to have to swallow your pride and learn to suck it up. Yes, reality does bite, but Ryder makes it seem like it's a rite of passage. One that should definitely be soundtracked by "My Sharona."

Jo was the sister who could not be tamed in Louisa May Alcott's classic. The one who was ahead of her time, too strong-willed to believe marriage was her ultimate goal in life. Ryder brought that fierce stubbornness Alcott had put on the page to the big screen, giving young girls everywhere a complex female character that strived to be more than what society told her she could be.

This passion project had Ryder playing author Susanna Kaysen, who wrote the memoir of the same name about her 18-month stay at a mental institution. This is Ryder like we've never seen her before, showing off her dramatic range to tell a story about women that we rarely get to see. As Susanna, Ryder is like Alice in Wonderland, being our eyes and ears to what is going on around her. What she sees is heartbreaking, as is her performance.

Ryder is the ghost of ballerinas past in this Darren Aronofsky film. She's the aging prima ballerina who been told she's past her prime and isn't too happy about it. She also isn't going quietly, playing mind games with Natalie Portman's Nina, who is already struggling with her mental state. Ryder's part isn't big, but she gets the moment in this film that you'll never forget.

This sweet stop-motion picture from Tim Burton about a boy named Victor who brings his dog back to life has Ryder basically reprising her role as Lydia Deetz in animated form. But that doesn't mean Ryder didn't bring something new to Elsa Van Helsing, a gothic grade schooler who seems to understand Victor's pain after losing his beloved pet. Ryder's voice perfectly captures the empathy of a little girl who is wise beyond her years.

Ryder may not be making three films a year anymore, or even a film every three years, but, one thing is very clear: her body of work still holds up after three decades.