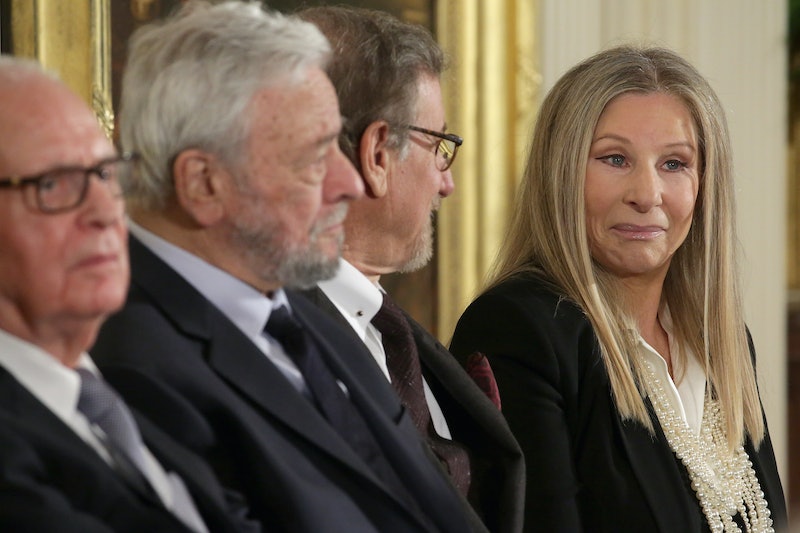 Hello, fellow fans of everything good in the world. You ready for some news that will make your Tonys watch even sweeter? Deadline has reported that Barbra Streisand will attend the 2016 Tony Awards. That's right, resident Funny Girl and unofficial musical fairy godmother will be hitting the ceremony stage for the first time since 1970. For context, that's the year The Beatles broke up. Yeah. It's been a while. That time around, Streisand took home a statue for "Star of the Year," a non-competition Tony that added the "T" to her illustrious EGOT crown. It's unclear whether Streisand will be the recipient of another career award this year, but it has been confirmed in that Deadline article that she will be presenting an award at the ceremony. The unparalleled singer has been performing for over fifty years, and was last nominated for an in-competition Tony in 1964 for her fantastic, role-defining performance in Funny Girl, which she eventually brought to the screen. Streisand went on to boundary-breaking fame, eventually winning two Oscars, five Emmys, and eight Grammys. But how many Tonys has Barbra Streisand won?

The technical answer, it turns out, is none. The previously mentioned "Star of the Year" award doesn't officially count by nature of being honorary, rather than competitive — and the two prior times Streisand was nominated, she lost to other nominees. It's kind of a shocker, but in light of her fantastic career, it's clear that Streisand doesn't need statues to prove her immense talent. I mean, did you see The Way We Were?

Most likely, Barbra is surfacing at the Tonys to promote her tour Barbra: The Music, The Mem'ries, The Magic , where she will perform her hits from the last six decades, plus songs from her new album, ENCORE: Movie Partners Sing Broadway. But, whatever the reason the musical gods have gifted us with a visit from someone as flawless and lovely as Babs, I'm just happy to see her back on stage. Here's my "Streisand at the Tonys" wishlist — because based on her track record, it might be a little while before we see her back again.

Number one on the docket: Barbra has gotta sing. Fingers seriously crossed for a Funny Girl number — watching Streisand sing-yell "life's a ball of butter" would officially make this ceremony one for the books.

If Funny Girl isn't on the docket (or even if it is), I could totally get into a duet performance. Carole King's going to be there, so will Nathan Lane — heck, Oprah Winfrey's making an appearance. What happens if Orpah and Barbra touch? Does the world explode? I want to find out!

Few performers have got as much talent as they do charm, but Barbra has got both in spades. I could hear this queen of Instagram read her social media comments aloud and be pretty happy, but give her some quippy dialogue with James Corden or another awesome guest (Steve Martin, perhaps?), and that would be totally tops.

During her intensely long career, Barbra has slowly been grooming her style icon status, and I can only hope she'll turn out some sparkle/choker combo to blow all of us away. We are not worthy.

More like this
Hugh Jackman & Deborra-Lee Furness’ Relationship Timeline Started With A Mutual Crush
By Hugh McIntyre
15 Spiciest Looks From The 2022 Tony Awards
By Dominique Norman
Zooey Deschanel Can't Be Anyone But Herself
By Samantha Leach
What Is Ariana Grande's Net Worth? When It Comes To Money, She Has No “Problem”
By Hugh McIntyre
Get Even More From Bustle — Sign Up For The Newsletter