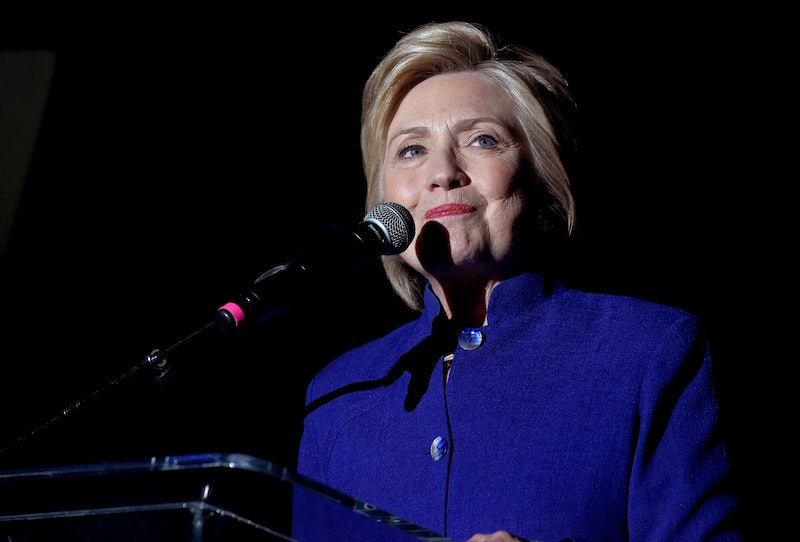 It was a historic moment 238 years in the making; a moment that American women likely won't forget. On Tuesday night, Hillary Clinton took to the podium at Brooklyn's Navy Yards and celebrated her Democratic nomination. Following Tuesday's primaries, Clinton became the first woman politician to win enough delegates to secure the presidential candidate on a major party ticket — a feat that is truly worth a victory lap. In her speech Tuesday night, Clinton acknowledged that she finally did what she couldn't do in 2008: smash the most powerful glass ceiling in America. "It may be hard to see tonight, but we are all standing under a glass ceiling," Clinton said at the opening of her speech.

OK, but maybe she didn't really smash — or need to. "Don't worry, we won't smash this one," Clinton said.

It was certainly a different feeling for Clinton now, who spent the last eight years mulling a second presidential run in between serving as secretary of state and squashing attacks from Congress Republicans. But tonight was finally her moment, and she seemed to be enjoying it.

"For the first time in our history, a woman will be a major party's nominee for President of the United States," she said.

The centuries-old fight for women's rights in America was the theme of Clinton's victorious speech. She acknowledged how this win did not just belong to her, but to all the women who came before her, such as the suffragists who convened in Seneca Falls in 1848 and jump-started the national movement for women's suffrage in the United States, and Clinton's own mother. "We reached this moment thanks to the struggle and sacrifice of generations of women and men," Clinton said.

Later, Clinton commemorated her mother, who would have turned 97 on June 4. "Some of you may know the significance of that date," the Democratic nominee said. "The day my mother was born, Congress was passing the 19th Amendment to the Constitution. That amendment finally gave women the right to vote."

"I really wish my mother could be here tonight," Clinton continued. "I wish she could see her daughter become the Democratic party’s nominee."

Clinton has discussed her mother in the past, but tonight, given both the historic and emotional weight of this moment, it felt even more personal. "She was my rock," Clinton said of her mother. "She overcame a childhood marked by abandonment and mistreatment, and somehow managed not to become bitter or broken."

The Democratic nominee then used the life lessons her mother taught her all those years ago to take a jab at Donald Trump. "[My mother] taught me to never back down from a bully, which it turns out was pretty good advice," Clinton said to a round of applause and laughter.

Prior to her speech, the Clinton campaign played a video highlighting major moments in feminist political history, including the 1848 Seneca Falls convention, and Shirley Chisholm, the first African-American woman to run for president. The video also included Clinton's famous feminist quote that has been the backbone of her politics for over two decades: "Women rights are human rights."

Trump, who is the presumptive GOP nominee, made several appearances in Clinton's victory speech. Clinton accused Trump of "trying to wall off Americans from each other."

She also went after the business mogul's "Make America Great Again" slogan. "That is code for, ‘let’s take America backwards.’ dignity was reserved for some, not all," Clinton said.

To counter Trump's message of discrimination, Clinton formed a message advocating for a more inclusive America where dignity and opportunity is available to all. "We want to write to the next chapter in American greatness, with a 21st century prosperity for everyone who’s been left our and left behind," Clinton said.

Clinton had a big day on Tuesday, winning primaries in a number of contests across the nation, including New Jersey. Just a day before, the Associated Press, NBC News and CBS Politics proclaimed Clinton the presumptive Democratic presidential nominee, and it appears those news outlets made the right call. Clinton secured the 2,383 delegates needed for the nomination following Tuesday's primaries, defeating her challenger, Sen. Bernie Sanders.

Clinton gave a shout-out to Sanders and his fervent supporters. She thanked the U.S. senator for bringing his progressive policies to the national stage and igniting conversations on income inequality, living wages, and increasing social mobility for all. "[These debates] have been very good for the Democratic party and for America," Clinton said.

But the Democratic nominee didn't focus too much on Sanders. Instead, Clinton tried to bring Sanders supporters to her side in a consistent, fierce battle against Trump. "[Trump] wants to win by stoking fires and running salt in wounds, and reminding us daily just how great he is," she said, placing an emphasis on "great" with a smile. Yet Clinton, too, can — and will — remind us how great she is. She may have smashed one of the toughest glass ceilings out there, but there's still an election out there, as well a higher, stronger, and sharper glass ceiling that must be shattered for good.