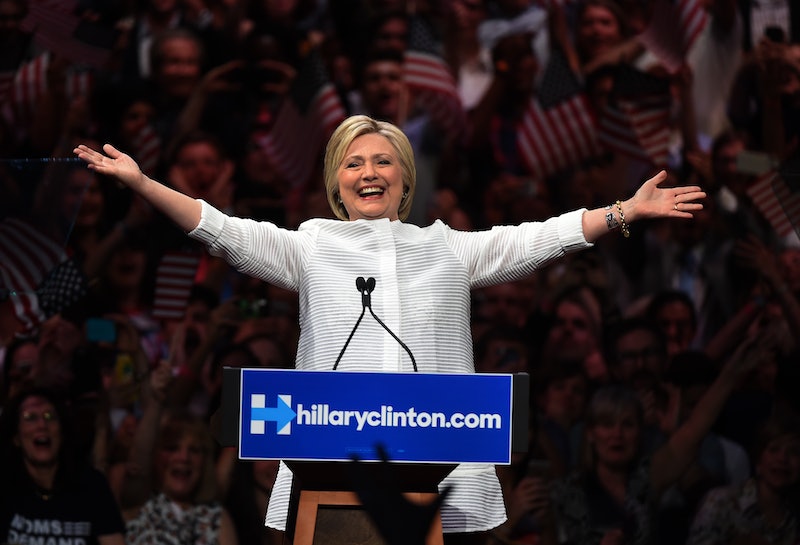 In a warehouse in Brooklyn, Hillary Rodham Clinton gave what is effectively a victory speech after the Associated Press and other media outlets reported that she had enough pledged delegates plus the support of enough superdelegates to clinch her party's nomination. And Clinton praised Sen. Bernie Sanders and his supporters during the beginning of her address, and wasn't stingy, either.

Crediting the debate that has sprung forth from this election contest as "very good for the Democratic Party and for America," Clinton's overture to the big tent of Democrats could be summarized as "all's well that ends well."

Reaching out to the Sanders camp immediately, and with this language, is meant to foster a sense of party unity and healing amidst an ongoing election process. But at this point, now matter how flowery Clinton's praise, it is unlikely to cause Sanders to have a change of heart — he has repeatedly said that he, and his backers, will work to contest the Democratic National Convention in Philadelphia this July.

Clinton's olive branch to Sanders and the diverse coalition of backers both inside (and outside) of the Democratic Party is a necessary first step if she is going to attempt to gain their support in the general election against the presumptive nominee of the Republican Party, former reality show participant Donald Trump.

Because without the support of pretty much the entire Democratic Party membership as it exists in its current form, it becomes increasingly unlikely that she will be able to triumph in the general election against Trump, who I'd argue may very well be a pure manifestation of the Id.

No word yet on any reaction from the Sanders camp to Clinton's specific remarks, or what concrete concessions she may make to Sanders supporters who have brought the conversation about income inequality, living wages, and increasing social mobility for all to the forefront.