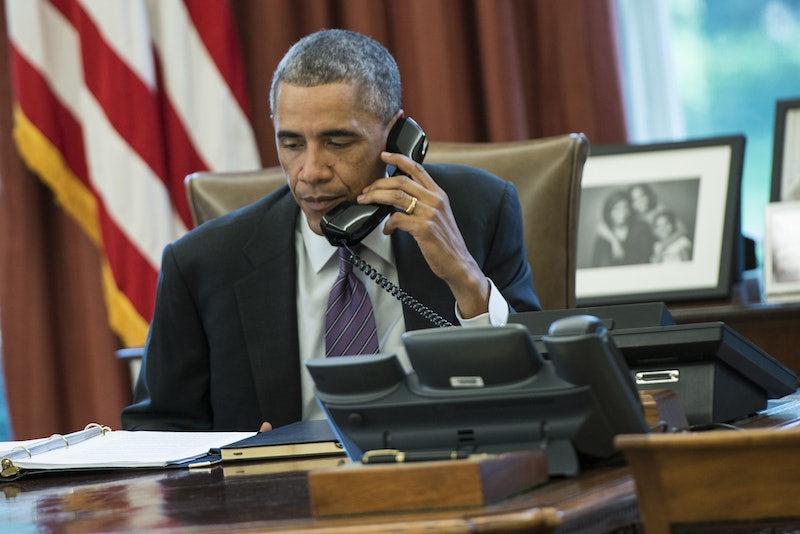 On Tuesday evening after the primaries had mostly ended, President Obama called Hillary Clinton and Bernie Sanders to speak to them both, and congratulated Clinton for having "clinched" the nomination.

Speculation about an Obama endorsement for Clinton has stirred since she first announced her candidacy last year, and this White House statement pushes the president ever-closer to making a formal endorsement of his former Secretary of State. This news comes at a somewhat-serendipitous time — exactly 8 years ago, Clinton conceded her first presidential bid to then-senator Obama, offering a heart-felt speech in support of the man who would make history. This makes Obama's statement and personal call to his friend and former cabinet member all the more poignant.

Besides congratulating Clinton on her presumptive nomination, President Obama reportedly congratulated both candidates on energizing their Democratic bases, acting as catalysts for helping "a new generation" enter politics, and highlighting inclusive policy issues that affect everyday Americans rather than focusing on "those with wealth and power".

The statement claims President Obama also congratulated Sanders on his success in "energizing millions of Americans" through his rhetoric about income inequality and special interests, and will meet with Sanders (at the Vermont senator's request) at the White House on Thursday to discuss "significant issues" surrounding income inequality that are paramount during this election.

During a town hall-style meeting in Indiana last week, the president cryptically claimed that the Democratic nominee would be clear "by next week". The day before the June 7 primaries, sources in the White House reported President Obama could make a formal endorsement as early as this week. With Clinton's declaration of her presumptive nominee status, it could be a matter of days or even hours before the president explicitly announces his support of his former rival-turned-colleague for president.

While the overtones of the president's statement match the furor surrounding the presumptive Clinton nomination, they also echo another poorly-kept Democratic secret: that the party hopes for unity between the Clinton and Sanders camps against Trump to help secure a win in November. The wording and structure of this White House press release make that desire very clear, highlighting the joint successes of Sanders' and Clinton before discussing Clinton's presumptive nomination.

Obama's imminent endorsement of Clinton is special in another way, too — he's the first second-term president in years popular enough to be "a potent force on the campaign trail". With the support of another history-making politician, Clinton could make a strong case against Trump in the general.