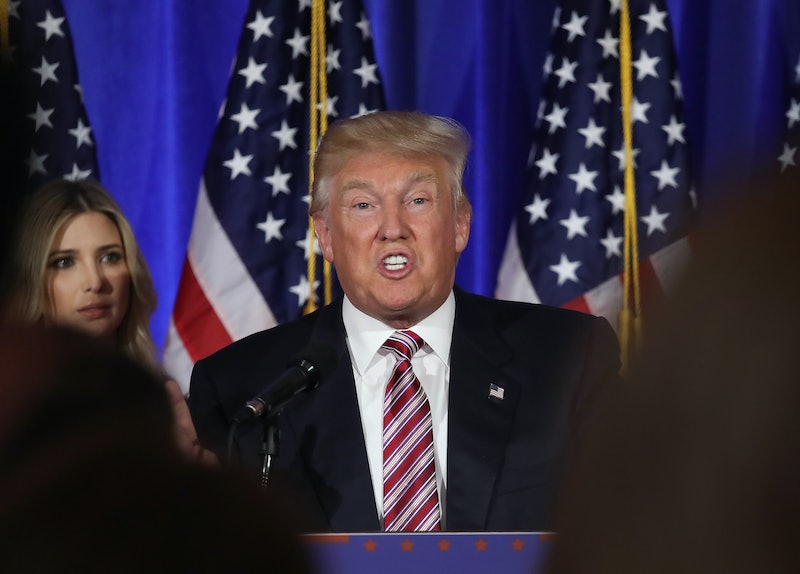 Not even a week after Paul Ryan reluctantly endorsed Donald Trump, he’s having to apologize for him. On Tuesday, the House Speaker distanced himself and his party from comments Trump made about Indiana-born District Judge Gonzalo Curiel. In case you've decided to stick your head in the sand until the election is over (and really, who could blame you?), here's the recap: Speaking with CNN's Jake Tapper last week, Trump suggested Curiel, who is presiding over a lawsuit against Trump University wouldn't be able to do his job because "he's a Mexican" (Curiel was, in fact, born and raised in Indiana; he is of Mexican heritage). In a hunter-becomes-the-hunted twist, the party that has capitalized on dog-whistle politics to rally its base is now getting bitten by it.

Now, a lot of Republican leaders — like Lindsey Graham, Mitch McConnell, and even Newt Gingrich — are taking a stand against a man they fear is a nominee who could potentially implode their party, or the party they want. Although many GOP leaders are incredulous that the same guy who was a leading proponent of the “birther movement” against Obama and launched his campaign by saying, “[Mexicans are] bringing drugs. They're bringing crime. They're rapists,” could be one voting day away from the White House, maybe they — and the rest of the country — shouldn't be all that surprised. There's evidence that the GOP only has itself blame for creating the real possibility of a Trump presidency.

For years, Republican politicians have danced around racism in ways far more subtle and, perhaps, less disturbing than how Trump currently does. Remember Rep. Michele Bachmann’s anti-Muslim witch hunt in 2012, which involved accusing the Muslim Brotherhood of infiltrating our government? Or in 2010 when New York Congressman Peter King claimed that “80 to 85 percent of the mosques in this country are controlled by Islamic fundamentalists"? I believe that rhetoric leads to a candidate like Trump being elected, despite the party leaders' best efforts.

Let's back up even further. Many trace this type of rhetoric back to 1981, when Lee Atwater (a Republican strategist in the Reagan era) gave an interview exposing the party's strategy to hide racist and other unsavory policies. There are so many horrifying things he says in the interview, including what he really means by "states’ rights" (code for, according to Atwater, resisting federal mandates to integrate schools and society) and "cutting taxes" (meaning, for the rich, not the poor). Listen to the interview (below) to hear Atwater outline these tactics.

It is hard to deny that fears about racial and cultural differences are what's rallying a significant cohort of Republican voters, and it's disappointing as an American to see that playing to hate and anxiety can be so successful. A Pew Research poll found that of Republicans who see immigrants as “threaten[ing] traditional American customs and values,” 59 percent view Trump "warmly." Among Republicans who think immigrants "strengthen" American society, only 30 percent view Trump so favorably. Another study by Daniel Byrd and Loren Collingwood, called "Racial Resentment and Candidate Choice Among White Americans," found that 81 percent of Trump's white voters have "High Racial Resentment" as opposed to 40 percent of Clinton's, 43 percent of Sanders', and 58 percent of white voters overall.

The good news is, though, that Trump's outrageous behavior is bringing these issues to light in a substantive way. The takeaway? Instead of running away from the shame of the racist past this country has, we should listen to it, talk about it, and learn from it. If famous "shame expert" Brene Brown has taught us anything, it's that, "If you put shame in a Petri dish, it needs three things to grow exponentially: secrecy, silence, and judgment. If you put the same amount of shame in the petri dish and douse it with empathy, it can't survive."