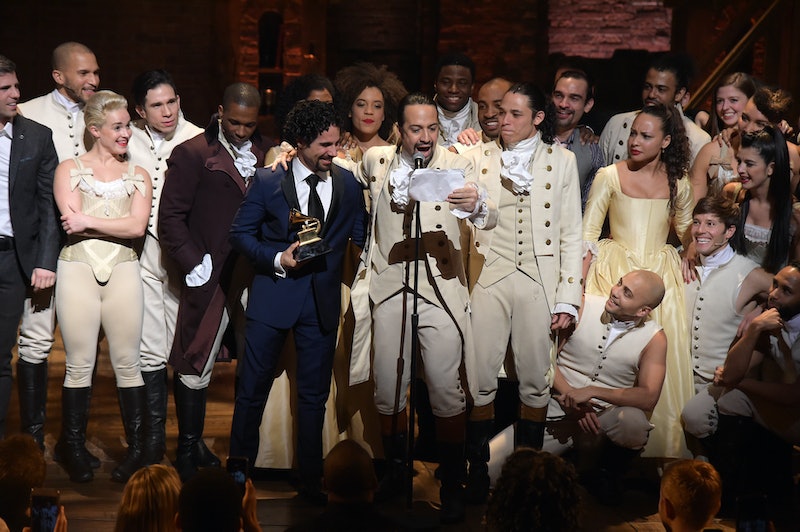 How does a show using hip-hop to tell the story of the American Revolution through the eyes of Alexander Hamilton become a cultural phenomenon? There's no one answer, but it's clear that the Hamilton train isn't slowing down anytime soon as it heads into the Tony Awards ceremony with an unheard of 16 nominations. According to the New York Times, Hamilton has the most Tonys nominations ever and is both a critical and commercial success. With the Tony-nominee record broken and the Tony-winner record, currently held by The Producers with 12 wins, in its sights, what other records does the already-classic show already have under its belt?

While it certainly feels like it's the best-selling show in Broadway history considering how difficult it is to get tickets, Hamilton has a long way to go before it can compare to shows like the billion-dollar grossing efforts of Wicked and The Lion King that have been running for over a decade. However, if Hamilton continues to play to sold-out crowds, there's no telling just how much success lies ahead. While it has yet to break any major Broadway records, Hamilton has already managed to break some pretty impressive smaller records already, which is pretty amazing for a musical that hasn't even had its first Tony ceremony yet.

The Richard Rogers Theater on Broadway has housed a number of famous shows including the original productions of Guys & Dolls and How To Succeed In Business Without Really Trying, as well as Lin-Manuel Miranda's first Broadway success In The Heights. Despite having some legendary musicals in its history, Hamilton holds the record for highest-ever one week gross, bringing in nearly two million dollars in one week, according to Forbes. Pretty impressive for a 1,300 seat theater.

In November of 2015, when Hamilton was just beginning its world takeover, a production spokesperson for the show claimed that it had made $57 million in advance sales, according to Playbill. Unfortunately, there's no evidence to back that up as Playbill also reported, "A spokesperson for the Broadway League would not confirm or deny the claim, saying the League does not track advance sale figures."