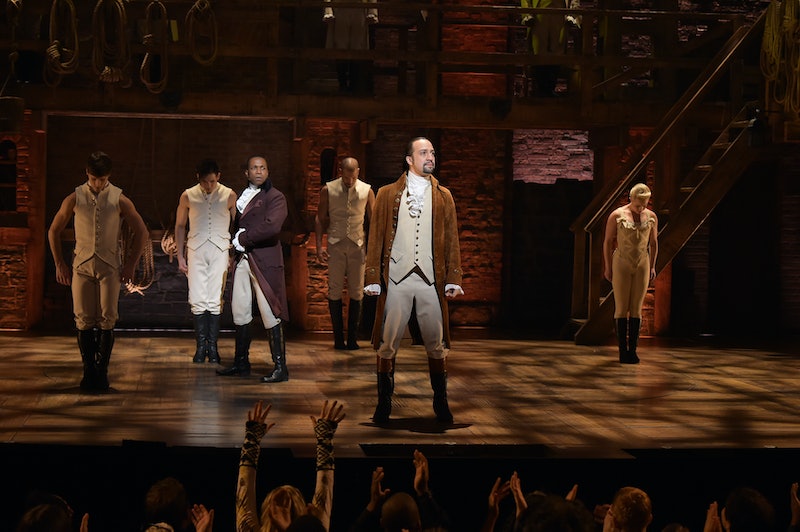 Since Hamilton debuted on Broadway last year, Lin-Manuel Miranda's hip-hop musical has entertained audiences in droves — well, those who can score tickets to the perennially sold out show — and increased the interest in its protagonist: Founding Father Alexander Hamilton. But is Hamilton historically accurate in its portrayal of the former Secretary of Treasury? According to many sources, a good amount of the Pulitzer Prize-winning Broadway juggernaut's story and lyrics come from real events. In addition to playing Alexander on stage, Miranda wrote the music, lyrics, and book for the Tony-nominated Hamilton, a process during which he brought on Alexander Hamilton historian Ron Chernow as a historical consultant.

Chernow is the author of a comprehensive 2004 biography Alexander Hamilton, a book that inspired Miranda to write Hamilton, according to Playbill, and Miranda has stated many times that he strived to keep Hamilton as close to history as he could. "I felt an enormous responsibility to be as historically accurate as possible, while still telling the most dramatic story possible," Miranda told The Atlantic in a 2015 interview. "And when I did part from the historical record or take dramatic license, I made sure I was able to defend it to Ron, because I knew that I was going to have to defend it in the real world. None of those choices are made lightly."

Chernow told the New York Times' T Magazine that Miranda's Hamilton is pretty close to who historians know the Founding Father to be. “I think he has plucked out the dramatic essence of the character — his vaulting ambition, his obsession with his legacy, his driven nature, his roving eye, his brilliant mind, his faulty judgment,” Chernow said.

So what's totally true and what liberties did Miranda take in the crafting of Hamilton? Check out below who lives, who dies, who tells his story (accurately).

In Hamilton: Not only are the two men rivals, but they are complete opposites. Hamilton is a poor immigrant from the West Indies who is brash, bold, poetic, and all about making a difference right now (evident in the songs "Alexander Hamilton," and "My Shot"). On the other hand, Burr is a son of privilege who is calm, cool, concise, and cautious (listen to "Wait For It"). These two philosophies lead the men to clash through out the American Revolution, the U.S. Constitution, and their law careers.

In "Non-Stop," Hamilton admits to Burr, "You're a better lawyer than me" and asks him to help defend the Constitution in The Federalist Papers, which Burr rejects due to his cautious nature. The rivalry between the two men becomes strained as they ascend in the ranks of government (hear it in "The Room Where It Happens," "The Election of 1800," and "Your Obedient Servant"), ending in the famous duel in which Burr shoots and kills Hamilton in Weehawken, New Jersey in the song "The World Was Wide Enough." As the musical concludes, Burr exhibits some remorse, realizing that he will be labeled as the villain by future generations.

In Real Life: While only Hamilton and Burr themselves can confirm a rivalry, Chernow did write in his Hamilton biography that the two men seemed to lead parallel lives, even passing the bar and setting up their respective legal practices during the same year. According to the book, Hamilton was loquacious and charming and Burr was "terse and convincing," but Hamilton did admire the way Burr practiced law:

His arguments at the bar were concise. His address was pleasing, his manners were more—they were fascinating. When I analyzed his arguments, I could never discern in what his greatness consisted.

According to ConstituionFacts.com, Hamilton consulted others to help with the Federalist Papers , but there is no record of him asking Burr for help. The Hamilton-Burr Duel occured on July 11, 1804, after their insults during the Presidential election of 1800 reached a fever pitch, according to the History Channel. While they weren't on the best terms at the end, Burr often spoke of his rival as "my friend Hamilton — whom I shot" and showed little remorse for the killing, according to Chernow's book.

In Hamilton: Angelica Schuyler sings in "Satisfied" about how her father has no sons — only daughters Eliza, Peggy, and herself — so that's why, as the eldest daughter, she must prioritize marrying rich and let the smitten Eliza marry the penniless, but charming Alexander. That doesn't stop Alexander and Angelica from mercilessly flirting and matching wits in their letters, though.

In the song "Take A Break," Angelica and Alexander lament about missing each other a little too much and, just like anyone with a crush, Angelica over-analyzes Alexander's placement of a comma in a letter.

In a letter I received from you two weeks ago / I noticed a comma in the middle of a phrase / It changed the meaning. Did you intend this? / One stroke and you’ve consumed my waking days / It says:"My dearest Angelica" / With a comma after “dearest.” You’ve written / “My dearest, Angelica.”

In Real Life: According to an interview by Genius, Miranda "forgot" that the Schuyler sisters had 12 other siblings — and yup, some of them were sons. Angelica was already married to British businessman John Barker Church when she met Hamilton. "I think that my brain wanted me to forget because it’s stronger dramatically if societally she can’t marry [him]," Miranda said.

But the letter flirtations were definitely real and involved crucial misplaced commas — or perhaps intentional slips? Miranda pointed out this exchange on Twitter last year:

According to a letter by Angelica in the National Archives, she once inserted a comma when writing, "Indeed my dear, Sir." In another letter in the archives, Alexander teases her about it with some good ol' 1787 grammar nerd flirting.

You ladies despise the pedantry of punctuation. There was a most critical comma in your last letter. It is my interest that it should have been designed; but I presume it was accidental. Unriddle this if you can. The proof that you do it rightly may be given by the omission or repetition of the same mistake in your next.

In Hamilton: Hamilton, Burr, Laurens, and Lee recite the "Ten Duel Commandments" in the song of the same name. The 10 rules include "If they don’t reach a peace, that’s alright / Time to get some pistols and a doctor on site" and "Look ‘em in the eye, aim no higher / Summon all the courage you require."

The commandments are revisited in two other duels in the musical: Hamilton's son Philip gets shot and killed by George Eacker in a face-off during "Blow Us All Away," then Hamilton and Burr's fatal encounter in "The World Was Wide Enough."

In Real Life: According to PBS' American Experience, an American code duello really existed and provided the rules for resolving disputes via trial by gunshot. In the 1777 code, there are more than just 10 rules, though — there are 25.

In a verified Genius annotation, Miranda wrote that the song also takes inspiration from Biggie Smalls' "Ten Crack Commandments." "This is not what happens today with our gun control issues," he said. "It was super codified; there was a ritual about it. It was like legal arbitration — with guns."

In Hamilton: Hamilton's bright political star falls when he pursues a torrid affair with Maria Reynolds in the song "Say No To This," in which he doesn't say no — he says yes to it for awhile. About a month into the affair, Maria's husband James not-so-kindly blackmails Hamilton into paying for his silence about the relationship:

Jefferson, Madison, and Burr find out about the affair and confront Hamilton, accusing him of using government funds to pay off the Reynolds couple in the track "We Know." Hamilton proceeds to write the The Reynolds Pamphlet to defend himself against charges of embezzlement, as he also exposes his own dirty deeds. In the song "The Reynolds Pamphlet," Hamilton's contemporaries read it and gleefully sing "He’s never gon’ be President now."

In Real Life: According to the real Reynolds Pamphlet, Hamilton really did have an affair with Maria Reynolds and it became the nation's first political sex scandal. Maria's husband James Reynolds did indeed blackmail Hamilton for his silence about the affair. Some of the lyrics from the song "The Reynolds Pamphlet" come verbatim from the actual Reynolds Pamphlet, including the fact that he had "frequent meetings with [Maria] / most of them at my [his] house" while Eliza was visiting her father with their kids.

In Hamilton: Once word gets out about Hamilton's affair, his wife Eliza is heartbroken and she goes to burn all of the letters from their relationship in the song, well, "Burn." She sings:

And the audience's heart breaks right along with her.

In Real Life: According to Chernow's book, Eliza destroyed her own letters to Hamilton, but it is unknown when, why, and how. An analysis in The New Yorker suggests that Miranda wrote this song to explain not knowing what Eliza thought.

In Hamilton: After Hamilton's death, Eliza sings about maintaining his legacy — and establishing her own — during the 50 more years she lives on, as described in the finale track "Who Lives, Who Dies, Who Tells Your Story." She goes through all of his writings to preserve them, but Eliza sings that the accomplishment she's most proud of is establishing the first private orphanage in New York City. It's her ultimate tribute to Hamilton, who grew up as an orphan.

In Real Life: Yup, Eliza did all of those things and lived until she was 97 years old. Hamilton's writings are in the National Archives as "The Hamilton Papers." In 1806, Eliza helped found the Orphan Asylum Society of the City of New York, which is known today as family services agency Graham Windham.

In 1818, she established the Hamilton Free School, the first school in Washington Heights in NYC, according to a tweet by Miranda, who grew up in that neighborhood and, ahem, wrote a Tony-award winning musical based there called In The Heights.

"It was a confirmation — I was supposed to do this," Miranda told Grantland about the fated coincidence. And that's become apparent as Hamilton has captivated Broadway, New York City, and, on Sunday night, hopefully the Tony Awards, too.