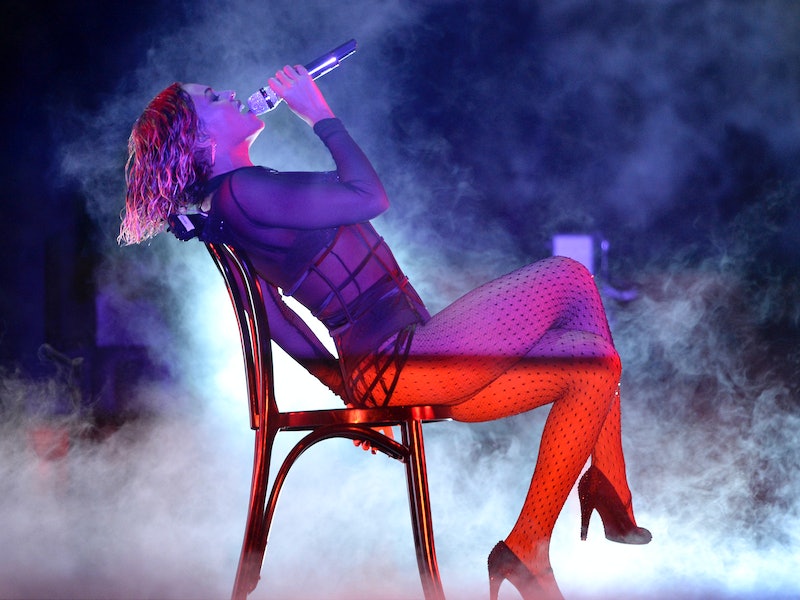 Oh Bey, how kind you are to us. On Monday, Beyonce released her "Partition" music video, from her visual album, Beyonce, to the public. Even though the video was already on the album, it was released as a stand-alone video since "Partition" is Bey's newest single. If you already bought the album (duh) you've seen it, but you probably should watch it again, because it is steamy. If you haven't seen it, you're in for three minutes and 49 seconds of R-rated Bey and a Jay Z cameo.

"Partition" is known to be the most explicit song off the album, since the track is about a bored wife attempting to seduce her disinterested husband. Although, does Bey ever really have to seduce Jay? Good acting on their part.

In different scenes, Beyonce dresses up in sexy glasses, a trench coat, a G-string thong, a bedazzled headpiece, knee-high black boots, and gets leopard print lights to cover her at a strip club, where Jay Z looks on. Blue Ivy, cover your eyes, because this is straight up not appropriate for children. But just know that your mom is the hottest ever in this video.

You can watch the "Partition" video below:

More like this
Everything To Know About The 2023 Grammy Awards
By Jake Viswanath
Beyoncé & Blue Ivy Performed A "Brown Skin Girl" Duet At Her Private Dubai Concert
By Brad Witter
Twitter Is In Awe Of Taylor Swift’s “Lavender Haze” Music Video
By Jake Viswanath
Miley Cyrus' "Flowers" Lyrics Reveal She’s Done With Liam Hemsworth For Good
By Jake Viswanath
Get Even More From Bustle — Sign Up For The Newsletter
From hair trends to relationship advice, our daily newsletter has everything you need to sound like a person who’s on TikTok, even if you aren’t.